Home » International Inclusion: Bridging The Culture Gap Among BC Students 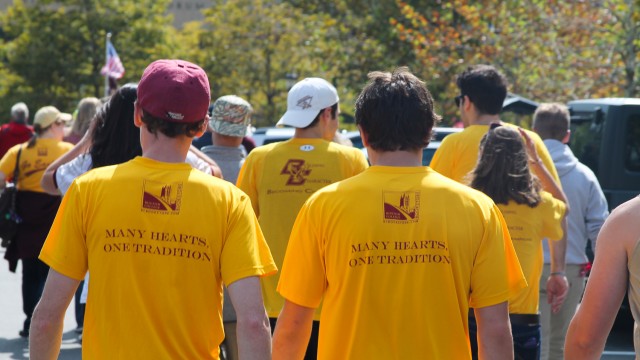 International Inclusion: Bridging The Culture Gap Among BC Students

About a year ago, Boston College FACES released a video to raise campus awareness about offensive dialogue on the popular social networking app YikYak. The video featured students reading offensive posts from YikYak, posts that were submitted anonymously by others in the BC community and which often exhibited racist, sexist, or homophobic undertones. Of particular note at the time—both on YikYak and in the FACES response—was the amount of comments made in relation to BC’s international student population, with East Asian students in particular being the focus of many jokes.

While YikYak’s role on campus and many of its loud critics have faded over the past year—either due to the app and BC students cleaning up their act or a general lack of sustained interest in using the platform—many of the same sentiments about East Asian international students seem to exist, often finding their way into campus chatter even if they are no longer posted to a social network.

It is not an uncommon observation for any member of the BC community to remark on groups of East Asian international students almost exclusively interacting with one another. The base reaction for many people may be that these international students prefer to have things this way—they are acclimating to living and studying in a new country, and their comfort could lie in being surrounded by those with whom they have no language or cultural barrier. At some level, this is likely true. But this also comprises the logic that perpetuates a campus divide between students who have been raised in the United States and those who have not—the East Asians often encompassing the most striking and noticeable example.

To better understand this divide, it is necessary to consider the motivations behind an international student’s decision to attend school in the U.S., and in particular, his or her decision to enroll at BC.
While students are undoubtedly drawn to the quality of secondary education in the U.S., conversations with international students on campus along with international assistants that have exposure to them reveal a certain fascination with the United States’ reputation as a land of diverse people and ideas. Often not found—particularly in East Asia—amid economies that are still developing and populations that are far more homogenized, students come to BC seeking not just an education, but to make friends who don’t look like them, speak like them, or think like them.

These students, however, face roadblocks upon their arrival that help isolate them from the larger University community. Assimilation is potentially very difficult for international exchange students who come as sophomores or juniors and interact with BC students who already have established friend groups and housing situations. When they are only spending a semester or two on campus, it is virtually impossible for them to forge meaningful relationships with many members of the broader BC community if people don’t make efforts to reach out to them—even for international students who spend four years on campus.

As a junior, I have found through my own experiences that the few international friends I have are relationships I have built solely through involvements on campus in which I have worked directly with them. While these relationships are without a doubt authentic and significant to me, I cannot help but think they wouldn’t exist had I not been put in positions wherein I had to work with them. If the relationships were left up to chance within BC’s ordinary social scene, I am confident that they likely would not exist.

If BC is to take the next step in fostering the best possible learning experience in and out of the classroom, the burden falls on students themselves to build relationships that last longer than the initially uncomfortable conversations. While it is the international students that come to the U.S. seeking transformative educational and interpersonal experiences, students raised here must also realize that there is much to be gleaned from meaningful relationships with those that have grown up in vastly different environments. The number of international students at BC has already increased fivefold since the mid 1980s, and this trend will likely continue in the foreseeable future. As more and more of the world’s best students come to the Heights, the currently noticeable campus divide between them and the rest of the community will only grow if American students do not change their mindset and approach to friendships.

In the end, building even just one authentic friendship with an international student will be worth infinitely more than any and all discomfort experienced within the first conversation or two. But we will never know this until we try.