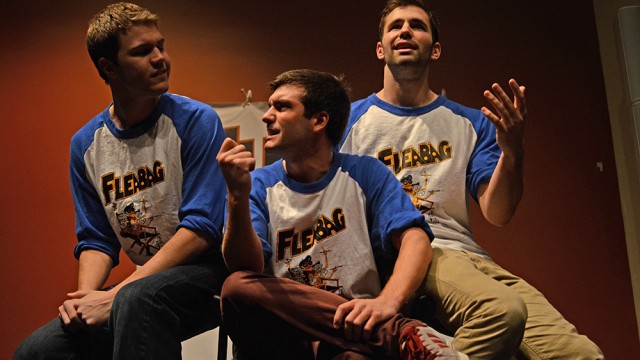 My Mother’s Fleabag left the group’s historic venue of the O’Connell House behind this weekend and took on Vandy’s Cabaret Room for the first time for its 35th Anniversary Spring Big Show. The Cabaret Room—35 times less flammable than O’Connell and far more spacious—proved a necessary setting for the group’s Spring Big Show on Friday and Saturday night. Fleabag came back far bigger than last semester. The dazzling Amanda Hoffman, A&S ’17, went from blonde to fiery red dye. Tatiana Schaefer, A&S ’16, returned from studying abroad, making an appearance that was sorely missed in the fall. Even Sara Elzeini, A&S ’18, spat some fire in the group’s ending opera—there’s no way the O’Connell House could’ve handled this performance.

Although the Cabaret Room allowed for an additional 50 people to enjoy the night’s quips, some folks were still unable to find seats. But that didn’t deter them—many people elected to stand for the entire performance or sit on the floor wherever there was space. People got especially creative on the top floor, stacking coffee tables, chairs, friends, or  literally anything stackable to be able to see some Fleabaggers in action. The Cabaret Room immediately felt like Fleabag turf. The group’s energy made the space come alive and feel just like every other show in the old house.

Fleabag has always made its show an interactive one, allowing the audience to get in on the fun, so the group naturally started off the night by bringing up an audience member. The game was called Double Blind. The audience member was asked to arrange two of the Fleabaggers into any position they wanted and, from that position, the Fleabaggers had to create a scene. Someone could then yell “Freeze!” and two other members would take it from there. Two notable moments were when Matt Hession, CSOM ’16, and Schaefer took the stage and Hession yelled out “I’m sorry but I don’t want any girl scout cookies!” to which Schaefer responded with a nine millimeter.

Another stand-out scenario occurred in the Radio DJ segment—once again, troupe members took suggestions from the audience for types of radio stations. What they came up with was Canadian NPR, Christian radio, hip-hop’s hottest hits, and experimental. Chris Prall, CSOM ’17, Pat Genovese, A&S ’15, Jenna Postiglione, A&S ’17, and Hession put on a hilarious performance as Schaefer switched from station to station, flipping from “and here we see where our bacon really comes from, and I ask you, is it worth it, ay?” to “POP PIP pope POP,” to “and now for our next tune, ‘God put a baby in me,’” to popular hit “’Ayo, where your girl at?’ ‘Oh she in labor, she in labor.’”

The troupe then switched from improv wear into costumes for a skit. Hoffman and Genovese played Boston natives Bobby and Marla, who couldn’t help but interrupt a tour guide (Elzeini) as she described Boston’s most popular destinations to two English tourists—Catrin Assaf, A&S ’18, and Prall.  As Elzeini discussed Cambridge and Newbury, Bobby and Marla countered it with “Cambridge isn’t real Bahston” and “Newbury? Ya can’t buy a stick a gum there foh less than 12 dollahs.”

Soon, the Fleabag shirts were back on and Ben Halter, A&S ’16, and Genovese were clumsily determining where they stood in their relationship as roommates in a game called Half-life. Genovese came up to Halter and asked “Hey, uh, why did you stick your foot in my peanut butter?” to which Halter responded, “I wasn’t sure where we stood as roommates so I decided to stick my foot in your peanut butter.” Soon, the two decide to stick their feet in each other’s peanut butter and jelly together, but as they are bending down, they accidentally end up on top of each other. Genovese, one of the directors, then shouts out that the scene needs to be shorter, so he limits it to 30 seconds. He continues to limit the scene until it solely becomes Genovese yelling “Peanut butter!” Halter yelling “Jelly!” and both of them jumping on top of each other.

In another standout game, Hoffman and Katron used their positions, as set up by an audience member, to create a scene about a butternut squash harvest and the rekindling of a relationship between farmer and field mouse. Hoffman, the farmer, spotted Katron, the field mouse, eating all of her crops. After discovering that the field mouse was actually rather well-groomed, however, they decided to work it out. Alex Dzialo, A&S ’15, and Prall then joined them on stage, asking Hoffman, “Hey Ma, why ya talkin’ to a field mouse?” In the end, everyone except for Dzialo decided to join in on a group hug. Dzialo wouldn’t even look at the field mouse.

The group ended the show with a final song, the theme of which was “panty droppers.” All clad in boxers, the members performed a slew of hilarious musical numbers about BC. Schaefer sang, “Better get me an Honest Tea or that’s the last you’ll see of me!” Elzeini rapped—and the group ended on the same final note—“I like the way you preach it … Go Iggity!”

All in all, My Mother’s Fleabag did just what was expected—their jokes made for countless laughs. There’s a reason that so many people flock to see them. Each member of the group feeds off of each other’s energy, adding a piece of themselves to each performance, and ultimately creating an unforgettable scene.

“Fleabag is an extraordinary world,” she said. “The way every practice feels like coming home, the way we can read each other’s minds, the feeling of security on stage because there’s a family backing us up … it really is extraordinary. We’re so confident up there because we know there are 10 brothers and sisters that have our backs.”

The group clearly had a blast on stage, and the audience had a blast as a result. This year’s directors, Dzialo, Sean Bloomstine, A&S ’15, and Genovese left their roles with a bang, as they put on one hell of a final show this weekend. There’s no doubt that their charisma has left a lasting impression on audiences over these past four years at BC.