Home » ‘A Gentleman’s Guide’ To Love, Fame, Success On Broadway 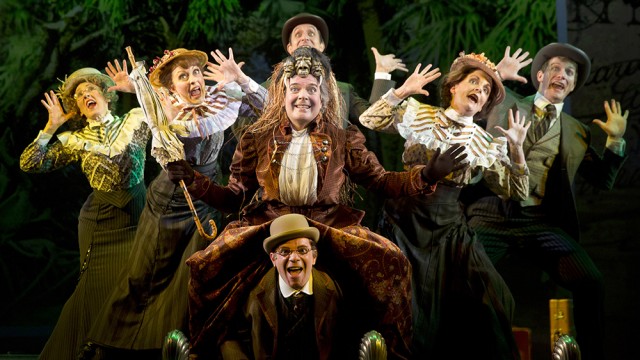 ‘A Gentleman’s Guide’ To Love, Fame, Success On Broadway

I always love the people who keep their phones out after the “Please Silence Your Phones” warning before any show. They just need to get that last urgent update from their son or daughter, boyfriend, or girlfriend, before a performance begins, before they isolate themselves from that oh-so-important world outside of the here and now for two painstaking hours or so.

But at last Friday’s performance of A Gentleman’s Guide to Love and Murder, the Tony award-winning Broadway hit in New York, everyone in the audience was teeming with an anticipation that even their cellular devices couldn’t intrude on.

I am not at all a thespian. I can greatly appreciate the effort that goes into creating a live performance like a play, especially one on Broadway. The expertise that goes into perfecting the minutia of every scene, every minute, is incredible. But for some unfathomable reason, I get incredibly bored in the second act of whatever it is I am seeing. In spite of this irritable habit, A Gentleman’s Guide to Love and Murder not only put me in gut-busting laugh attacks on my first go around a couple years, it put me into an even worse laughing stupor on my second time seeing it this weekend.

The musical tells the story of the not-so mysterious climb of Monty Navarro through the line of succession of a rather inhospitable family, the D’Ysquiths. Monty, after his mother’s death, finds that she was a member of the reputable family and schemes to claim the title of Earl of Highhurst (head of the D’Ysquith family), despite the long line of eight inheritors before him.

One incredible actor, Jefferson Mays, plays all eight members of the aristocratic, neurotic family. Regardless whether the character is a man or a woman, Mays will jump into each character’s costume off-stage with unimaginable speed. Sure, he does little to change his voice with each character he takes on, but that’s what’s part of the fun of the whole thing. Mays steals the spotlight of every scene he’s in and it’s near impossible to imagine how he obtains the energy he emits throughout the performance six or seven times a week, every week.

Unfortunately, Mays lost the Leading Actor in a Musical Award at the 68th annual Tony Awards to Neil Patrick Harris for his performance in Hedwig and the Angry Inch. While A Gentleman’s Guide took home Best Musical, Mays is almost entirely responsible for the show’s success. Seeing the show for a second time, I noticed many of the other featured roles in the show were recast, but Mays understandably stayed behind to shine as the show’s leading man. It’s absurd to imagine anyone else taking on the role and it will be a sad day for A Gentleman’s Guide when Mays finally hangs up his top hat and fake breasts.

If Mays’ performance isn’t captivating enough, A Gentleman’s Guide’s aesthetic is one of the most intriguing and bedazzling found on Broadway. From the halls and dining room of the D’Ysquith residence to the degraded streets of industrious London, A Gentleman’s Guide’s color palette is unique, vibrant, and varied. For having to change wardrobes within two or three minutes, each of Mays’ costumes are fabulously detailed and extravagant. While none of the actors have to go through such quick and impressive transformations, the cast’s apparel pops off the stage in each scene.

The show’s lyricism is also fantastic and notable among Broadway’s best. There is an irresistibly catchy flow to almost every song and the brilliant amount of wordplay and double entendres in almost every line persuaded me to pick up the soundtrack. Every once and a while a musical might have a really great song that I would feel compelled to get for my library, but with A Gentleman’s Guide I couldn’t resist downloading every song featured in the show.

Few shows on Broadway are as captivating as A Gentleman’s Guide to Love and Murder. From the instant you walk in the Walter Kerr Theatre, the gargantuan set piece that frames the production sets the tone for the hilarity and extravagance that ensue. Jefferson Mays could turn the show into a one-man showcase of his characters and it would still be entirely worth going to. He is the essence of the entire production, giving the impression that the show was either written for him or that the production has the most excellent casting-crew of all time.

It’s near impossible to find the time to get down to New York, but make the effort to see A Gentleman’s Guide to Love and Murder if you’re ever in town. It’s the best Broadway has to offer.

a fuller picture theater a gentleman's guide to love and murder
Fiore-Chettiar Recognized As A Strong Voice In The AHANA Community
Rihanna’s ‘BBHMM,’ Tame Impala, St. Vincent, And More Singles This Week