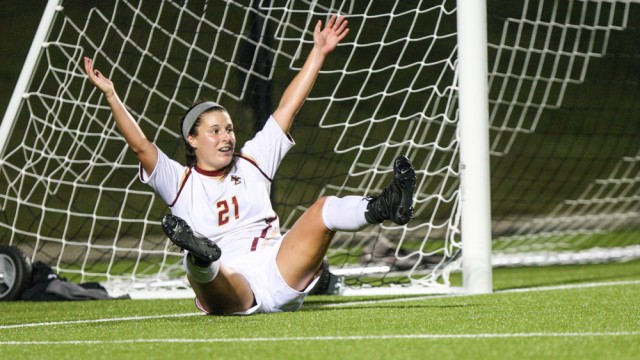 Meehan Breaks BC Career Goals Record In Win Over Pitt

On a cool October night in Western Pennsylvania, Boston College women’s soccer pulled out a 2-1 victory against the Pittsburgh Panthers. The game, which had ACC standing implications, saw BC junior McKenzie Meehan become the school’s all-time career goal scorer.

The winner of the game would be ahead in the ACC standings, and the aggressive play reflected that. The Eagles struck first, scoring in the 13th minute to take an early lead. Redshirt freshman Shea Newman sent a long ball into the box and Meehan headed it into the goal, beating Pitt goalkeeper Taylor Francis. Newman’s assist is the first of her collegiate career. Meehan’s goal, her 11th on the season, is the 40th of her BC career—a new school record.

BC couldn’t hold on to the lead for long, however. In the 27th minute, Pitt equalized the score after getting a shot past Alexis Bryant. The shot, taken by Jarena Harmon, came from fewer than eight yards away from the goal line. The assist was credited to Roosa Arvas.

With the score still tied, play was tough and competitive for the last few minutes of the first half. With 13 minutes left, Pitt found the back of the net, but it was called off on a foul, keeping the score tied at 1-1 going into halftime. At halftime, Pitt had outshot BC 12-2.

After over 20 minutes of scoreless play to start the second half, Hayley Dowd scored the go-ahead goal on Francis in the 67th minute. Her left-footed strike, 18 yards out from the goal line, rocketed into the upper-90 on the left side of the net, giving BC a 2-1 lead.

With just over 20 minutes remaining in the game, Pitt’s urgency was clear. As the Panthers pushed forward, trying to score an equalizer, they grew sloppy in the midfield. Turnovers allowed BC to control possession and pick up more scoring opportunities for the Eagles toward the end of the game. Several of Meehan’s shots were deflected due to excellent defending from Pitt’s Niki Hopkins, a transfer from Ohio State. Francis also had a diving save to deflect a screamer from Meehan with just under nine minutes to go.

Despite Pitt’s best efforts,the team could not capitalize on scoring chances. Hopkins’s free kick off a BC foul with three minutes left led to an opportunity for Lauren Pietrangelo, but her shot went just wide of the near post, preserving BC’s lead.

As the game winded down, the Eagles employed time-wasting tactics to their advantage. The referees judged that Lauren Bernard took it too far on a hesitation, however, showing her a yellow card for delay in the final minutes of the game. It did not lead to anything for Pitt, closing out BC’s eighth win against Pittsburgh with no losses.
The Eagles leapfrogged the Panthers in the ACC standings as a result of their victory. They improved to 3-1-1 in conference play. Although the Eagles had fewer total shots than Pitt, they made theirs count.