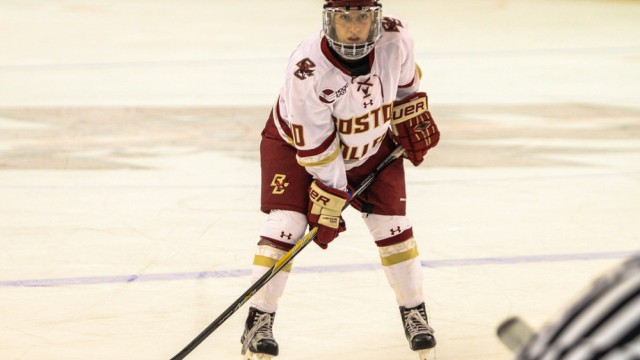 Eagles Demolish Terriers In First Battle For Comm Ave Of 2015

In football, getting eight points would be considered a low-scoring game. In hockey, getting eight points would be considered a high scoring game. In the first game in the home-and-home series against Boston University (6-5-0), Boston College women’s hockey (11-0-0) put the same number on the scoreboard as the football team lost to North Carolina State. This 8-1 win came in part from BC’s solid power plays and penalty kills, and to freshman Makenna Newkirk’s hat trick in the third period.

For the majority of the first period, the Eagles tried to come back from a one-goal deficit. This goal by the Terriers, the only BU power play goal of the game, started with Jordan Juron taking a shot on BC goalie Katie Burt during a BU power play. This shot looked as if it were stopped by Burt, but the puck trickled past her along the crease for Sammy Davis’ taking, allowing Davis to tap the puck into the net 6:03 into the period.

The Eagles almost went down 2-0 when a shot from the Terriers was tipped off the glove of Burt, and skidded just past the goalpost. Despite the Terriers aggressively pushing to the net, Burt was not discouraged by the first goal and responded to the offensive pressure.

BC pushed back by trying to get shots close in on BU’s net. With 3:02 left in the period, Kali Flanagan skated right down the middle of the ice towards the BU net, sending the puck past goalie Erin O’Neil’s glove. Less than two minutes later, Trivigno sent a pass from the right dot to Lexi Bender on the left, who sent a shot to the back of the BU net, putting the Eagles up 2-1.

The Eagles continued their offensive pressure in the second period by actively pursuing the puck and looking for shots on net, but their efforts were not answered until late in the period. Tori Sullivan sent a pass to Andie Anastos in front of the net, and Anastos directed it into the goal, causing O’Neil to sprawl in attempt to save the puck. Later in the period, a tripping call caused BC to go on the penalty kill. Thanks to the efforts of the penalty-killing crew, the puck was brought into the Terriers’ zone, and Haley Skarupa brought it close to the BU net to notch a goal, putting the Eagles up by two goals as the countdown clock ticked to 19:59. Skarupa’s goal was the turning point in the game that was soon to have a seven-point difference.

Not only did Skarupa score a shorthanded goal, but Alex Carpenter did, too. Still on the penalty kill from the second period into the third, Carpenter sent a shot from close to the net off the post past O’Neil. Throughout the period, the Terriers eased off the pressure they put on Burt. A penalty on Connor Galway added to the Terriers’ demise, allowing Newkirk to score her first of three goals in the game. O’Neil continued to be bombarded with shots from the still-invigorated BC offense, leading to Newkirk sending the puck from the middle to the back of the Terriers’ net once again.

BU tried to get some new momentum in the third, but was no match for BC’s superior play. With 3:14 left in the third, Newkirk completed her hat trick by defeating O’Neil and bringing the final score to 8-1. “She’s a great hockey player and she was able to find the net,” head coach Katie Crowley said. “She stayed strong on her stick and found a way to put it in.”

Crowley was also impressed by the extent to which the Eagles pushed to the net and worked for the puck, especially on the penalty kill and power play. “We talked about trying to get to rebounds, get in front of that net, get some of those gritty goals,” she said. “For us to carry that momentum [from Skarupa’s goal] over into the third period I thought that was great, I really was happy with the way our kids played.”

Crowley acknowledged that every game starts at 0-0, but said that hopefully the Eagles could bring the momentum from this win to their game at home against BU on Tuesday.