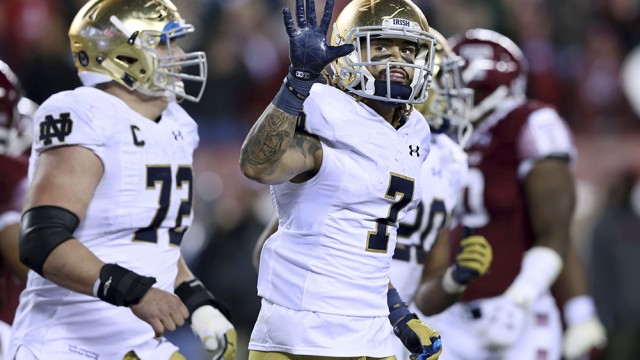 Breaking Down The Holy War Hype

I won’t say that things are heating up, because nothing is hot about this Boston College team right now. Nonetheless, the hype is starting to build for the big matchup with Notre Dame this Saturday.

But wait, it’s a Notre Dame home game. Fenway Park is already plastered in green and gold, and the stands will only have a small section of BC fans. Brian Kelly is the big bully, coming into Addazio’s own backyard and triumphantly sticking his flag in the ground. The whole thing adds a little insult to injury for Eagles fans, who have suffered through enough this year and now don’t even get to call this game their own.

A small debate is popping up regarding this point. Notre Dame gets to be the home team? In the city of Boston?!?! They don’t even get one endzone that says “Boston College”!! What a joke BC is.

Well, better that BC is the opponent than UConn or UMass.

That doesn’t make sense, though. Why would Notre Dame ever want to schedule UConn or UMass? Everyone in their right mind sees the rivalry and the marketing gold mine that comes with the BC-ND matchup. IT’S THE FREAKING HOLY WAR! Doug Flutie is running around some random dock in full pads, rocking the Under Armour throwback jersey and throwing deep passes. If that doesn’t get you all kinds of fired up, then go back to bed.

Fans just have to live with the fact that until BC gets back to the Flutie or Matty Ice glory days of yesteryear, Notre Dame can do these kinds of things and the Eagles won’t get their name sprayed onto the Fenway turf.

Fear not, though. BC gets the iconic Prudential Center, which will light up in maroon and gold on Saturday. Put a point on the board for the little guys.

All of a sudden we are talking about points on the board. You know what that means, it’s HOLY WAR HYPE SCOREBOARD time!!!

BC hasn’t done a lot of winning this year. Sept. 26—that’s almost two months come game time—was the last time the Eagles got a W in anything football-wise. On paper, BC doesn’t have chance to end that streak on Saturday. We can hope that the players are fired up and will play with a chip on their shoulder, which they should do, but talent is talent and Notre Dame has much more. So for now the only thing that matters is winning the hype battle.

Notre Dame gets Fenway, but BC gets the Pru for the whole day. The two team are even on historic landmarks.

Next up, uniforms. These are some beauties. Notre Dame is going with the Green Monster approach. The players will be decked out in green unis, while the helmet will still be bright gold. It’s bold, and its plays well with the Fenway color scheme, but it doesn’t hold up to the BC throwbacks.

The old BC logo makes it alone, and we can all agree that this logo is far better than the current one. With the dulled out maroon and gold giving it a real authentic old-school look, these can’t be beat. You just can’t beat retro. Flutie magic is in the air, and hopefully in these uniforms.

Next, the ACC Digital network is getting in on the action, making a promo video for the two schools.

Surprisingly, the video actually favors the Eagles. In terms of exact seconds, the Eagles actually get slightly more airtime as the video goes back and forth between highlights of the two teams. The BC highlights are mostly of the front seven getting sacks and tackles for a loss, and the secondary gets some love too. The BC offense clocks in with a whopping three offensive highlights in the video, compared to 10 defensive. We get Jonathan Hilliman and Charlie Callinan scoring against NIU and a one-second shot of Tyler Rouse doing a shake and bake.

Notre Dame’s highlights are all from the offense, so they get the edge there despite getting less time on screen.

The deciding factor in this video is the Steve Addazio voiceover throughout the video, which at times cuts to the actual video of his locker room speech in the week leading up the Florida State game.

The first line in the video goes, “You’ll bear fruit, if you do what’s necessary to bear fruit.” It’s an A+ line. He’s talking about a bunch of guys hitting each other on a field for 60 minutes, and using phrases like “bearing fruit.” It’s golden, and for that, BC wins this video.

That’s it. That’s your final score. Right now, BC is holier than Notre Dame, by a score of 3-1.

Does this all really matter though? Yes, and I don’t care what you think. I can dish out all the imaginary points I want.