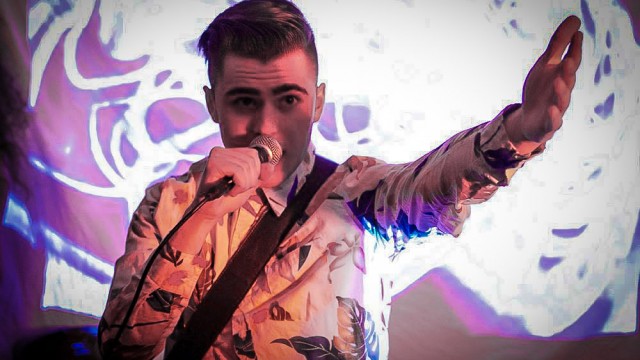 William Bolton, CSOM ’16, who wore flip-up, John Lennon-esque glasses and a maroon suede jacket to the Stokes Chocolate Bar, is part-businessman, part-artist. The new age soul singer from Detroit has been making and performing music for the last several years—sometimes with acts like Hoodie Allen and Shwayze, other times for friends around campus and in Boston.

Bolton is preparing to perform at the Firefly Music Festival in Dover, Del., this June, alongside acts such as Tame Impala, Ellie Goulding, and The 1975. Bolton will take the stage with his drummer, Victor “Vicky Stix” Araromi, MCAS ’17. The two have been working together for over a year. Bolton produces beats, writes lyrics, and sings, while Araromi plays the drums.

“I produce like 90 percent of the music,” Bolton said.

Bolton said his style lies somewhere between Tame Impala and Kanye West‚ two artists who Bolton said are similar to him, especially “within the groove of the drums and the chord progressions,” he said.

“My agent, he’s booking me these little shows—and Firefly, which is huge—but the main thing he’s doing is trying to get me on tour.”

Bolton said he uses his CSOM degree to his advantage—he has managed his music and personal brand like a businessman might manage a startup. He boasts 1.5 million SoundCloud views.

“I built an independent fan base,” he said, explaining that his connections to key players in the music industry were essential to landing the Firefly gig.

Bolton found his current agent, Lawrence Lam, at the New York City-based Paradigm Talent Agency, which also books Tame Impala and MisterWives. Bolton said that he had a mutual friend who runs a record label who introduced him to the agents at Paradigm. Bolton said that Lam didn’t even ask him before booking the music festival.

The news was a genuine surprise for both Bolton and Araromi, who didn’t know that they were scheduled to perform at the festival until the lineup was released. One morning, Araromi woke up to a text message from a friend.

“One of my bros from home said, ‘Congrats on Firefly,’” Araromi said.

The drummer, shocked to hear the news, woke Bolton to tell him that his name was listed on the Firefly lineup. Bolton couldn’t believe it.

Bolton finally got the confirmation from Lam, who’d hoped to surprise him, and was thrilled.

Bolton has been given very few details about the Firefly performance, but he said he and Araromi are working to perfect their act before they head to Delaware this June.

“The most important thing is going to be deciding what we play, and then the set up,” said Bolton.
The singer, whose stage presence is “a combination of soul singer and rock star,” said he plans to perform the songs “Summer Breeze,” “Fading,” and “a crazy song that’s not released yet” called “Fly,” at the festival.

Bolton said he and Araromi are looking forward to Firefly, but their ultimate goal is scheduling a tour.

“My agent, he’s booking me these little shows—and Firefly, which is huge—but the main thing he’s doing is trying to get me on tour,” Bolton said.

william bolton
Back On Track: The Reconstruction Of The MBTA
Innovating The Student Body: Entrepreneurship In The Morrissey College