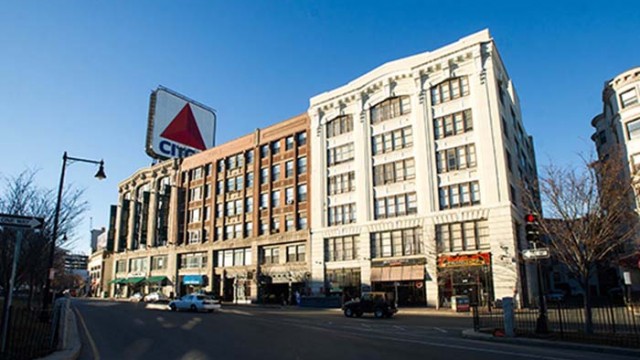 Boston’s famous Citgo sign, a critical part of the Boston skyline and backdrop of Fenway Park since 1965, will need to find a new landlord.

Boston University officials announced last week that they are putting nine buildings on the north side of Kenmore Square up for sale, including the building that has had the famous Citgo sign on its roof for the last 61 years.

The university contacted several real estate agencies to help with the sale, but chose Boston brokerage firm Newmark Grubb Knight Frank’s proposal to sell the buildings, for which the profits will be used to benefit the university and its students.

According to BU’s executive director of media relations Colin Riley, the school is marketing the property for the benefit of the mission of the school. He says that all buildings for sale have a lot of square footage and are in great condition.

“We’ve improved Kenmore Square tremendously, and hopefully [the sale] will help with the improvement,” he said. The school’s website says they will promote improving Kenmore Square as an even more vibrant part of the community as a guiding principle when considering all options available to them. Removing the Citgo sign does not make sense, Riley said, as it is one of the unique attributes of the property.

The decision to sell the nine buildings, located on Commonwealth Avenue, Beacon Street, and Deerfield Street, ultimately occurred so the university could use the money for more academic purposes. According to BU Today, the sale of Kenmore Square properties is but a strategic move to encourage development in Kenmore square. The university believes the sale of these buildings will be a great opportunity to raise capital funds, which will be invested in its core mission of education, research, and student services.

The sign, one of the most recognizable features of the Boston skyline, can be seen from many places throughout the city including the Charles River, the Boston Marathon route, and inside Fenway Park.

Boston College student and Red Sox fan Mary Lodigiani, MCAS ’18, who has seen the sign at many baseball games both on television and at Fenway Park, would be sad to see it go.

“For many Red Sox fans, the Citgo sign is nostalgic,” she said, “To see the sign go would be a loss.” She hopes that if the new owners are unable to keep the sign at its current spot, they will be able to display it somewhere inside the baseball stadium.

According to The Boston Globe, the sign itself is not for sale, as it is owned by a company that leases air rights atop 660 Beacon Street. University representatives believe that any changes to the sign seem unlikely, although it would ultimately be up to the building’s new owner. BU hopes to keep a voice in the building development, although any large-scale construction would have to be approved by the Boston Redevelopment Authority.

Despite the history of the sign in Boston, it is not a protected city landmark, and therefore, is not immune to being taken down. Though BU representatives believe it will not be removed, there are no terms about that in the sale, according to The Boston Globe.

In recent years, Kenmore Square has seen great improvements to many of its buildings, including an updated T stop, new restaurants, and the Hotel Commonwealth, which was owned by BU until they sold it three years ago, according to Riley. Yet the north side, home to BU’s Barnes and Noble campus bookstore, Bertucci’s Restaurant, Cornwall’s Pub, and several other tenants, remains unimproved. The university would like to sell the property to someone who could finish improving the facade of the square, giving the school the opportunity to focus on bettering its students.

The school’s Vice President for Government and Community Affairs Robert Donahue told BU Today that any developments would have to be approved by the city and the Kenmore Square community.

“The University will work in partnership with the developers and the community,” he said. “We have a long history of cooperation with our Kenmore Square neighbors.