With Valentine’s Day around the corner, love was in the air at Boston College—or was it? Professor Kerry Cronin, associate director of the Lonergan Institute and a philosophy department fellow, claims that BC students are uneasy when it comes to dating and often fall into the prevalent “hookup culture.”

On Thursday, Feb. 11, Cronin hosted a talk called “Save the Date,” in which she explained the 10 rules of hooking up and discussed how to go on a proper first date.

Cronin began the talk by explaining how student culture changes from day to night.

“During the day, you are the nicest, loveliest people,” she said. “I always say this about BC students. You hold doors for people at like a quarter of a mile away. But at night, it’s something different. I realized years ago that there’s this weird kind of separation of the daytime culture and the nighttime culture.”

Cronin realized this disparity years ago when talking to a few of her senior students. She asked them how they were going to manage their relationships after graduation.

“They look at me. They stare at me. Nothing,” she said.

The students explained how dating is complicated, and it is much easier to hook up. Although she had heard this before, Cronin was not aware of how prevalent the hookup culture was at BC. She was extremely surprised that out of the eight students, only one had been on a true first date.

“First dates are reconnaissance work only. This is not a 2 a.m. walk around the ‘Res.’”

She soon realized that there are three types of  people in different relationships at BC.

“Number one, lots of people are involved in ‘pseudo-married couples,’” she said.

Cronin describes these people as roommates or friends who have a significant other. She said these couples can get ahead of themselves and become serious too quickly.

The second type of people are people who opt out of any form of relationships. These people use the excuse that they are too busy or cannot find the right person to date. Cronin, however, believes that there is always time for dating, and among the thousands of students at BC, there are many dating possibilities.

The third type of people are involved in the hookup culture. Cronin believes this is a majority of BC students. She then outlined the 10 main rules for hooking up, poking fun at what she views as a problematic social script.

“If you’re going to participate you must follow these 10 rules,” she said.

The first rule is to avoid being awkward.

She explained that young people are inherently terrified of social awkwardness. They go as far as distancing themselves from certain people in order to avoid a potentially awkward situation.

The second and third rules are to go out and to drink.

The next set of rules relates to the hookup itself. Cronin said while hooking up, it is important not to talk about it, not to ask strange questions, and to know where your belongings are, in case you need to make a speedy escape and avoid an awkward situation. She also explained to students that staying overnight is the wrong move, as the next morning will be extremely uncomfortable.

The last set of rules relates to the aftermath of the hookup. Cronin criticized the belief that students should tell the story of the hookup to their friends because it is a great ego boost and it helps improve social status.

Cronin believes that students are not fully satisfied with the hookup culture and want to seek more, but they are too nervous to ask others on dates.

“Isn’t it strange that the most formal, high-pressure thing is asking someone out for a cup of coffee?” she said.

This anomaly prompted Cronin to create the infamous “dating assignment” for her students. As a final project for a junior and senior seminar she taught, students were required to take another student on a date. She told students if they did not complete this assignment, they would not pass the class.

Cronin outlined specific rules for the date. First, the student must ask the other student out in person, not over text message. The date must last 60 to 90 minutes, and it must take place somewhere off campus, where walking with your date is required.

“First dates are reconnaissance work only,” she said. “This is not a 2 a.m. walk around the ‘Res.’”

Cronin believes that the point of a first date is for students and their dates to be themselves. Only then can a true relationship begin to form.

“The date should end in an A-frame hug: shoulders in, all genitalia out,” she said. 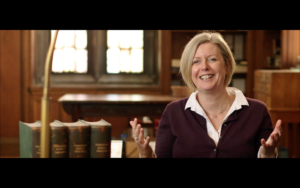