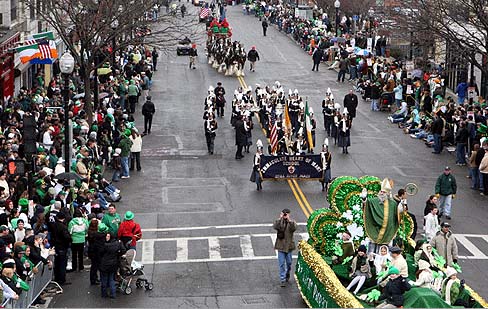 The organizers of the parade filed a lawsuit on Monday against the City of Boston, claiming that the truncated parade route stood in violation of their First Amendment rights to peacefully assemble. The Allied War Veterans Council of South Boston had requested a temporary restraining order that would require the city to approve their permit for a longer parade along the route it had traditionally travelled, according to The Boston Globe. Having met with parade organizers the previous Friday, Boston Mayor Martin J. Walsh, WCAS ’09, said in a statement he was surprised by the decision to go through with the lawsuit.

A federal judge ordered Tuesday that the St. Patrick’s Day parade in South Boston has a First Amendment right to march along its original route, according to The Boston Globe. U.S. District Judge Richard G. Stearns further added in the same article that the parade “does fall in a matter of constitutional protection,” and would be allowed to go along its original 3.2-mile route, rather than the shorter 1.4-mile route sought by the City of Boston earlier this month.

The annual South Boston St. Patrick’s Day parade is a longstanding tradition for denizens of the city. On Sunday, green decorations adorned houses of South Boston’s Irish population. But for many, excitement was tempered when Boston Police forces and the City’s mayor announced in a statement the plan for a shortened parade route, citing security as its primary justification.

The City announced the route last month, calling for the parade to begin on West Broadway at Dorchester Avenue, to follow West Broadway to East Broadway, and to end at Farragut Road. The precedent for this decision occurred last year when an unseasonably large amount of snowfall forced the city to shorten the route for the first time in the interest of public safety due to impassable streets. After the parade, Boston Police had apparently fielded half as many emergency calls relative to previous years. From a utilitarian standpoint, the truncated route needs 150 fewer police officers and will save the city more than $100,000, according to the Boston Police Department.

Among the affected by this news was the Allied War Veterans Council, the organization that sponsors the parade.

Desmond and the Allied War Veterans Council see the shortened parade route as a significant deviation from the more than 70 years of tradition. Parade organizer Timothy Duross said in an email that the City never consulted the South Boston Allied War Veterans Council on the shortened route and never gave a reason. He added that the shorter route misses several significant sites and that he is concerned spectators will be packed too tightly along the sidewalks, citing public safety to counter the city’s parallel claim.

Residents have had mixed responses to the shortened parade route. Patty Hallissey told The Boston Globe that she was “very disappointed with the shortened route again,” while some of her other neighbors did not seem to mind as much. The shorter route has not curbed Marcella Slinney’s excitement.

The parade will take place on Sunday, Mar. 20.

st patrick's day parade
How The Isabella Gardner Art Heist Reveals the Difference Between an Answer and a Solution
‘What Are Your Plans for St. Patrick’s Day?’