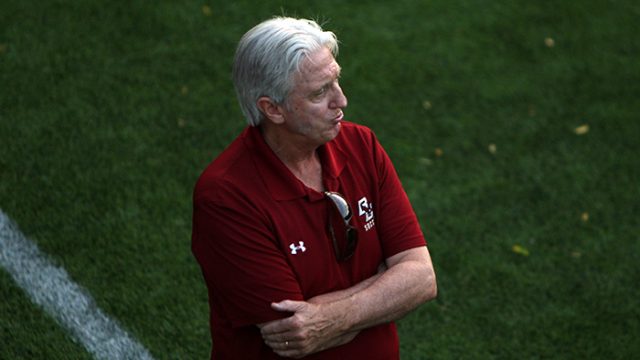 Last October, I wrote a column titled “Only A Matter Of Time Until BC Men’s Soccer Is Elite.” Ironically, I wrote it following a 5-0 drubbing at the hands of Wake Forest, then one of the best teams in the nation. The game served as a harsh reality check for the group of young talented Eagles, but it was evident that head coach Ed Kelly was on to something with the freshman group that he had brought in. I figured a few more strong recruiting classes and time for everyone to gain more experience and this team could start to replicate the sharp, sexy passing game at which the Demon Deacons excelled.

By any measure, that team arrived close to the elite label way quicker than I could have imagined.

Exactly a week later, the Eagles beat Virginia, before upsetting No. 10 Clemson in a thrilling 2-1 game. Flash forward a few months, and the Eagles could literally call themselves an elite team, as they made a magical NCAA tournament and reached their first Elite Eight since 2002.

I gave myself a nice, hearty pat on the back for my fortune-telling abilities, but I still wasn’t convinced. It was clear the Eagles were punching well above their weight. They had been dismantled by Clemson—the eventual NCAA runners-up—in the first round of the ACC tournament last year and still had a long way to go before climbing to the top of a stacked conference.

As this season rolled around, the question was clear: can the Eagles live up to a No. 11 billing in the preseason coaches poll and No. 8 ranking, per College Soccer News? Could another freshman class make a strong splash like the one before? Four games into this season, with the Eagles sitting at 3-1, is BC making huge strides? The answer is quite clear to head coach Ed Kelly.

“We’re miles ahead of where we were last year,” Kelly said following a win over Hofstra. “Tougher team, more experience, a lot more depth.”

A comparison between the Eagles’ first loss this year, against Villanova, and last year, against Loyola Marymount, reveals a huge difference in the two teams. BC fell flat against LMU, losing 1-0. The lone goal came off a long punt by LMU’s goalie that was misjudged and not properly cleared by the BC defense, allowing a forward to run onto the ball past the defensive line and score an easy goal. That game featured a makeshift backline featuring two freshmen in Derek Lyons and Rudolfo Postigos, and their early mistake gave LMU the advantage for the rest of the game. BC couldn’t even muster more than two shots on goal the whole game.

Fast forward to another 3-0 start followed by the first loss, and the Eagles look much improved. Like Postigos a year ago, freshman Fintan Devlin made his debut at center back, but Devlin settled in from the very beginning, putting in a strong performance and showing a knack for anticipation.

While there were obvious depth issues at this point last year, this first loss can be chalked up to some bad luck, and the Eagles can move on knowing they are well stocked with players across the field.

This starts with the man between the sticks. Cedric Saladin has shown he is capable of holding down the No. 1 spot at goalkeeper. The redshirt sophomore has had two years to learn under former starter Alex Kapp, and after sharing time with Kapp at points last season, Saladin is ready to command from the back.

In front of Saladin, the backline is quickly solidifying and showing consistency. Junior Mohammed Moro returns to his left-back position from last year and is the only player besides Saladin to play every minute thus far. Opposite Moro at right-back, Younes Boudadi is a major upgrade over a solid player in Derek Lyons, who has left the team after one year despite getting a lot of playing time last year. Hailing from one of the top clubs in Belgium, Boudadi looks ready to cover a lot of ground on the right side.

The depth and experience that Kelly has applauded is most apparent at center back. An injury to Len Zeugner—BC’s best player last year after Zeiko Lewis—and the graduation of Toby Ampadu—who became one of BC’s most valuable players down the stretch—has forced Ed Kelly to replace last year’s starting pair. Sophomore Joshua Forbes has slotted in to replace Ampadu, with the former midfielder showing comparable strength and speed. Junior transfer Tomas Gudmundsson—equal in size to Zeugner—has started the year next to Forbes, and his valuable experience at the D1 level with Coastal Carolina is very evident. The deep roster really proved itself when Gudmundsson, who is still getting up to speed, needed a day off against Villanova, and the aforementioned Devlin was able to step up and have a strong debut.

In the midfield, the depth has led to a high level of competition for playing time. Junior Henry Balf, who has been a starter since his freshman year, has been one of the most consistent performers over the past two years while controlling the tempo in the middle of the field. With the addition of freshman Lasse Lehmann, however, Balf has fallen down the pecking order. While not as consistent yet as Balf, Lehmann possesses much better skill with the ball at his feet and has been BC’s best freshman this year. Like on D, the depth in midfield has already proven its worth. BC now has the luxury to replace a starting freshman midfielder—Lehmann injured his ankle in the third game of the year—with an experienced veteran in Balf who is hungry for playing time.

Also in the midfield, freshman Callum Johnson is starting to step up big time. Playing both centrally and outside, Johnson has won the role of free-kick and corner taker, and now leads the team with three assists as a result. With an eye for the one-touch pass, Johnson has shown great vision and technical passing ability with lots of potential.

With a year under his belt, sophomore Raphael Salama has also really stepped up as one of the holding midfielders, jumping ahead of classmate Abe Bibas, who had been previously ahead of him on the pecking order.

Up top, experience and depth come together in the form of Maximilian Schulze-Geisthovel. After having been the main striker for Division II Saint Leo University, Schulze-Geisthovel was brought in to back up Simon Enstrom and has exceeded expectations thus far. He is more than just fresh legs when Enstrom needs a break, he is the Eagles’ leading goalscorer, and Kelly cannot remember the last guy to score four goals in his first four games. The emergence of the big German takes some burden off of the hard-working Enstrom, who can now afford a rest.

With all these names comes the ability to mix it up and tinker with the lineup. Senior captain Zeiko Lewis, by far the best player on the roster, can play centrally or move out wide, with either Johnson or even Enstrom replacing him the middle. Simon and Max could potentially play in the same lineup, while wingers Trevor Davock and Ike Normesinu can also play forward. Even at the back, you could potentially pair two roughly 6-foot-4, 200 pounders in Zeugner and Gudmundsson. There are a lot of mouth-watering possibilities all over the pitch.

Last year, 15 out of 25 players on the team were freshmen. When a team that is that young makes the Elite Eight, the future is bright. While the team had some up-and-down performances, when they were up, they were a force. Now a solid class of nine freshman joins that exceptional core of 10 sophomores, along with two strong, experienced groups of five juniors and four seniors, to make up an balanced and even roster.

With conference play kicking off against Duke on Saturday, this new depth and experience is going to come in handy as the Eagles look to cement themselves among the top dogs of the ACC. The time is now for BC to creep into elite company.