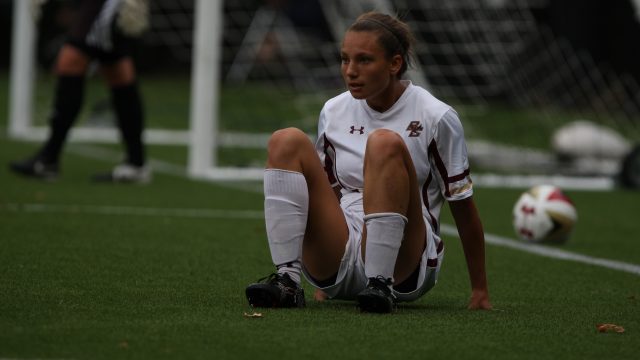 Twenty seconds into the second period of overtime, Kaela Dickerman of Louisville maneuvered her way through the entire BC defense and scored the game-winning goal. Many of the Eagles reacted by dropping to their knees, astonished by the turnout—a tough, abrupt ending to a contest that they should have won.

Soccer is a long endurance game, and Boston College women’s soccer (9-2-1, 1-2 Atlantic Coast) experienced this firsthand on Sunday afternoon. Despite controlling the contest, and holding a 2-0 lead into the 74th minute, the Eagles failed to prevail against the Louisville Cardinals (7-2-2, 2-0-1), falling 3-2 in overtime on a 90-degree sunny afternoon in Louisville, KY.

The first half was dominated by the Eagles, as their high-powered offense pressed into Louisville territory constantly. BC’s bread and butter involved playing the ball from the midfield down the line into the corners, where it would look to serve up a cross into the 18-yard box. Often these plays would result in corner kicks, which enabled the Eagles’ first goal.

In the 26th minute, Olivia Vaughn effortlessly buried home a beautiful ball that was volleyed to her by teammate Jade Ruiters, off of an outstanding corner kick that Samantha Hiatt served to the far side of the 18-yard box. This was the only time that the Eagles were able to turn a corner kick into a goal, but their strategy of serving up long corners and winning the first and second 50-50 chance provided them with many good opportunities throughout the game.

It did not take long for the Eagles to see the ball go into the back of the net again. In the 33rd minute, BC’s McKenzie Meehan was given a great through ball that she finished past the diving goalie. The goal was called back due to a controversial offside call. But later, in the 38th minute, Vaughn delivered again. From just outside of the 18-yard box, she placed the ball perfectly in the top right corner, giving Louisville goaltender, Taylor Bucklin, no chance to make a play. The Eagles entered the half leading 2-0, and showing no sign of letting up.

As the contest resumed for the second period, the Eagles continued to play in an upbeat and aggressive manner. The only problem with playing like this is that it can leave you vulnerable to the counter attack. In the 74th minute, a turnover by the Eagles in the middle of the field gave the Cardinals the ball and an opportunity to score. Louisville forward Jill Vetere drew a foul on the play inside of the 18-yard box, and proceeded to convert the penalty kick, making it a 2-1 game. This goal gave the Cardinals an energy boost that they used to gain momentum down the stretch.

In the 79th minute, Louisville’s Shelby Cohen looked like she was about to score, before BC goalie Alexis Bryant made an outstanding save. In spite of this tremendous play by BC, the momentum had quite clearly shifted at the most important moment of the game. Finally, in the 89th minute, Katrine Bjerke tied the game up for the Cardinals 2-2 with a header off a long throw in, resulting in overtime. The excitement and energy of this wild ending to regulation time was too much for the Eagles to overcome in the extra period. Louisville drilled the post on a wide-open chance in the first overtime period, before Dickerman sealed the Eagles’ fate 19 seconds into the second overtime half.

While in many ways the Eagles appeared to be the better team for the majority of the contest, they were unable to deliver down the stretch. ACC play provides a challenge with each game, and it is often difficult to come out victorious if you are not playing your best soccer at the end of the game. BC has done many things right so far this year, and the Eagles will look to move past the defeat as they head back home to face North Carolina State next Saturday.