Home » Gamboa on Immigration: ‘Walls Are Meant to be Torn Down’ 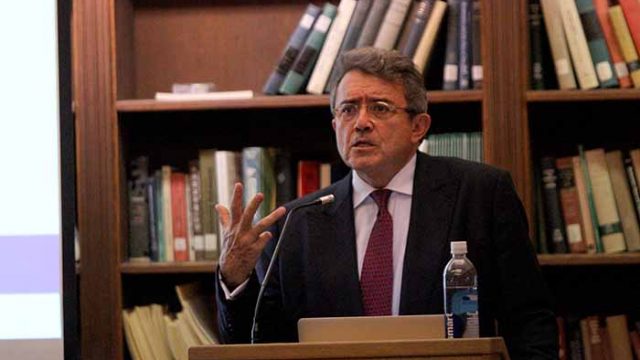 Gamboa on Immigration: ‘Walls Are Meant to be Torn Down’

During his talk Monday in the Fulton Honors Library, Emilio Rabasa Gamboa, general consul of Mexico in Boston, compared Republican nominee Donald Trump’s stances on immigration to the rhetoric of the Nazi Party during the 1930s and said that the upcoming United States presidential election would be the first to truly impact Mexicans.

Rabasa was presenting “U.S. and Mexico: Strong and Profitable Partnership,” a look at the historical interactions between the two countries and the importance today of their trade partnership. He started by talking about the Organization of American States (OAS), which has 34 member countries and is focused in part on tackling the unique set of problems that confront Latin America, particularly upholding human rights, establishing and maintaining democracy, combatting drug cartels and money laundering, and bridging the gap between rich and poor.

Moving on to Mexico specifically, Rabasa talked about today’s negative attitude in the U.S. toward his country. He sought to debunk a couple of myths. Conventional wisdom about Mexico, he said, is that it’s a developing country that suffers from serious crime and violence epidemics. He acknowledged that Mexico is in a very difficult situation, but he said that Mexico had created neither the supply nor the demand for the drugs that fuel its crime crisis—drugs like heroin come mostly from South America, and they are transported through Mexico by cartels to meet demand created by Americans. The drug trade brings weapons into the country along with it.

“It’s also true that Mexico isn’t only involved in that problem,” Rabasa said. “There’s a wider reality that I have to present to you.”

For example, despite assumptions about poverty in Mexico, at $1.2 trillion it’s the world’s 15th-largest economy, 10th-largest exporter, 9th-largest importer, and second-largest buyer of U.S. exports, behind only Canada. Trade with Mexico accounts for 142,557 jobs in Massachusetts alone through the computer and electronics industries.

To contextualize Mexico’s current relationship with the U.S., Rabasa walked through some history. He started with the Mexican-American War in 1848 and touched upon the American Civil War, in which Mexico played a crucial role in 1862 by preventing French troops from arming the Confederacy. Then he talked about a low point, the U.S.’s invasion and seven-month occupation of Veracruz in 1914, and a more positive turn in diplomatic relations, President Franklin Delano Roosevelt’s Good Neighbor Policy, a pledge in his first inaugural address to avoid U.S. involvement in Latin American affairs.

That policy was followed by decades of general silence, until 1994, when the North American Free Trade Agreement (Nafta) came into force. NAFTA is responsible for 14 million jobs in the U.S., 6 million of which are exclusively due to trade with Mexico. Critics of NAFTA argue that it has lost the U.S. shipping and manufacturing jobs and that it has forced some agricultural workers in Mexico to immigrate to the U.S. illegally.

Rabasa attacked the notion that illegal immigration is as big an issue as some say, pointing out that in recent years net immigration to the United States from Mexico is actually negative, meaning that more people are leaving than coming in. He also praised the efforts of Mexican workers in the United States, like a community of 1,700 laborers he visited in Vermont who milk cows every day from 3 a.m. to 3 p.m.

“I wonder if those farmers could find American workers who would be willing to work from 3 o’clock in the morning to 3 in the afternoon … for something like 9 and a half dollars an hour,” he said. “What would happen if those 1,700 workers were deported? The dairy industry in Vermont would collapse.”

“We have to modernize NAFTA, of course, but suspending NAFTA or believing that NAFTA has made things worse for the United States—that’s not true,” he said.

After his talk, Rabasa was asked how he thinks Mexicans and Mexican-Americans can best prepare for the possibility that Trump wins the presidential election. Trump has made divisive comments on immigration and race throughout his campaign, infamously calling for an outright ban of Muslim immigrants and proposing the construction of a wall on the Mexico-U.S. border to be paid for, he says, by Mexico.

Rabasa said that this election has gotten more attention in Mexico than any before it, not only among the intellectual elite but in schools, factories, and households in general. It’s because of Trump’s rhetoric and the fear of what could happen if he is elected, with remittances—a common practice among Mexican immigrants of sending back home a portion of their paycheck—a particular concern because Trump has pledged to ban them, though Rabasa said he questions the government’s legal authority to do so.

“Walls haven’t been and will never be a solution,” he said. “Walls are meant to be torn down.”