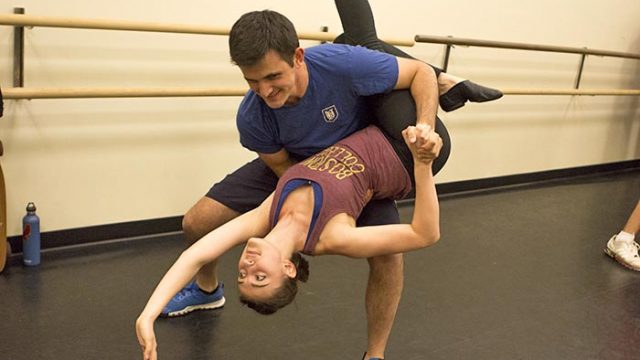 Walk into the Brighton Dance Studio on a Tuesday or Thursday night, and you’ll hear a cacophony of songs ringing throughout the building and its several separate practice rooms. In the main space, the first room you enter through the studio’s front doors, there are a few separate crews and performers stretching, practicing steps or even a full routine. Everyone looks serious, concentrating on whatever they’re trying to perfect or work through and, for the most part, they seem uninviting. Off in the back corner, on the other hand, either through a small, square locker room or a narrow corridor from the main room, you’ll come across 20 or so dancers laughing, tumbling around, and practicing intricate flip tosses. These dancers, practicing choreography for a few different performances throughout the year, make up just a small portion of Full Swing, Boston College’s one and only swing dance crew.

Full Swing hasn’t always been Full Swing. From 1998, the year the club was founded, until 2014, Full Swing was called Swing Kids, referencing the 1993 film starring Christian Bale. The club’s name was not the only thing that changed that year. Though a new e-board is elected every school year, today’s e-board members feel that 2014 was the year that Full Swing started to pull its act together with better leadership, more choreographed dances, and more marketing for events across campus. While membership for Full Swing has always been on the rise, the last few years have seen a dramatic increase in attendance at both the group’s weekly lessons and its socials.

Right now, Full Swing has over 200 general members. General members are people who are currently only taking lessons and attending the club’s socials. After attending a combination of five lessons or socials, you become an active member, which means that you are able to try out for Full Swing’s several choreographed dance routines that are performed at a variety of Full Swing and more general dance events throughout the year. There are currently over 50 active members of Full Swing.

Lessons are meant to introduce the basic technicalities of Full Swing’s particular type of dance to interested and amateur dancers. Full Swing members practice a type of swing dance called Lindy Hop, which, as opposed to, say, West Coast or East Coast swing, is a melding of several different dance types, such as the Charleston, breakaway, and tap dance. Though Full Swing relies heavily upon the traditional Lindy Hop, choreographers and teachers are not afraid to add other stylistic elements from ballet or hip-hop dance styles. Full Swing e-board members emphasize the accessibility of their lessons, harping on the fact that many members had no previous dance experience before starting Full Swing.

“There’s no expectation of you knowing how to dance,” said Dave Huffman, Full Swing’s treasurer and CSOM ’18. “You don’t really need any dancing background at all. The Macarena was the high point for me before I joined. Once you learn the basics, you can go to a social and then half the time, you’re not really making any mistakes, if you act confidently enough, you’ve just created a new move.”

These lessons are taught on Mondays and Tuesdays by veteran Full Swing members, whom the e-board is confident can show newcomers the ropes of Lindy Hop. There are also usually Full Swing active members at the lessons that are happy to work with people that start lessons later in the semester. The instructors work off of a syllabus each semester, starting with the very basics at the beginning of each semester and working through some more complicated motions and techniques as the semester goes on.

Aside from these lessons, another enticing aspect for newcomers to dancing and Full Swing is the group’s four socials, which are thrown throughout the course of the year. These socials present BC students with the chance to get dressed up and go out for a night of dancing and music with their friends. They’ve been thrown all across campus, from the Rat, to Eagle’s Nest, and, most recently, out on Stokes Lawn.

At the socials, one can really get a sense of the camaraderie that Full Swing members feel toward one another and how welcoming they are to interested students and the community as a whole. There aren’t many, or even any, other times on campus when you see an elderly guy get asked to dance by a college-aged woman. While that may sound a little strange, it’s actually quite touching to see. These socials prove that the swing style is alluring to people of all age groups and is accessible pretty much across the whole spectrum of dance ability.

While Full Swing is unique in having a social scene, seeing as the other dance groups on campus don’t hold social dances or open lessons for newcomers, there is also a competitive aspect to the group. Like most dance crews, Full Swing is vying for a spot in the annual ALC Showdown, a dance competition put on every spring by the AHANA Leadership Council. In the past two years, Full Swing has found itself in the Showcase category. Before that, the last time Full Swing appeared in Showdown was back in 2010, when the club was still known as Swing Kids. In the last two years, and especially this year, the group has put a heavy emphasis on building its Showdown routine and practicing it thoroughly.

“Our mixing wasn’t fantastic in 2015,” said Dante Keeler, one of Full Swing’s Showdown captains and MCAS ’17. “We didn’t have a cohesive theme. We just had three unconnected songs, and that didn’t work well with what the other groups had going. We spent last year getting acquainted again with how Showdown really works and we got a standing ovation at that show, so I think as long as we really work on it, we should do just fine this year.”

Besides its Showdown performance later this year, Full Swing has a number of performances and collaborations lined up for the rest of the school year. Throughout the year, Full Swing can be seen performing during Love Your Body Week and Week of Dance, as well as at the Sexual Chocolate Rookie Show and the SEASA and Conspiracy Theory Show. Full Swing will have its second solo show in Robsham this upcoming March. The group also hosts one of its socials with BC bOp!, BC’s only jazz ensemble, and it performs with bOp! during Arts Fest at the end of the year. Hopeful of obtaining a spot in the Competitive category at this year’s Showdown, Full Swing may be on its way to being one of the most prominent emblems of BC’s dance modern dance scene.

Breaking outside the bounds of campus and the student body, Full Swing has a few partnerships with swing dance groups on other Boston campuses as well as in the city itself. The group’s socials are marketed to the swing dance crews at MIT and Tufts, as well as to Boston Lindy Hop and Swing Central. Members of Full Swing enjoy venturing out into the city or onto other campuses to partake in swing dance events throughout the school year. Every summer, Full Swing members who are still in the New England area go down to New York for the annual Midsummer Night’s Swing event. The wide range of events that Full Swing members attend both on and off campus throughout the year highlight their love and enthusiasm for swing dancing and the communion that they share.

Many members of the e-board stress the easygoing nature of Full Swing and how much they enjoy the group dynamics at play in the different dances that they perform. While many aspects of other dance crews and types highlight individual talent, at all times, there is a partner dynamic at play in Full Swing’s routines.

Many members pointed to their partner dynamics as one of the most enjoyable and intriguing facets of being part of Full Swing. They feel that they have made some of their closest friends at BC through their time with Full Swing and that their dancing partner is someone they usually learn to trust holistically, not just in their dances together.

“It’s all about chemistry and partner connection,” said Naz Subah, Full Swing’s president and CSOM ’17. “If you’ve been dancing with someone for a really long time, you feel comfortable with him or her. My partner knows how to manage my body, and I know how to manage his. It takes a lot of trust to build a partnership and it shows in a performance.”

bc swing
“How Do You Procrastinate?”
Benefactors Attended a Gala to Close out Light the World Campaign