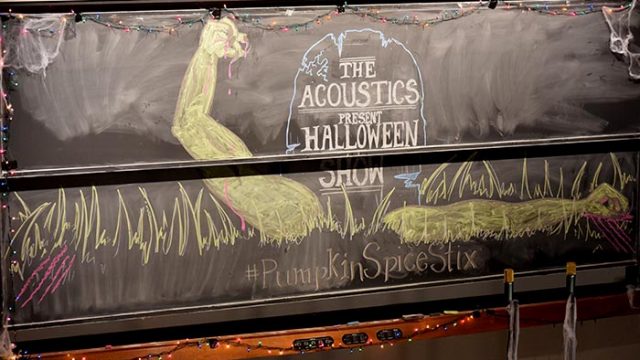 “Need a raccoon? Need a zipper? You call Bryan,” one of the members of the Acoustics shouted to a large audience.

Wait, what? If that doesn’t make any sense, don’t worry—it didn’t make a whole lot more sense to the Friday night audience of the Acoustics’ Halloween Invitational.

On Oct. 28, one of Boston College’s premier a cappella groups, the Acoustics, hosted its annual Halloween event, encompassing several facets of the BC arts scene. Blowing the doors off of Cushing 001, the Acoustics, the Dynamics, Fairfield University’s Bensonians, and BC improv group My Mother’s Fleabag put on one of the best shows of the year thus far.

Opening the doors shortly before 7 p.m., the Acoustics welcomed students in a variety of states—swathed in head-to-toe dress-up, a simple Superman shirt, or even no costumes at all. As it always does at a BC a capella concert, the air carried a sense of anticipation as every student, regardless of the state of his or her appearance, waited for the experience to begin. For the performers, looking out into the audience must have been the strangest of sights—the crowd was the perfect mixture of zombie, ghosts, ghouls, villains, supervillains, animals, and even some regular old human beings. And even in that unusual state, the lights went down at 7 p.m. on the dot.

Attending an a cappella performance, especially one hosted by some of the most talented performers that BC (and Fairfield) has to offer, is a fairly surreal experience. A person who has never heard a song performed in this style may be taken aback—it’s certainly not what one expects as the stage lights dim—but the outcome is truly extraordinary. The format is relatively basic: a group of around 10 or 15 people take the stage. One member steps up to the microphone, and as they sing, the rest of the group hums and harmonizes the music of the song for the leader to sing along to. Simple in theory, certainly, but beyond difficult in execution.

Even trying to pick a standout point in the night is next to impossible. The Acoustics and the Dynamics both have such an incredible ability to contain every ounce of attention that the audience has to give. The effect is mesmerising. And as much of a treat as every Acoustics/Dynamics collaboration is, Fairfield University’s Bensonians capitalized on the night just as much. Particularly impressive was its lead singer (the ability to throw one’s voice will forever be fascinating), but in all truthfulness, making that claim absolutely begs for the same to be given to every group. A good a cappella event is one of the most fun events a person can go to, and strong lead singers can make or break a group. With that in mind, the Acoustics, the Dynamics, and the Bensonians have absolutely nothing to worry about. Jamming along to the a cappella-ified version of Neon Trees’ “Everybody Talks” was one of the most fun times on campus this year.

Of course, no discussion on the Halloween Invitational would be complete without a shout out to My Mother’s Fleabag. The troupe, once again, never ceases to send a room spiraling into fits of laughter. Friday’s Halloween Invitational was no exception. Especially of note was its movie-making skit, in which four members of the club rattle random movie titles off the top of their heads, come up with hilarious taglines for them, and act out scenes if the ideas are solid enough. In terms of pure entertainment value, it’s hard to beat the saga of Raccoon-Zipper-Bryan, a man with a monopoly on both the raccoon industry and the zipper industry. The improv skit ended with the star raccoon giving his Oscar speech—“Today I say to my haters: zip it!”

If one were to listen carefully enough on a windy, fall afternoon, that person might just hear the sounds of an a cappella practice bellowing through the halls of any building on campus. It is not uncommon, in fact, to hear the voices of the Acoustics as they spend many hours a week perfecting their craft. The same, assuredly, can be said for the Dynamics, the Bensonians, and My Mother’s Fleabag as well. These teams of experts in their fields work tirelessly to bring BC the very best that they have to offer, and at last Friday’s Halloween Invitational, their long hours of effort most definitely showed through. Hard work breeds high rewards, and by the end of the night, no one should know this better than these four groups.