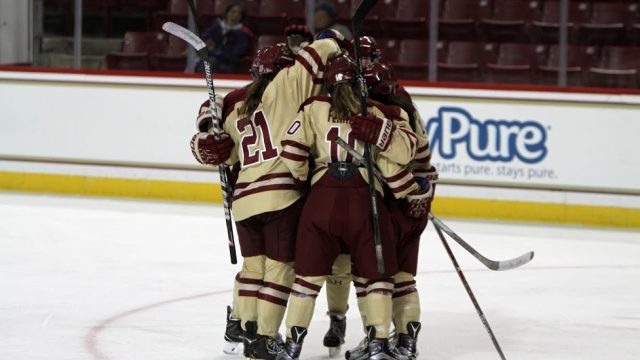 After a bit of a shaky start, Boston College women’s hockey has been on a tear lately. Even a great season, however, can be a bit of a step back coming off an undefeated regular season that brought the team to the National Final. Although they have not been the world-beaters they were last season, the No. 6 Eagles have continually proven themselves to be a dominant team. Their 8-0 win against Providence was no different.

The Eagles (11-3-3, 10-2-1 Hockey East) started strong, with junior Toni Ann Miano scoring the first goal less than 30 seconds into the game. The Friars (8-10-1, 4-6-1) tried to calm things down, managing to keep the chances back-and-forth early in the period. Then, the Eagles reclaimed momentum after the Friars took two penalties virtually back-to-back. BC created a lot of pressure during the first penalty, but was unable to convert. Only 33 seconds later, the Eagles returned to the power play as Kate Friesen was called for tripping. This time, they took advantage of the opportunity and Miano scored her second goal of the night to put BC up 2-0. This was Miano’s second two-goal game of her career—the other was also against Providence, last February. Miano now has 15 points in 16 games, making her Hockey East’s leader in points by a defenseman.

From there, BC controlled the pace of the game, as Providence goaltender Madison Myers fought to keep the Friars in it. The Eagles managed to top off a dominant first period with a goal in the last minute from Ryan Little, bringing the score to 3-0 after the first 20 minutes. The Eagles finished the period with 17 shots, their highest tally in a single period since the first period of their game last month against Boston University at Walter Brown Arena.

Rather than sit on their lead, the Eagles came out just as strong in the second period, taking control on offense for the first few minutes. BC risked losing momentum as it took two consecutive penalties, but it managed to shut down the Friars’ power play, allowing only one shot for the duration of both penalties. Less than a minute after the second penalty ended, BC was put on the power play and Erin Connolly scored quickly to further expand the Eagles’ lead. The Eagles added two more goals in the second period—one from Kali Flanagan and another power-play goal for Connolly—to take a commanding 6-0 lead heading into the third period.

Once again, the Eagles refused to let up, piling up shots against freshman netminder Clare Minnerath. She started the period—her first collegiate appearance—in relief of Myers after Myers conceded six goals. BC found a way to get the puck past her when Andie Anastos scored her eighth goal of the season a little more than halfway through the period.

BC then killed off another penalty, improving its overall success rate to 92.6 percent, the third-best in the NCAA. The Eagles finished the scoring with less than three minutes remaining in the game, as freshman Kate Annese scored the first goal of her NCAA career. Katie Burt finished with 17 saves to earn her third shutout of the season—and 29th of her career—in the dominant 8-0 win for BC. Anastos had three assists in the game, finishing with her first four-point game of the season. Makenna Newkirk also finished with four points, all assists, in the first four-point game of her career. The Eagles outshot the Friars in every period, with the final shot total 45-17 in favor of BC. The Friars were held to their lowest total in a game this season, and their leading scorer, Cassidy Carels, was held to only two shots with the Eagles as dominant on defense as they were on offense. BC’s commanding victory over its Hockey East foe bodes well as the Eagles look to replicate last season’s success prior to an extended Winter Break.