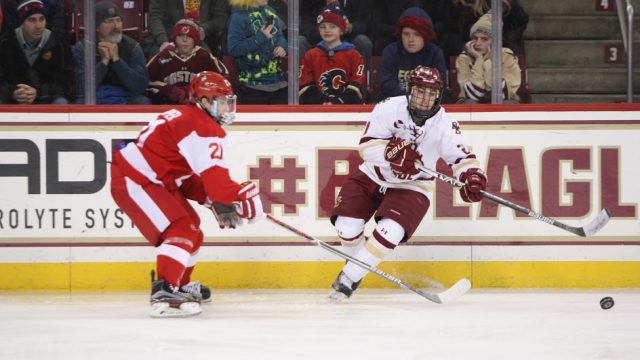 Boston University has a lot more NHL draft picks on its roster than Boston College does this year. Even if you didn’t know that, you probably could have figured it out on Monday night. BU was faster than BC, and maintained that aggressiveness while only taking three penalties the whole game.

“They’re solid on defense, so you’re not gonna get a lot [of chances],” head coach Jerry York said.

Without a lot of great chances at even strength, it was even more imperative that the Eagles took advantage of their power-play opportunities. They had one in each period, and each time it felt like that was BC’s chance to put its mark on the game.

In the first period, BC actually controlled much of the run of play. The Eagles’ doubled up the Terriers’ shot attempts in that stanza, but couldn’t seem to break through. Possibly their best chance to get one past Jake Oettinger was on their man-advantage at the end of the first, but star defenseman Casey Fitzgerald let the puck get out of the zone just as BC was creating some havoc.

BU converted its own power play in the second period, but BC had a chance to get it back when Terriers’ captain Doyle Somerby took his second penalty of the game about five minutes after Patrick Curry’s goal. This time, York sent out his other power-play unit first, which included Christopher Brown and Jesper Matilla. Surprisingly, Brown chased a lost faceoff behind BU’s net and bodied Nashville Predators 2016 first-round pick Dante Fabbro off the puck to gain possession, but that unit couldn’t do much after that. The usual first group, which has BC’s best weapons in the Fitzgerald brothers and Colin White, didn’t do much better by struggling to enter the zone and generally wasting the rest of the time that Somerby was in the box.

Several minutes into the third, the Eagles got their last chance on the man-advantage, but it was mostly highlighted by Matilla letting the puck bounce over his stick at the point and out of the zone. It’s hard to say that the power play failed on the night because BC only had three such looks, but everything’s heightened in a rivalry game, and it was more than the lack of goals that didn’t inspire confidence in BC’s power play. Like all coaches, York has been known to tinker with his power play’s positioning and personnel throughout a season, but his top players on the first unit just need to score. If they don’t, BC will probably be on the losing end of games against deeper teams like BU.

Besides not converting on the power play, another reason why the White and the Fitzgerald brothers were kept off the board is also the most glaring difference between the two teams that faced off at Conte Forum on Monday: defensemen. BC started three freshmen, and they all happened to be under six feet and 185 pounds. BU starts two freshmen defensemen, but Fabbro was a first-round pick, and the other one, Chad Krys, was a second-round pick (Chicago Blackhawks) in 2016, as well. All of BU’s top-six defensemen are NHL property, actually, and they’re all over six feet tall, too. Yet they still moved well enough to keep up with Ryan, the older Fitzgerald, as he was chased down from behind on a few occasions throughout the game. BC’s first line of Fitzgerald, White and Matty Gaudreau had some decent scoring opportunities, but they were usually rushed and the passes were always a little bit off. A big reason for that was the stout defense corps assembled by fourth-year BU head coach David Quinn, who has made up for his lack of experience with some major recruiting chops.