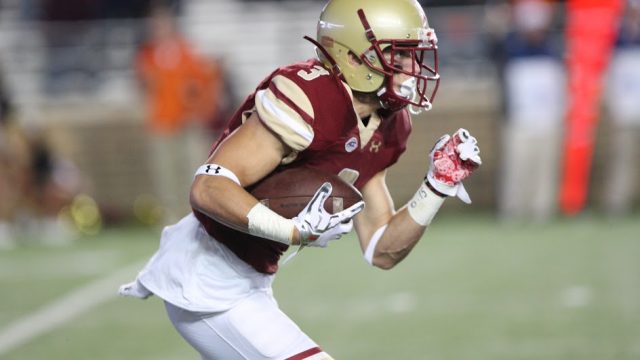 On Tuesday afternoon, the Atlantic Coast Conference released Boston College football’s finalized 2017 schedule. The Eagles will host six home games and will travel out-of-state to five away games. BC will also play one away game at Fenway Park against Connecticut.

The Eagles will travel to Dekalb, Ill. to take on Northern Illinois in the first week of the season, Friday, Sept. 1, before beginning their ACC and home slate in the second week of the season when they welcome Wake Forest to Alumni Stadium. BC will host non-conference opponents Notre Dame in Central Michigan in September, as well as take a trip to defending champion Clemson.

In October, BC will play conference foes Virginia Tech and Florida State at home, and will travel to Louisville and Virginia. The Cavaliers are the Eagles’ rotating Coastal Division opponent in 2017, similar to Georgia Tech last season.

The Eagles will open November on the bye week, before playing North Carolina State at home on Nov. 11. BC will then take on Connecticut at Fenway Park, before rounding out the season against Syracuse at the Carrier Dome on Thanksgiving weekend.

The Northern Illinois game will be played on a Friday, as will the home game against Florida State. It is the third consecutive year that the Eagles will play the Seminoles on a Friday night. All other games are scheduled for Saturdays.

Saturday, Sept. 9: Wake Forest at BC

Saturday, Sept. 30: Central Michigan at BC

Saturday, Oct. 7: Virginia Tech at BC

Saturday, Oct. 14: BC at Louisville

football 2017
CJBC Talks Trump, Encourages BC to Divest at Post-Inauguration Walkout
Martin O’Malley on Lessons From 2016 and Reforming American Democracy