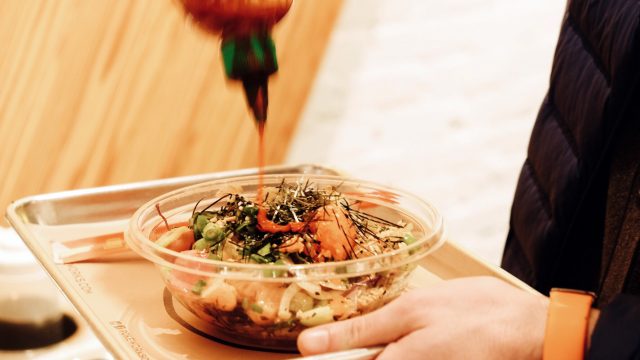 The secret’s out: poké (poh-kay)—the newest wave in fast, casual food—has finally hit the East Coast, and there’s no sign of it slowing down. Pokéworks is a Hawaiian-inspired, minimalistic eatery in Somerville, where guests choose from an array of protein—typically raw fish—to be topped over sticky rice, salad, or rolled in the form of a “sushirrito,” before being thoughtfully mixed with traditional sushi ingredients like pickled ginger and masago.

Situated in Somerville’s vibrant Davis Square, Pokéworks might be harder for Boston College students to get to than any place this side of the river. But if you’re in the mood to break out of the BC Bubble and taste something other than mac and cheese from the Rat, call your Uber and go. The neighborhood is fun to explore and your taste buds will thank you after.

The problem is you’ll probably want to go back for dinner, too.

Pokéworks general manager, Joshua Cast, an Orange County, Calif. native, has 20 years of managerial experience in high-pace restaurants. Even his “all go, no stop attitude” that was instilled in him by his father at a young age, was challenged this past weekend with the shop’s official grand opening. The line for Pokéworks’s BOGO poké bowl was maintained at an impressive two and a half hours—and Cast finally had to shut it down at 8:45 p.m. (the event was scheduled to run until 10 p.m.) so the team could make it home that night. At below-freezing, January temperatures, it defined a “food craze.”

Once you’re there, you’ll understand why. With the same designers as Shake Shack, Pokéworks gives off a familiar vibe, creating the aura that this new joint has been part of the neighborhood all along. Cast explained that the goal is for Pokéworks to become a household name on the East Coast, which, as the nation’s fastest-growing poké brand, seems is already a possibility. With local artwork and reclaimed wood from the Boston area, the chain is already becoming as embedded into the landscape as it is in Hawaii.

For co-founders Michael Wu, Kasper Hsu, Kevin Hsu, and Peter Yang—all California natives—importing the idea of a poké joint was the natural solution to post-vacation withdrawals.

“In Hawaii there are poké carts everywhere,” Cast said. “When you visit, you eat it everyday because everybody does.”

According to Cast, the Somerville Pokéworks location is particularly unique because it is the first franchised Pokéworks.

“Davis Square is up-and-coming,” Cast said. “While there has been a big mix of people, everyone seems to have the same mindset: they want to know where their food comes from.”

Cast attributes the increasing popularity of poké joints to a growing interest in sustainability, as many eaters are becoming increasingly focused on what they are actually putting into their body.

As for the menu, it’s relatively straightforward. $12 for a regular sized, and $15 for an extra serving of protein. Cast recommends the Signature Works for novice poké eaters—the 32 topping options might be overwhelming at first, but he is confident that this sort of diversity is a key differentiator for Pokéworks amongst other poké joints. From seaweed salad to crab salad, wasabi to jalapeno, and avocado to roasted macadamia nuts, there’s lots of room for experimentation. Cast’s personal favorite is the spicy ahi, with salmon instead of ahi.

Cast said that the poké has been led by customers who know what they want. At Pokéworks, not only will customers find what they are looking for—there’s even tofu for vegans and vegetarians—but the staff is also knowledgeable, smiley, and accommodating.

Whether it’s the Hawaiian Classic—a Signature Works creation of ahi tuna, scallions, seaweed, cucumber, chili flakes, sesame seeds, sesame oil, and the not-too-salty, not-too-sweet classic sauce—or poké your way, the complementary textures will be sure to excite your palate. Cast orders ingredients in six days a week, and the quality is obvious.

As if his cross-country move to Boston weren’t enough, Cast’s confidence in the brand shines even brighter when asked about the future of Pokéworks. Cast shares that there are plans to open two more New York stores in the next six months, and six to seven in the Boston area by the end of this year.

We can only cross our fingers and hope that among the numerous projected locations, a Chestnut Hill location might be in the works. 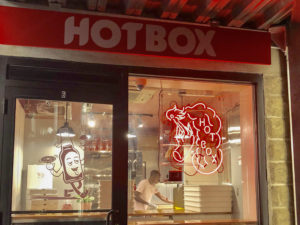