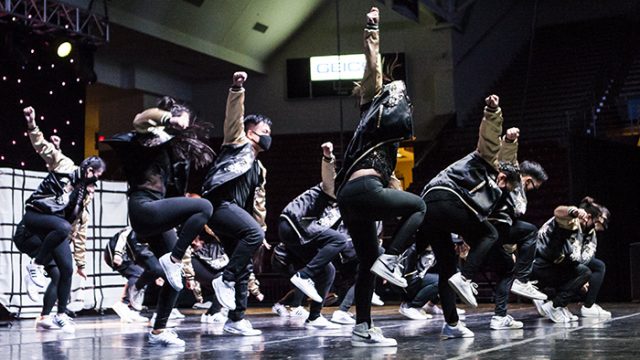 Aside from the dance-oriented aspects of the AHANA Leadership Council Showdown, the competition is a great opportunity for the larger Boston College community to see the displays of culture offered by the teams entered. Many students often miss out on the individual shows put on by these cultural groups and as such, Showdown gives the crowd a taste of the diversity at BC through dance.

The champion of Showdown’s cultural division was AerodynamiK (AeroK), a hip-hop team sponsored by the Korean Student Association of BC. The theme of the winning performance was cops and robbers. AeroK’s performance was one of the most modern dances featured at Showdown, using multiple contemporary American songs such as “El Chapo” by The Game & Skrillex and “Monster” by Kanye West ft. Nicki Minaj. The modernity of the songs resonated with the audience at Conte Forum, as the team was met with roaring applause and cheers from the crowd and even some of the other dance teams seated next to the stage.

AeroK’s group of over 20 dancers afforded the team the ability to put on impressive visuals, in which the entire stage is alive with coordinated movement. Often, while the entirety of the team was on stage, AeroK would divide its dance into thirds. Each third of the team had a different yet equally stunning routine. This allowed for the hip-hop group to present all of the capabilities possessed by its members in the six minutes allotted for the performance.

After a select number of AeroK performers accepted the first place award for the cultural category, they poured off the stage into the waiting arms and warm smiles of their teammates. AeroK, as a team, congregated in the rink, embracing one another as well as the supportive friends who had come to see them. Many members of the dance group ran around in excitement, their faces covered in wide smiles and tears of happiness. When asked about the feeling of first place, Joyce Chang, co-captain of AeroK and CSOM ’17, pridefully described the efforts of the team.

“This entire team, we’ve been putting in so many hours since the middle of February,” she said. “A lot of our team are first time dancers and it’s amazing to see how far they’ve come.”

Coming in second place in the cultural category was Presenting Africa to You (PATU). The all-girls team is BC’s African dance troupe. The overarching narrative of their performance at Showdown was that of Cleopatra and Julius Caesar. As the dancers, garbed in African clothing, mixed traditional African dance with that of modern dance, Cleopatra and Caesar’s relationship grew more strained. He had been cheating on her, and Cleopatra was quick to dump him when she found out. The message became one of female empowerment as the women on stage displayed their skill. For their hard work and stunning performance, PATU was awarded the second-place trophy. The award acceptance, as described by Monique Edwards, co-captain of PATU and CSON ’17, was the culmination of many hours of practice.

“We placed last year so we were expecting nothing less,” she said. “It was worth it.”

The award-winners were not the only cultural groups to put on a stunning show at Showdown. Vida de Intensa Pasión (VIP) was the first cultural group to dance that evening. The Latin dance group had chosen for its theme a party vibe. The men were dressed in flowery shirts, while the women wore colorful tops and flowing-white skirts. The team danced its way through a night on the town, moving sensually and passionately across the stage. At one point, two-dimensional painted “taxis” arrived to take the team to their party destination. Spanish party music flew through the air as VIP’s male dancers spun their female counterparts into the air and around their bodies. The theme of VIP wasn’t the strongest featured by the cultural side, as the focus was simply that of a celebration, but the group’s dancing came out in full force.

Masti, BC’s South Asian dance troupe, had chosen a clearer message for the crowd as its theme of the night. Its performance was preceded by spoken words that filled the speakers and the ears of all in Conte Forum. As the voice explained, there are 157 million people in India living without access to clean drinking water. As the lights rose, an evil businesswoman could be seen dumping gasoline into the “Ganges River” that Masti had made as its background decoration.

The team began its dance, incorporating popular South Asian music and Western songs into its performance. Most of the songs continued Masti’s theme of clean water, such as Ugly God’s “Water.” Masti made use of sapps, a Punjabi clapping percussion instrument, to keep the beat, as well as for their visual appeal. Throughout the dance, the team continued to push its message of clean water, evidenced by three dancers “punching out” the evil businesswoman and removing all of the trash and debris from the river. The dance, as well as the message, seemed to electrify the members of Masti, and it kept them buzzing even as they left the stage. Their showdown performance, as described by Sourabh Banthia, Masti co-captain and CSOM ’17, was a whirlwind of excitement and anticipation.

“Honestly I’ve never felt my heart pump that hard and the adrenaline rush through my body,” he said. “I was screaming so hard but I didn’t know until I came off how hard I screamed because my throat hurt.”

The competitive nature of this event leads to these amazing displays of talent, hard work, and emotion. As the crowd poured out of Conte Forum, the air hummed with excitement. Enthused voices, striving to be heard above the noise, shouted about the thoughts and desires for next year’s Showdown performance. BC contains a wealth of cultural talent between its many groups, so no matter the contestants of Showdown 2018, the night will be as electric as ever.

Correction: An earlier version of this article said the above quote by a member of Masti was from Ashruti Patel, MCAS ’17. The quote was from Sourabh Banthia, CSOM’ 17. 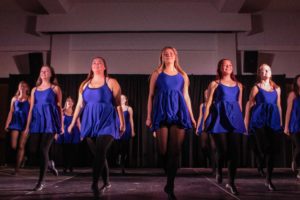