Home » From Childhood to BC and Beyond, Laura Traynham Hannon’s Life on the Ice 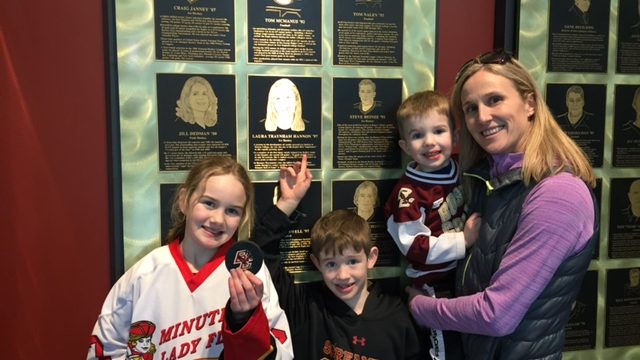 From Childhood to BC and Beyond, Laura Traynham Hannon’s Life on the Ice

Skates, check. Helmet, check. The maroon and gold? She can’t leave without it.

It’s Sunday night, and there’s no doubt where Laura Traynham Hannon is headed.

She’s on her way to the local rink to meet her friends for their weekly hockey league. Made up of former Division I and Division III hockey players, this group of 40-somethings relives their glory days every week from September to April. Many of them have been playing against each other since their youth—this week’s game just happened to have a matchup between the women on her childhood team, the Chelmsford Lions, and her old opponents.

On the ice, she still plays the same way she did during her four-year career at Boston College: not quite so tough, but with a special brand of speed. It has been a long time since she wore that jersey to play for the Eagles. She—or any of her friends—really just can’t get away.

“We do it for the love of the game,” Traynham Hannon said. “It’s not a sport you can half-like.”

But for Traynham Hannon, a former captain and now the Director of Communications at Comcast SportsNet New England, hockey is more than just a game. It’s been the catalyst for everything in her life.

t’s not easy to grow up in the 1970s trying to play hockey. But the ice just came calling.

Traynham Hannon first traversed onto a rink at 3 years old, yet her parents, Bill and Gilda, put her on figure skates. After two years, she couldn’t help but notice how much fun her older brother had playing hockey. Initially, it was a blow to her mom—she had always wanted a “girly-girl,” Traynham Hannon said—but she remained supportive, and her dad, of course, was thrilled.

Because of the lack of girls teams in the area, Traynham Hannon had to play with boys from ages 7 to 10. She made every team for which she tried out, sometimes while hiding her identity. On her first tryout, she put her hair up in her helmet so the coaches wouldn’t know she was a girl. Traynham Hannon wanted her hockey skills to speak for themselves, not her gender. Sure enough, it worked.

“They picked me for the team, and I think the coach was surprised, maybe a little disappointed, when my ponytail fell out at the end of practice,” Traynham Hannon said.

At age 11, she moved onto the Chelmsford Lions. Funnily enough, Traynham Hannon can’t recall a single person from Chelmsford on the team. The Billerica, Mass. native remembers girls coming from all over to play in one of the only girls’ travel teams in New England. One of those girls came all the way from Salem, N.H.: current women’s hockey head coach, Katie Crowley. Traynham Hannon said that the Lions played the same three teams in a cyclical fashion. Instead of getting bored with her competition, she relished the opportunity to create such a tight-knit community.

But that experience led her to fear joining one at school she considered big at the time: BC.

As with most 18-year-old recruits, though, Traynham Hannon fell for the spires of Gasson and the beauty of the (constantly) new grass. It didn’t take much for Tom O’Malley, then the head coach, to convince her to join the program.

Her first season, 1993, the Eagles did not yet hold club status, something the team had been fighting for since the 1980s. Yet her freshman year still had plenty of memorable experiences. She remembers taking a trip up to Maine in late November, the same weekend that No. 17 BC football took on No. 1 Notre Dame in South Bend, Ind. While all of her friends were crowded around televisions in dorm rooms or in McElroy Commons, she was on the ice. Because of that, she missed arguably the greatest non-Flutie game in BC history: David Gordon’s game-winning kick to help the Eagles beat the Fighting Irish, 41-39.

“When I came back to campus, my non-hockey friends said, ‘This is exactly what we expected college to be like!’” Traynham Hannon said. “And I replied, ‘Oh, I was up in Maine, with a 10 o’clock curfew.’”

But that game was worth missing for just an average weekend with her teammates. And after the first season, O’Malley and the Eagles finally won their fight to earn varsity funding.

Never known as a strong player—something she claims her dad would echo—Traynham Hannon’s skill came from her speed and unselfishness. She never dangled around players because it was always about moving the puck up as soon as possible. Once Erin Magee, BC ’99 and one of the Eagles’ all-time best players, joined the program in the fall of 1994, Traynham Hannon got the perfect partner on the same line.

“I didn’t care if they were my points,” Traynham Hannon said. “It’s all about the team’s points.”

Even if she didn’t care about her own points, Traynham Hannon got plenty of them. She graduated BC as the program’s all-time leader in points (125) and goals (56) in just three official seasons. Her 125 points still have her 11th on BC’s all-time list, sandwiched between Jennifer Buckley, BC ’01, and current junior Megan Keller. Her goal total is still good for 10th on the list, tied with Meghan Fardelmann, BC ’09.

And others began to notice her hockey accomplishments, too. The team voted for Traynham Hannon as captain in her senior year. BC inducted her into its Varsity Hall of Fame in 2011. But her most proud feat came when she was chosen for the Women’s Beanpot Hall of Fame in 2009, the second Eagle behind Magee to earn the honor. She recalled great crowds at Northeastern’s Matthews Arena playing in the tournament. In the pre-NCAA Tournament days, the Beanpot provided the women with the unique opportunity to feel like a kid again, to earn a trophy. And for her kids to see her receive that honor meant the world to her.

“It was nice to look back and see how hockey still makes an impact on my life,” Traynham Hannon said.

ut for Traynham Hannon, training for the United States National Teams wasn’t the path—as long as she could still work in sports. She got her opportunity when O’Malley put her in touch with someone from the NHL at a social gathering. The two of them talked for quite some time, as Traynham Hannon exemplified her experience within the sport. With the 1998 Nagano Winter Olympics approaching—the first games in which NHL players would play and the first one in which women’s hockey was an officially sanctioned sport—the NHL needed an expert in the field. Sure enough, just three months out of BC, the NHL helped push Cohn & Wolfe to hire her as a publicist and account executive on a temporary basis.

“If that guy was in the bathroom, I don’t know where I would’ve ended up,” Traynham Hannon said.

Over the next four years, Traynham Hannon worked between Cohn & Wolfe and Edelman Worldwide on various accounts ranging from MLB, the LPGA Tour, and the Jamaican Bobsled Team. Soon after, the one league she didn’t know much about came calling: the NBA. But, through 11 years as a manager of corporate communications and director of marketing, Traynham Hannon helped the Association thrive—though she doesn’t take credit, the league’s popularity boomed during this time, highlighted by their successful “Where Amazing Happens” campaign in 2007.

Now, she thrives at CSN New England as a Director of Communications. Her current project is Tomboy, a multi-platform documentary that aims to “elevate the conversation about gender in sports,” according to its official media advisory. Some of the program’s interviews include Olympic gold medalist skiier Lindsey Vonn and Little League World Series pitcher Mo’ne Davis. She couldn’t avoid inserting her hockey roots—Traynham Hannon invited her old friend, Crowley, to speak at the Tomboy Symposium this March at Suffolk University.

In fact, there’s really nowhere for hockey to hide in Traynham Hannon’s universe. Her hockey experience led to her education and her career. Because of hockey, she met her husband, Tim, in a street hockey league in Manhattan. Their 9- and 7-year-olds already play hockey, and their 3-year-old has a stick in his hand, too. No matter what she does, it all comes back to the ice and to the Eagles.

“Every aspect of my life has come back to touch my hockey world,” she said. “And I owe a lot of it to BC.”