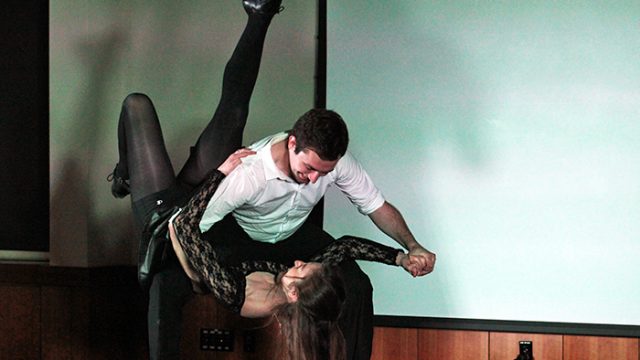 All Things Swing Brought to ‘Lindy Hop ’til You Drop’ Show

JP Neisewander, CSOM ’18, hoisted Izzy Mueller, MCAS ’18,  into the air. As he held her upright, she made her body almost vertical, supporting herself on his shoulders. In an image of two people bracing one another reminiscent of the show as a whole, Full Swing impresses with the dynamism of two people as part of a larger organization.

Brimming with smiles and evincing a fun-loving demeanor, Boston College Full Swing transferred its infectious attitudes to the hearts and minds of spectateurs. Its jovial spirit, embodied in its members, was felt with every lift and flick of the head. Much like its use of momentum on stage, Full Swing used the momentum from its AHANA Leadership Council Showdown People’s Choice Award win to put on an incredible display of all things swing in Lindy Hop ‘til You Drop.

“Chelsea Dagger,” choreographed by Mueller, and Dante Keeler, MCAS ’17, saw a tale of love and affection blossom on stage. The all-black dress and caps donned by those in the background contrasted the white garments of the centerpiece dancers. This allowed for the focus to be shifted to the movements of the two lovers, supported by those clad in black. During the dance, the idea of support was solidified when the troupe executed a cascade of lifts and spins amongst couples as they remained stationary across the stage.

The next dance “Light It Up,” choreographed by Ilektra Andoni, MCAS ’17, and Wild Bill Stone, MCAS ’19, saw its members fit with bright colored dresses and shirts, with a few sporting bow ties and suspenders. As they danced merrily about the stage, the dance oozed a party scene vibe as dancers smirked and spun. At one point, two of the men threw their legs into the air in a handstand, pulsing them around as the lights fluctuated in color.

Synergy took the stage as the first guest performer, giving a second viewing of its “Game of Life” performance. The smaller setting did not dampen the effects of its movement as the choreographery remained strong and succinct in this smaller setting.

Described by the Asinine announcers Matt Blue and Luke Smith, both MCAS ’19, as a “salad of moves” and a “delicious pudding,” “Black and Gold,” choreographed by Han, was a tender dance that had all the flashiness of lifts, but executed in a slow and delicate fashion. Championing the Full Swing attitude of having fun, this dance saw a slew of moves acted out on stage, loosened  by their choreographed muses. Gingerly dipping partners and holding them.

After a rousing guest performance by BC Irish Dance (BCID), both groups set up on stage in a genial collaboration. Fusing styles and sharing moves to Ed Sheeran’s “Galway Girl,” Full Swing members spun the girls of BCID while throwing in a few tamer lifts. Embracing the Irish tradition, Full Swing members agilely stepped to the intricate footwork. This piece was a sweet melding of styles that did justice to both disciplines.

Keeping with the light-hearted themes of the evening, even Blue and Smith decided to show off their skills in the interim. Clasping hands and comedically giving themselves to dance with Tom Jones’ “It’s Not Unusual” the duo even executed a backward flip. Though they admitted to taking only one lesson, it seems to prove that indeed anyone can dance.

An all-ladies swing routine, “Ex’s and Oh’s,” choreographed by Anna Ritoch, MCAS ’17, and Morgan Hamill, MCAS ’17, challenged the gendered norms of the dance while keeping with stylistic tradition—it was the first of its kind in the group’s history. Though the ladies could not execute the more physically demanding lifts, the overall spunky attitude of the piece as well as the chemistry between the girls made the piece enticing and elocutionary.

“Zip Gun Bop,” choreographed by Paige Hanauer, CSOM ’18, and Jason Rothstein, MCAS ’19, was an exuberant display of flashing lights and flashy moves. Stylized to the story of Bonnie and Clyde, the cops and robbers game played out on stage as the famed fugitives evaded police through vaults and the opposing forces became entangled in dance. The incorporation of this theme into the performance was truly impressive as the narrative was wholly played out comprehensively with tact.

To end the night, Full Swing, along with alumni members, threw down their best moves to showcase the dramatic and intense dance skills they have acquired from the organization. To end on such a showcase strikes at the heart of the organization as it looks to the future to expands its successes and keep on swinging at BC and beyond.

After being held for several impressive seconds, Mueller was brought down as gracefully as she went up. Though the strong vertical image came down, Full Swing’s ascension in the BC dance community appears to still be climbing and stretching ever higher.