On Saturday evening, pizza and coffee lined the walls of Carney 103 as eight sleep-deprived teams demoed the projects they had worked on at Hack the Heights, Boston College’s first ever “hackathon.”

From Friday at 6 p.m. to Saturday at 6 p.m. around 50 students gathered in Carney for a series of workshops, seemingly unlimited food, and hours of working on a project. The hackathon, put together by the BC Computer Science Society (BCCSS), was sponsored by General Electric, Optum, PwC, Jebbit, and Google.

Despite sleep deprivation and a time limit, students were able to form teams, decide on a project, identify what needed to be done, and split up the work. At the end of the hackathon, eight teams had finished projects ready to be judged. Students created innovative apps that kept track of and mapped their classes, mapped the location and status of water stations, helped autistic children identify and express emotions, among others.

Hackathons allow students from all different backgrounds and levels of computer science knowledge to come together and work on a project from the ground up in a fun environment. The project can be anything that students want to work on, whether a pre-existing idea, or something that is thought up during the hackathon itself.

Throughout the night BCCSS lined up a series of workshops, held a screening of The Social Network, and secured food donations from the sponsors and BC’s computer science department. Throughout the 24 hours, the food added up to a feast of 60 El Pelon burritos, 45 pints of ice cream, 50 total pizzas, three dozen bagels, four dozen donuts, and eight “Box ‘O Joes” from Dunkin Donuts.

Four prizes were awarded to a general first place hack, a general second place hack, a GE prize for the best hack for social good, and a beginner’s prize for the best hack by a beginner student. Teams were judged on creativity, utility, and complexity. Three computer science faculty members, Robert Signorile, Howard Straubing, and Rosemarie Tagliamonte were the judges.

“Some of these were individual projects, but having the structure of a group like this and deciding who’s going to do what and then making that work together is something they probably don’t do enough of in class,” Straubing said.

Users of Emotus are prompted with an emotion—happiness, sadness, or anger—and asked to express it through a front-facing camera. Using facial recognition, the app will congratulate the user if the expression matches the prompt.

Bryan Lee came up with the idea while at a bar the night of the hackathon. He said he left the event and his teammates to go to the bar and was talking to a friend who was doing research related to the topic. During the second day of the event, the team started and finished the project.

“I’m really glad that BC has started doing hackathons,” he said. “I think it’s a really good step because computer science here is very small.”

The general second place prize was awarded to a team of four that created an app called Don’t Skip Class. The team, Thomas Ding, MCAS ’20; Zhangyang Wei, MCAS ’18; Jie Zhou, MCAS ’18; and Xueliu Wang, MCAS ’18, created the app to help students navigate campus and their classes. They were awarded a Raspberry Pi Kit and a $50 Amazon gift card. A Raspberry Pi is a credit-card sized computer.

Users enter their class schedules into the app and are then able to see their classes for each day mapped out on BC’s campus. The app also shows students which lunch location is most convenient given their class location and times. If students need to miss class, or have already missed class, the app has a feature that allows students to send a pre-written email explaining their absence.

Wang said the idea for the app came from the team’s personal experiences of being confused on how to navigate campus during freshman year and morphed into an app that all students can use to keep track of their days.

“We kind of wish we could’ve had this kind of event when we were freshmen,” Wang said. “It was really fun and we learned a lot. I’m kind of jealous.”

The Beginner’s Prize was awarded to a single-man team who created a game called “Feel the Bern.” Julian Matos, CSOM ’20, got the idea of using Bernie Sanders as the character in a simple running game after seeing all the games that made fun of Donald Trump. The user must avoid the fat cats in suits along the path and try to collect stars.

“I thought about making this way back during the election cycle, but I never really got around to it,” Matos said. “So when I started thinking about it, that just popped into my head and I got to finish it.”

The GE Prize for the best hack for social good was awarded to a team of three, Brennan Nugent, MCAS ’20; Jake Mnich, CSOM ’20; and Ben Meisenzahl, MCAS ’20, that created an app called Refill. Refill addresses the problem of not knowing where to fill up water bottles by allowing users to drop a pin where there is a water refill station. Users can also update the status of the filter station if it is working or not.

“I got the idea when I was looking for a water station,” said Nugent. “It was fun, and I’m looking forward to the next [hackathon].”

“The whole idea of a hackathon is to start and finish a project contained in the event,” said Cam Lunt, MCAS ’17. “When it comes to making apps or websites or any sort of idea, you can get a lot of ideas that you might start and want to explore but then forget about when class gets really busy.”

Lunt said that a hackathon gives students a place and an opportunity to explore ideas that may have taken a backseat to course work over the year.

“We have a smaller computer science community on campus which can be a downside because obviously we don’t have as many resources as a big school like MIT, but it’s also a big plus in that our community of students is very tight-knit,” said Jesse Mu, MCAS ’17. 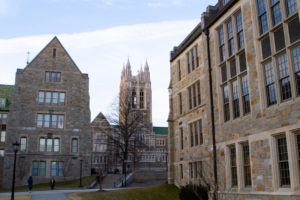 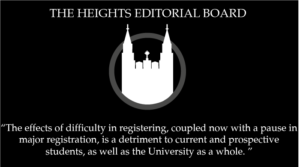