Home » After Louisville, Brown Still the Starter, O-Line on the Up 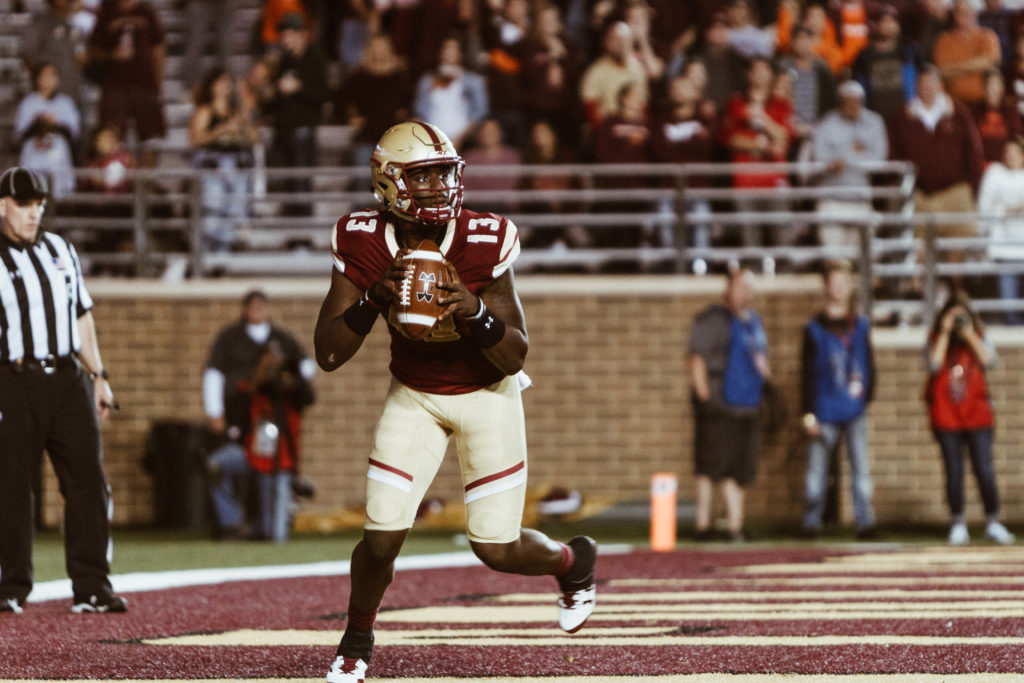 After Louisville, Brown Still the Starter, O-Line on the Up

Boston College football quarterback Darius Wade was nearly perfect on Saturday. After replacing a banged up Anthony Brown, the lefty led the Eagles to four-consecutive touchdown drives—one more than they had recorded against ACC opponents all year—and a 45-42 upset victory over Louisville. It was by far Wade’s best game as an Eagle, even without a single career high. But it wasn’t enough to win the starting job.

“There’s no quarterback controversy here,” Addazio said. “I mean one young man got hurt in the course of the game, and the other young man went in and did a great. And that’s the way it rolls. We’re going to keep going the way we’ve gone.”

Addazio noted that he doesn’t have an update on the redshirt freshman’s injury, and that he probably won’t know his status until later in the week. Brown reinjured his throwing shoulder in the third quarter of Saturday’s game when Cardinals linebacker Jon Greenard got by Chris Lindstrom off the edge and dragged the redshirt freshman to the ground by his shoulderpads. Brown’s shoulder pain started three weeks ago after he took a hit late in the game against Clemson. Following the initial injury, he missed a full week of practice leading up to the Central Michigan matchup. Yet he still got the start against the Chippewas.

Brown has taken a handful of hits over the past few weeks. Missed blocks have routinely forced the Cliffwood, N.J. native out of the pocket, and occasionally onto the ground. That being said, the offensive line has shown significant improvement in the run game. Since Week Five, the Eagles have averaged 247 yards on the ground. All of a sudden, the unit has consistently created space in between the tackles, something that it struggled to do for much of the beginning of the year. Week-by-week, Addazio is incorporating new plays and schemes to diversify the rushing attack.

On Saturday, he called more zone reads for Brown. Additionally, in short-yardage situations, he pulled Lindstrom off the line and inserted him in the backfield. Acting as a fullback, the 305-pound guard served as an extra hat at the point of attack, in order to open a big enough hole for either A.J. Dillon or Jonathan Hilliman to move the chains and even score.

Lindstrom has been everywhere this season: guard, tackle, and, now, the backfield.

“Chris is playing at a high level right now … he’s developed into being one heck of a lineman,” Addazio said. “I think he was ACC Lineman of the Week this week, and honestly, justifiably so.”

Addazio believes that the junior is coming into his own this season. With center Jon Baker out for the year with a knee injury, Lindstrom is the heart and soul of BC’s offensive line.

Two games into the season, the Eagles were down to their third center, Ben Petrula. Six weeks later, the true freshman, and those beside him, are finally starting to gell, and apparently so is the rest of the team. BC’s 45 points on Saturday were the most an Addazio-coached team has ever scored.

But as the fifth-year man often says, anything can happen in this game. The statement is best evidenced by the Eagles’ next opponent: UVA. Before this season, the Cavaliers were picked to finish last in the conference. A few months later, and they’re off to their best start in 10 years.