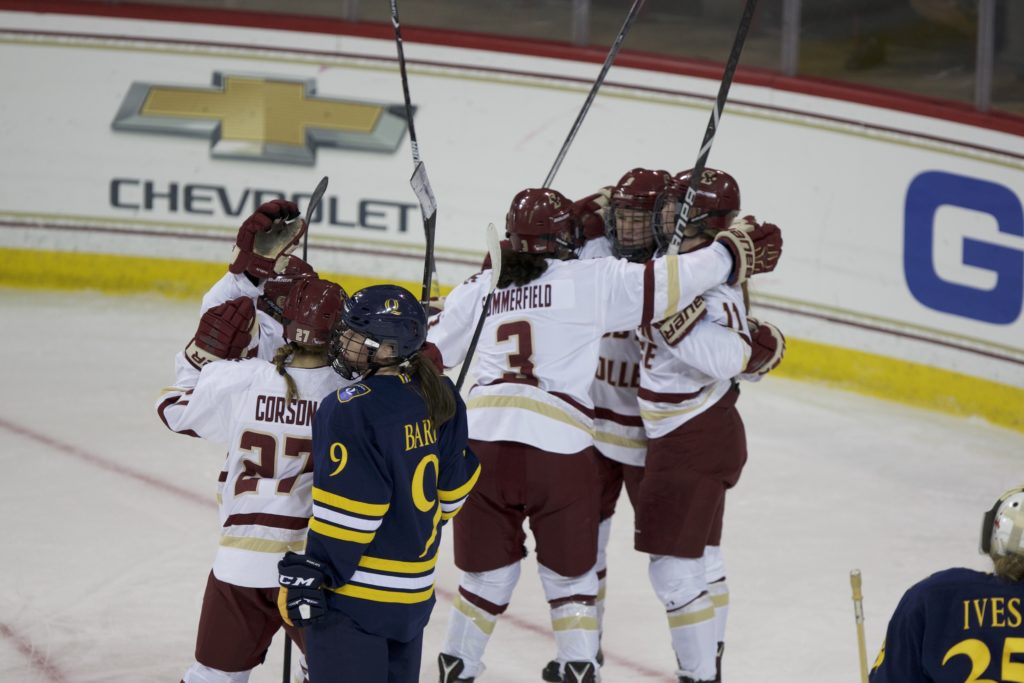 The sound of the whistle rang out through Kelley Rink as the referee raised both his fists in front of him and motioned them forward. Erin Connolly had only been on the ice for 16 seconds before she was sent back into the box. In less than 10 minutes, Boston College women’s hockey had tallied three penalties.

After 11 days of rest, the No. 3 Eagles faced Quinnipiac for the 26th meeting between the two programs, and this one got physical. BC has dominated the series, not having lost to the Bulldogs since 2013. Tuesday night was no different when the Eagles clinched a 4-2 victory.

From the first faceoff, BC had a commanding presence on the ice. The puck was constantly in front of goaltender Abbie Ives, but the Eagles couldn’t find a hole in the Bobcats’ defense. The first penalty of the game was called on Daryl Watts for tripping less than five minutes into regulation. The early disadvantage didn’t faze the Eagles, and they killed off the penalty with ease. Soon after they returned to full strength, Connolly was booked for checking. Again, the Eagles were able to bar the Bobcats from capitalizing on their advantage.

Less than 20 seconds after leaving the box, Connolly was sent back in. This third power play was what Quinnipiac was waiting for. Kenzie Lancaster thought she found a hole in the BC defense, but Katie Burt denied her chance at a goal. Caroline Ross wasn’t quick enough to swipe away the rebound, and Brooke Bonsteel was able to sneak the puck past Burt and into the net. The Eagles were given an opportunity when Bonsteel was later called for holding, but they couldn’t connect and headed into the locker room trailing by one point.

The Eagles didn’t let the Bobcats’ early lead get to them, as they came back out aggressive. Shortly into the second period, Watts passed the puck across Ives to Makenna Newkirk, and the junior co-captain found a narrow opening between the goaltender’s legs to tie up the game.

“I really really was impressed with our second period especially,” head coach Katie Crowley said of her team. “They didn’t get down because we were down by a goal. They did a great job and our leaders ended up stepping up with Newkirk having a goal there to tie that up is something that we look for her to do.”

The Eagles only built on their momentum. Watts found herself in front of Ives soon after her first assist, and instead of taking a shot she set up Caitrin Lonergan. The Roslindale, Mass. native was left with a hole when Ives was busy trying to block Watts, and easily sunk the puck into the back of the twine to give the Eagles the lead. Quinnipiac was given a chance at redemption when Serena Sommerfeld was sent into the box for interference, but their opportunity was cut short when Melissa Samoskevich was called for hooking.

The last period only added fuel to BC’s fire. Watts was passed the puck from Lonergan and headed toward Ives, leaving her defenders behind. Her shot was deflected off the pads, but slipped through the sophomore’s legs. Willow Corson was right there, and snuck past the traffic in front of the net to sink in the puck for her first collegiate goal.

The freshman could only credit her goal to her teammates.

“It’s not too hard when you have great teammates behind you,” Corson said. “We’re all great playmakers and [Watts] and [Lonergan] can put it in the back of the net. I just love playing with them and making plays up to them and we all just work very well together.”

Soon after her teammate’s exciting first goal, Watts was given another opportunity. After being set up by Lonergan and Corson, she took a head-on shot and sent the puck sailing over Ives’ shoulder into the net. The freshman Watts was named Hockey East Player of the Week after her fiery performance against Minnesota Duluth, and contributed to three of the four goals the Eagles scored.

Despite a late goal by Lancaster, the Bulldogs couldn’t find the momentum they had in the first period, and fell to BC. The Eagles held a commanding presence throughout the game, showing they’re a force not to be taken lightly in the 60 minutes they’re on the ice.