Home » Injury-Riddled Season Was Exactly What BC Needed 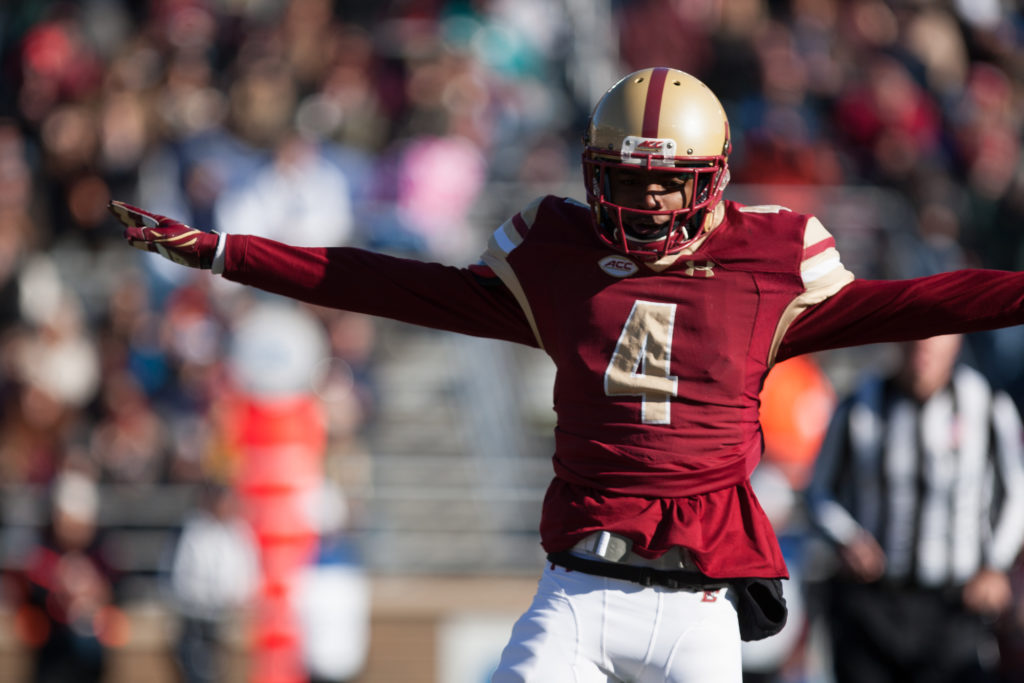 Injury-Riddled Season Was Exactly What BC Needed

Already leading 20-3, Josh Jackson and Virginia Tech were on the move. Inside Boston College territory, the redshirt freshman quarterback snapped the ball out of the shotgun and surveyed the field. Within seconds, Harold Landry was in his face. Bolting off the edge, the senior defensive end bull-rushed through a pair of Hokies. Before Landry could wrap up Jackson, Noa Merritt swam past the Tech center and dove for the redshirt freshman’s legs. But in doing so, Merritt rolled over Landry’s right ankle. Still, the NFL prospect finished the play. With one hand, Landry brought Jackson down by the shoulder pads, recording his third sack of the night and the 26th of his collegiate career—a mark that tied the Eagles’ all-time record.

But it was also his last of the regular season.

As soon as Landry threw Jackson to the ground, he jumped up and started skipping away from the play. Moments later, he was limping. All of a sudden, he stopped. The senior reached down and pointed to his right ankle, before falling to the turf. His night was over, and, in reality, so was his season.

Landry saw limited action in the next two games, and sat out the remaining four. He was just the latest victim of the injury bug—one that the Eagles caught back in the spring when offensive guard Elijah Johnson tore his ACL. But Landry’s ailment carried more weight than the other injuries. Regardless of BC’s record, he gave fans something to cheer for. Projected to be the first defensive end off the board in the upcoming NFL Draft, Landry put a reeling Eagles team on the map. Missing its star player, along with a handful of others, BC was as helpless as ever.

The injuries didn’t stop, but the misery did. The Eagles won five of their last six games, and with time, it became apparent that losing seven starters for the season was the best thing that could have happened to head coach Steve Addazio’s team.

Following the loss to then-No. 16 VTech, Addazio walked into the Yawkey Athletic Center for his postgame press conference, just like he would for any other home game. But this wasn’t your typical Q&A session. Rather than dancing around the defeat, using strength of schedule and injuries as his key talking points, Addazio took the blame for BC’s 2-4 start, and proceeded to make a promise.

“It’ll come together, and it’ll be beautiful,” he said. “You can write that one down.”

It wasn’t long before the team captains led a players-only meeting—a gathering that A.J. Dillon later labeled the turning point of the season. Addazio repeated time and time again that he didn’t know exactly when everything would “come together.” But BC’s play answered that question just a week later.

Against Louisville, the Eagles totaled 555 yards of offense and recorded 40 or more points against an ACC opponent for the the first time in the Addazio era. Dillon headlined the shootout victory, racking up 275 yards and four touchdowns on the ground. Naturally, the true freshman’s breakout game overshadowed the play of BC’s makeshift offensive line. A unit that struggled to consistently open up holes in between the tackles throughout the first half of the season was practically flawless at Louisville. At times, Dillon would make it 10-15 yards downfield before even being touched.

While the power back had the stats to show for his electric performance, another true freshman was the motor behind it all. Ben Petrula, who replaced Jon Baker at the center position after the senior went down with a season-ending knee injury in Week One, was finally starting to settle in, and even thrive in the offense. Not only was the Eagles’ rushing attack dramatically improving, but so was its play-action passing. Suddenly, a throw game that had previously amounted to nothing more than screen passes and a few crossing routes here and there, was threatening.

The next week, BC poured on 41 points against a 5-1 Virginia team, stealing its second-consecutive conference road game. Yeah, Anthony Brown threw for a career-high 275 yards and three touchdowns, but without the guys on the defensive side of the ball, the Eagles wouldn’t have put up the same kind of numbers.

Since both Connor Strachan and Max Richardson sustained season-ending injuries, BC’s linebacking corps was among the weakest in the ACC, as far as depth was concerned. Yet, week-by-week, Ty Schwab, and backups Kevin Bletzer and John Lamot rose to the occasion. And it all started in Charlottesville, Va. Bletzer showcased the ability to close on the ball, whether it be in the backfield or sailing deep down the field, forcing him to temporarily drop back in coverage. On the other hand, Lamot was a tackling machine. Despite not playing the first three games of the season, he recorded 10 or more tackles on three separate occasions. But perhaps his most memorable accomplishment was his 40-yard pick six that put an exclamation point on BC’s blowout win over the Cavaliers.

When Florida State came to town, it was Schwab’s time to shine. The senior was everywhere on the field, tallying a career-high 12 tackles, one sack, and even an interception. Schwab, now the leader of the Eagles’ linebacking unit, was clearly in his element. In the trenches, Wyatt Ray made his first start in place of Landry, and quickly established a rapport with fellow defensive end Zach Allen. The two terrorized Seminoles quarterback James Blackman, disrupting any sort of offensive rhythm that the true freshman was attempting to materialize.

BC hammered FSU, scoring its most points against the Seminoles (35) in program history. For the first time in four years, the Eagles were winners of three-straight ACC games. Better yet, they had a bye week on tap. But just when it looked as if BC had it all figured out, it lost a few more players to injury. And not just any guys—its signal caller and its defensive captain.

Shortly into the Eagles’ bout against then-No. 23 North Carolina State, both Brown and cornerback Kamrin Moore were sidelined with season-ending injuries. Darius Wade replaced the redshirt freshman behind center, and Hamp Cheevers filled in for Moore. Cheevers made an immediate impact, breaking up a couple of Ryan Finley deep balls. But it took Wade a little longer to find his footing—a full week to be exact.

Although Addazio insisted that BC wouldn’t make any changes to its gameplan with Wade in at quarterback, it was obvious that the Eagles were a different team with the graduate student at the helm. The number of pass attempts decreased, especially those downfield, and BC shifted back to a run-first offense—Addazio’s bread and butter. But to his credit, Wade regrouped at Connecticut, and finished off the season with a career day at Syracuse.

That being said, with the way his defense was playing, the fourth-year gunslinger had quite a bit of wiggle room. By the last week of the regular season, Jim Reid’s unit was as selfless as any in the conference. So much so that when Cheevers broke up a backward pass in Orange territory, essentially forcing a fumble, he didn’t even scoop up the ball and take it to the end zone himself. Instead he made eye contact with safety Will Harris, and let the senior do the honors.

In spite of all the adversity, BC evolved. Entering the season, all the talk surrounded Landry and the quarterback controversy. Before just about every game, commentators would spotlight the high-profile defensive end, and, simultaneously a graphic listing Landry’s accomplishments would pop up on the screen. Then, they might mention how Brown beat out Wade in an offseason quarterback competition. Besides that, the rest of the team was unknown outside of Chestnut Hill.

But as soon as the injuries started to pile up, players who normally would’ve sat out the entire year, were given the opportunity to star. And that’s when the Eagles really gelled. BC’s season was no longer about one guy making a push for the No. 1 overall pick, but rather it was about a group of men proving the doubters wrong, including their own “fans”.

Over the course of the final six games of the regular season, the Eagles averaged 36 points per game—19.7 more than they posted in the first half of the year. To put that in perspective, if BC had put up that many points from the start, it would have finished the season as one the 20-highest scoring offenses in the country. Possibly even more impressive, the Eagles averaged 451.5 yards per game, and scored 40-plus points three times, something that they had only done once in their first 96 ACC games.

So yeah, everything came together, and it was, well, beautiful.

But without a host of injuries, BC might not have started 2-4. And, hey, maybe that player’s meeting never happens. While some might speculate that the Eagles would have won eight or nine games if guys like Baker, Landry, Strachan, and Brown didn’t go down, I’d counter that they could have just as easily missed out on a bowl game.

When Addazio took the head coaching job at BC, he didn’t shy away from long-term goals. He employed a five-year plan that, in his mind, would get the Eagles back in the thick of the ACC title conversation. But over the course of the first four and a half years, it was hard trace any sort of consistent progression. It appeared as if Addazio was simply playing it by ear—first running a pro-style offense with Chase Rettig, then switching to the option with Tyler Murphy, and finally returning to a ground and pound rushing attack with the Patrick Towles in 2016, before installing a balanced, up-tempo offense this season.

It took a boatload of injuries for Addazio and Co. to take the first real step toward finding their identity—a team that will run the ball down your throat, and keep you off-balanced with a potent play-action passing game, not to mention a turnover-hungry defense. When Landry laid on the turf of Alumni Stadium with a 17-point deficit looming over his head, it appeared as if BC’s season was over. But actually, it was just getting started.