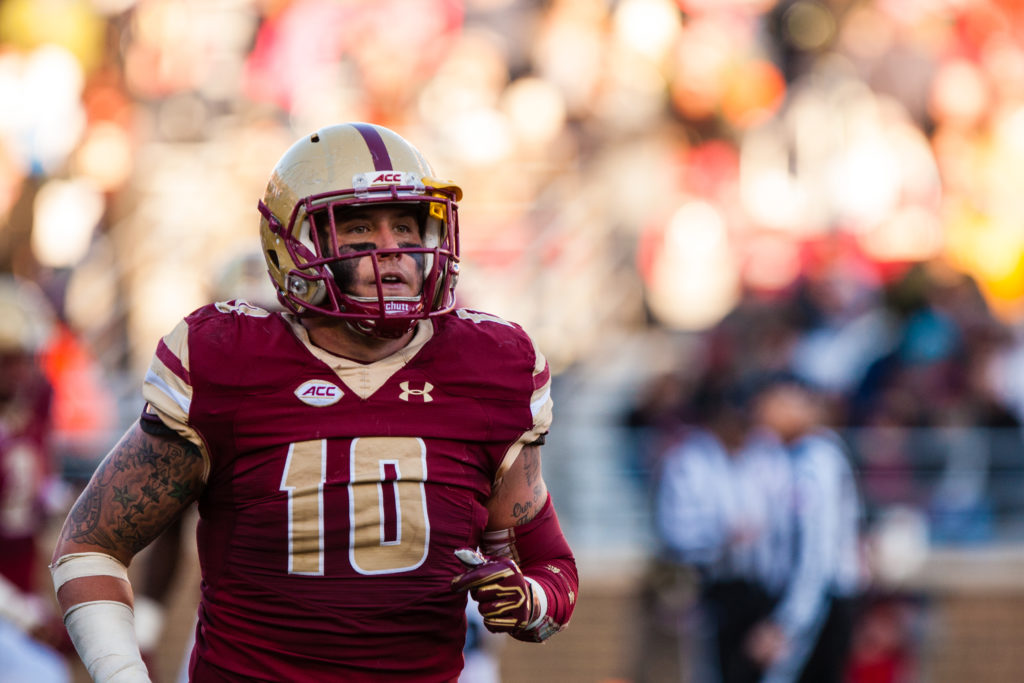 The star players in Wednesday’s Pinstripe Bowl are well known. Iowa linebacker Josey Jewell and cornerback Josh Jackson are consensus All-Americans, and Boston College running back A.J. Dillon—ACC Offensive Rookie of the Year and Rookie of the Year—is one of the most valuable players in his conference, and one of the most powerful running backs in the country. But who are the x-factors?

The Eagles finished the season allowing the fourth-lowest passer rating against (100.75), on par with the likes of Alabama and Wisconsin. This success was due to the combination of a stout defensive line anchored by Zach Allen (five sacks) and a ballhawking secondary that was tied for third in the nation in interceptions. The Hawkeyes aren’t a pass-happy team, but they’ll have an even harder time with Paulsen, a sophomore with one start on the line in his career, thrown into the fire.

Paulsen will be playing after 12-game starter Alaric Jackson violated team rules. Jackson protected the blind side of quarterback Nathan Stanley well, as Iowa only conceded one sack a game with him blocking up front. However, with Jackson out, right tackle Tristan Wirfs will slide over to the left side, and Paulsen will take over on the right. It’s a big change right before a bowl game, and it’ll be interesting to see how the Hawkeyes’ offensive line responds.

Center James Daniels and guard Sean Welsh are NFL prospects, but there’s only so much they can do if Paulsen struggles. His last start was over a year ago, in November against Illinois. The Hawkeyes’ line didn’t allow a sack and won 28-0, but that came against a Fighting Illini team that finished just 3-9 and 92nd in scoring defense. Paulsen will have to step up, as it’s a sure thing that the Eagles’ front seven will target him.

At the start of the season, linebacker looked like one of the Eagles’ strongest positions. Anchored by returning leading tackler Connor Strachan, the corps also had guys like Ty Schwab and Sharrieff Grice coming back. However, Strachan went down with a knee injury and Grice, the projected middle linebacker, left the team. Redshirt freshman John Lamot and redshirt junior Kevin Bletzer had to step up to join Schwab, and the result was nothing short of impressive. In 11 games, Lamot piled up 32 tackles, good for fifth on the team. He had seven run stuffs and six tackles for loss, while Bletzer piled up 5.5 tackles for loss as well.

Schwab was the guiding influence, leading the team in tackles, and he’ll need to help lift his unit up as they face a tough Iowa offense. The Hawkeyes slow it down and lean on the run more, but mix in plenty of dangerous play-action passes with a capable Stanley under center.

“They run a lot of under-center stuff, so getting up the field and recognizing their play-action passes is going to be a huge part of our game,” Schwab said during the New Era Pinstripe Bowl Media Day last Monday. “We’re going to have to have a lot of coverage sacks and get to the quarterback as fast as we can and just cover.”

With Stanley and a dangerous running back in Akrum Wadley, a lot of pressure will be on the linebackers at the second level. Schwab has a pair of interceptions on the year and has proved adept in coverage, recording 11 run stuffs—second on the team. This game looks to be close and low-scoring, and the Eagles linebackers will have to come ready to play.

Just 21 players in all of college football have accumulated double-digit receiving touchdowns this season, and one of those is Iowa’s Rob Gronkowski-esque tight end: 6-5 sophomore Noah Fant. Weighing in at 230 pounds and running a 4.64 40-yard dash (measured his senior year of high school), Fant is a matchup nightmare and one of Stanley’s favorite targets. He’s recorded 10 touchdowns on just 28 receptions, including a two-score performance against Ohio State.

Fant was held without a touchdown in three of Iowa’s five losses, and as Stanley’s No. 2 receiver behind wideout Nick Easley, he’s clearly crucial to the Hawkeyes’ success. The Eagles were burned early in the year by small, shifty slot receivers, but haven’t had to deal with someone Fant’s size and ability in a while. Louisville tight end Kemari Averett stands an inch taller and pulled in a 22-yard touchdown in the Eagles win back in October but other than that, BC allowed just one score to a tight end, way back in the season opener.

You can expect Stanley to look for Fant often, as the sophomore is averaging over 17 yards per catch. If the Hawkeyes are within the 20-yard line and Fant is targeted, chances are it’ll be an incompletion or a touchdown. He’s pulled in five receptions and they’ve all been for six. Containing him in the red zone is no easy task, and it’s a weapon that Iowa has in their back pocket if Wadley can’t punch it in.

The focus of national television audiences on Wednesday will be Dillon, the ground-and-pound running back who can beat defenders with his speed, size, or a well-placed stiff arm. However, you can’t lose sight of Darius Wade, the Eagles’ backup quarterback, who’s making the first postseason start of his four-year career.

Iowa may rank 40th in rushing yards allowed per game, but it sits firmly within the top 10 in passer rating against, as well as in the top 25 in several advanced statistic categories. The Hawkeyes rank sixth in limiting explosive pass plays, as well as 26th in Bill Connelly’s passing S&P+, a college football rating system. These numbers simply mean that if Wade and the Eagles’ passing game can’t get somewhat off the ground, they risk becoming too one-dimensional.

Against Syracuse in the season finale, Wade went 16-of-20 for a career-high 248 yards and a touchdown, which paired nicely with Dillon’s 193-yard, three-touchdown performance. That was the Eagles’ offense at its best, clicking on all cylinders. An encore performance will be crucial against a ballhawking, explosive Iowa defense. A costly turnover at a pivotal point could be all that separates these two similar teams.