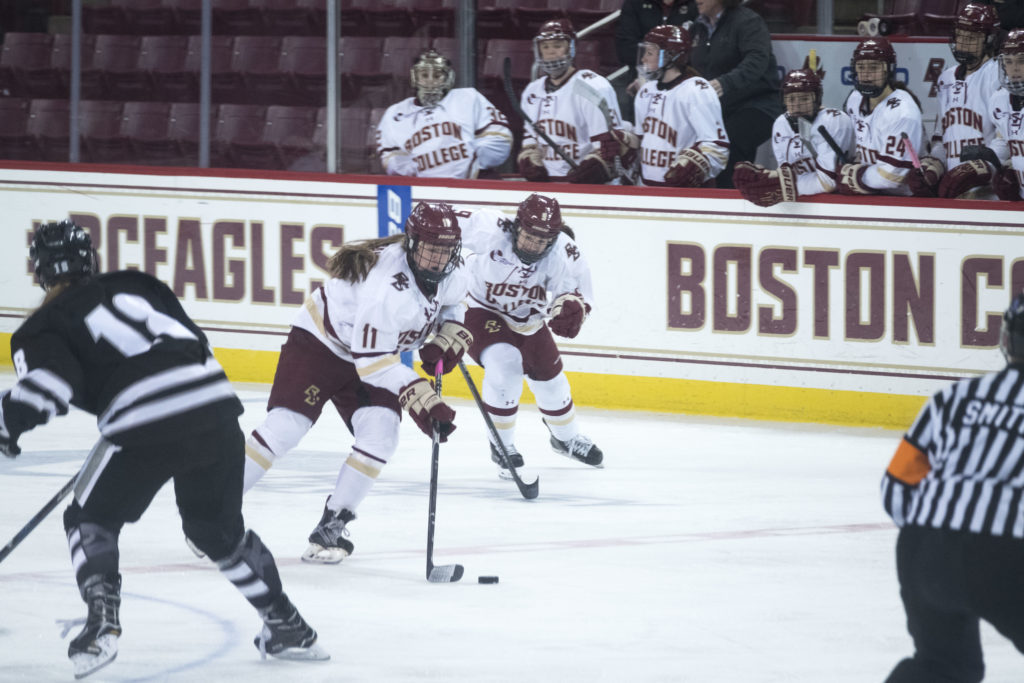 With over a month left in the regular season, Boston College women’s hockey (24-2-3, 17-1-3 Hockey East) has already clinched a 20-win season and locked up the regular season Hockey East title for the fifth year in a row. But the No. 2 Eagles are in uncharted territory.

Thanks to underclassmen Daryl Watts and Caitrin Lonergan, BC is the only women’s hockey team in the past five years—and just the second program in the sport since the 2015-16 season—to carry the top two highest scorers in the country, and it’s not even close. At the moment, Watts (69 points), just a freshman, holds a six-point lead over her teammate, Lonergan (63 points). Yet, aside from those two, no other player in the nation has eclipsed the 60-point mark, let alone recorded 55 points. What’s even more staggering is that if the season ended today, Watts and Lonergan would both conclude the 2017-18 campaign with more points than last season’s scoring leaders, Cayley Mercer (62 points) and Kelly Pannek (62 points).

Assuming that the Eagles play the same number of games as they did a year ago (39), Watts and Lonergan are on pace to finish with 85-plus points apiece—a feat that hasn’t been accomplished by a tandem of players since Wisconsin’s Meghan Duggan (87 points) and Mercyhurst’s Meghan Acosta (86 points) did so in 2010-11—and they weren’t even on the same team.

Having two star-studded players lead the nation in scoring isn’t as rare in the men’s game. In fact, starting in 2013-14, a duo of skaters representing the same program stood atop the scorer’s table for three-straight seasons: BC’s own Johnny Gaudreau and Kevin Hayes (2013-14), Boston University’s Jack Eichel and Evan Rodriguez (2014-15), and Michigan’s Kyle Connor and J.T. Compher (2015-16), but not to the same degree as Watts and Lonergan. In each case, the pairings primarily consisted of at least one “assist-man” of sorts, whereas Watts and Lonergan rank inside the top three in scoring, in addition to racking up more assists than anyone else in the country.

In recent memory, there’s only been one Eagles duo reminiscent of Watts and Lonergan. For two-straight years, they were the faces of women’s collegiate hockey: Alex Carpenter, BC ’16 and Haley Skarupa, BC ’16. Both seasons, Carpenter led the nation in scoring, even winning the Patty Kazmaier Award in 2015. Her partner in crime wasn’t far behind, finishing third in the scoring ranks in the two campaigns mentioned above.

You could even make the argument that Watts and Lonergan are one of the best, if not the best scoring tandem in major college sports this year. This past football season, Southern California, Memphis, and Oklahoma State were the only three FBS teams with a top 10 passer and rusher/receiver, but none of them ranked first in both touchdown passes and reception/rushing touchdowns. The closest you can get is Oklahoma State’s Mason Rudolph and James Washington: The two Cowboys led the nation in passing and receiving yards, respectively. As far as scoring is concerned, though, neither cracked the top three at their position. If you move away from the gridiron and look at the hardwood, you’ll see that not a single team in the NCAA, both men’s and women’s, has two top-50 scorers this season.

Quite simply, Watts and Lonergan are a different breed. They currently fall somewhere in the top 10 of every one of USCHO.com’s major statistical categories, including first and second in scoring, assists, and power-play goals, as well as first and third in total goals scored.

The scary thing is that the Eagles aren’t a two-man show. They’ve got another pair of top-15 scorers in Makenna Newkirk (seventh) and Toni Ann Miano (tied for 15th). Newkirk is one of five players in the country hovering around the 50-point mark. Returning to her freshman year form, the Scottsdale, Ariz. native has upped her goal-scoring numbers from last season and is on the heels of Watts and Lonergan in the assist department. Then there’s Miano—one of three defensemen in the country to land inside the top 15 of the scoring ranks.

All four Eagles have taken over games this season and single-handedly churned out victories. Watts has recorded nine multi-goal performances so far, dating way back to October when she notched in a hat trick against then-No. 4 Minnesota Duluth, completing the series sweep of the Bulldogs. Lonergan has logged a team-high six game-winning goals and has tallied three or more points 11 times this season. In December, Newkirk rattled off two consecutive four-plus point games, orchestrating a pair of blowouts over Merrimack and New Hampshire. Out of nowhere, Miano scored seven goals in a span of a week earlier this month, avenging BC’s loss to Northeastern and pulling out a narrow victory against Vermont.

Players like Kenzie Kent, Willow Corson, and Serena Sommerfield add the finishing touches to an Eagles offense that comes in at second in the country with 4.34 goals per game—an entire goal more than last season’s scoring average. BC scores in bunches and is arguably one of the most watchable teams in the NCAA. Just ask SportsCenter: on Jan. 6, Watts was featured on the program’s acclaimed Top 10 segment, megging a defender and flinging a shot past UNH goaltender Kyra Smith.

The one team ahead of BC in the national rankings, Wisconsin, pales in comparison. Abby Roque, who has netted a mere nine goals this year, is the Badgers’ lone top-25 scorer. The sophomore’s 31 points are less than half that of Watts and Lonergan’s scoring outputs. After Roque, there’s a drop off. Wisconsin’s second-leading scorer, Presley Norby, is 43rd on the national scale, five spots behind Kent—the Eagles’ fifth-best offensive player. The only men’s team close to rivaling the Eagles is Northeastern. Adam Gaudette (39 points) is tied for the national lead in scoring, and teammate Dylan Sikura (35 points) trails by four points, holding down the seventh spot. Neither, however, is putting up the sheer volume of goals and assists that Watts and Lonergan have—not to mention that Gaudette has yet to distance himself from the pack like Watts did months ago.

Not all of the Eagles’ star power is on the offensive end of the ice. In reality, their most established players are the ones protecting the cage. In addition to Miano, Sommerfield, Grace Bizal, Caroline Ross, and Kathleen McNamara have more than just held down the fort this year. Time and time again, the Eagles defense has played an integral role in setting up BC’s forwards, often recording points of their own. Part of the reason why the defensemen can even do that is because they know they have Katie Burt in net—now, as of Saturday afternoon, the all-time winningest goaltender in NCAA history.

Burt is the staple of consistency in the realm of college hockey. She’s on the brink of her fourth-straight 25-plus win season, posting a career .936 save percentage. This year, the senior’s numbers have slightly dipped, but it’s important to remember that she’s playing without three Olympians in front of her.

This winter, BC is sending the largest contingent of Eagles to the Olympics in school history. Alongside alumni Skarupa and Emily Pfalzer, BC ’15, freshman Cayla Barnes and juniors Megan Keller and Kali Flanagan will represent Team U.S.A. on the sport’s biggest stage, making BC the only NCAA school to send more than one current collegiate skater to Pyeongchang, South Korea. The three of them together make up nearly half of the American defense—a testament to just how good BC could have been, at least on paper, if this had been any other non-Olympic year.

Still, the Eagles are poised to make another deep playoff run. They could very well go just as far as Watts and Lonergan take them. In BC’s two losses this season, the underclassmen have combined for a meager one goal. The rest of the Eagles’ offense didn’t fare much better, as the team posted one and two goals, respectively, in the defeats. When push comes to shove, the Eagles’ offense might just be too top-heavy to last an entire postseason.

There’s no doubt BC has talent. With the best goaltender to play the game, a pair of star-studded forwards, and a handful of other skaters not too far behind, the Eagles are by far the most prolific team in the sport of college hockey. Unfortunately for BC, that just means that the expectations are that much higher to finally bring a trophy home to Chestnut Hill—not a Beanpot or Hockey East championship, but a national title.