Home » What’s Next for Piercey and Fletcher Following UGBC Election 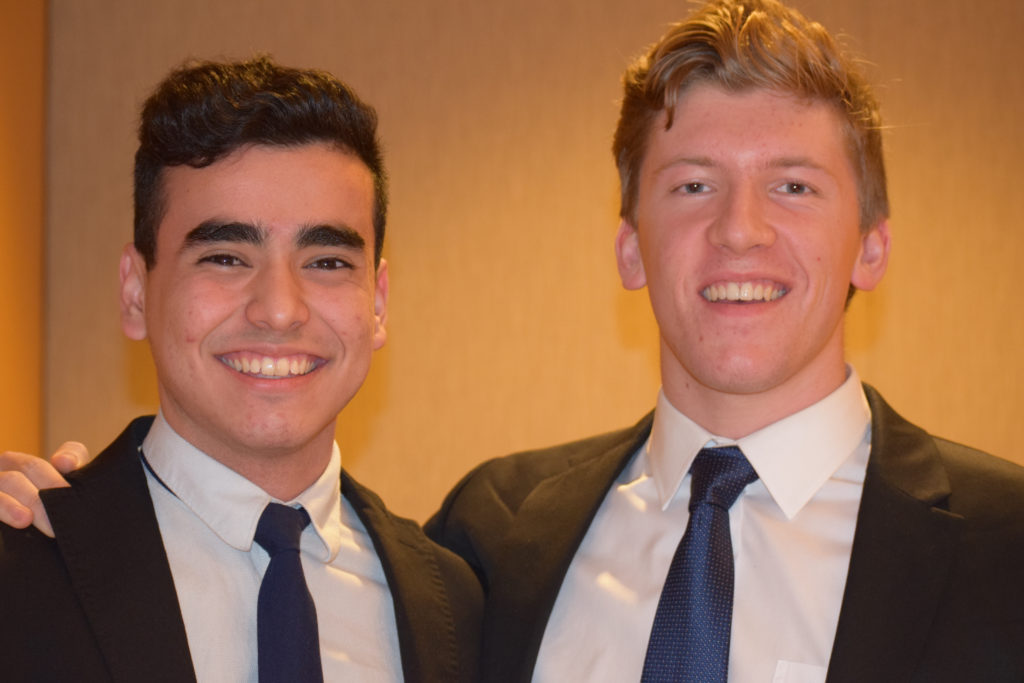 What’s Next for Piercey and Fletcher Following UGBC Election

Following the election of Reed Piercey, MCAS ’19, and Ignacio Fletcher, MCAS ’20, for president and executive vice president of the Undergraduate Government of Boston College on Thursday, the team shared their reactions and thoughts on winning. At press time, Frontis and Sheikh were not able to comment.

2,755 total votes were counted this year, up from 2,431 last year, and 2,592 in 2016. But Frontis and Sheikh were penalized by the Elections Committee for negative campaigning on social media.

“I thought the election could go either way right up until the last moment because of how committed and passionate both teams were,” Piercey said.

He and Fletcher explained that they aim to ensure proper follow through on diversity initiatives, such as DiversityEdu and the Multicultural Learning Experience program at BC. Piercey said they will work toward implementing an LGBTQ+ resource center, as well as “Eagle Exchange,” a physical on-campus location for exchanging clothing, room accessories, and non-academic books at discounted prices.

“We have to put in the work to realize our vision of UGBC with sensitivity to the context on campus and what we’re going through culturally,” he said.

Fletcher discussed the importance of meeting with the Montserrat Office and establishing a seat on the Student Assembly for Montserrat and first-generation students. He and Fletcher plan to begin attending the weekly UGBC executive meetings to aid the transition into their new roles. He will also follow through on the effort to implement the student experience survey to gather information on groups of students that BC has little data on, such as LGBTQ+ students.

“My mentality is that it’s time to work and walk the walk,” Fletcher said.

He and Piercey also expressed the importance of working closely with Frontis and Sheikh in the upcoming year.

“1,204 people voted for Taraun and Aneeb, so it would be unfair for us not to work with them,” Fletcher said. “How can we join forces together to get results?”

He and Piercey commented on the call for an emergency impeachment meeting surrounding Steve DiPietro, MCAS ’19, as well as his subsequent resignation, along with Matt Batsinelas, CSOM ’19, from the Student Assembly. Both of them released statements on Facebook condemning DiPietro’s Facebook comment, which read “Good thing those blm freaks aren’t anywhere near ugbc leadership #staywoke #yacoubian,” and was linked to a Heights article that covered the election results.

“I hope [DiPietro] realizes how wrong he is, because Ignacio and I both want the advocates and members of the opposing team to be as close and as involved in our leadership as we can possibly have them,” Piercey said. “If anyone thinks that we’re not going to take that approach, it’s a misconception.”

In the days before the election, Piercey and Fletcher received negative criticism online regarding their ability to advocate for students on campus who are members of minority and underrepresented groups. He feels that their remarks come from a valid place.

“It was never our intention to make students of color feel underrepresented or not spoken for,” Piercey said. “But it’s hard for me to feel angry or defensive, because it also helps us take a step back and consider where these sentiments are coming from.”

He and Fletcher plan to be active listeners in the upcoming year and make sure that they incorporate all students’ voices into policy decisions and discussions.

Piercey also received criticism because he was absent during the Silence is Still Violence march in October, studying abroad in China. He explained that he stayed as up-to-date as he possibly could while he was gone, but recognizes that it was impossible to understand the exact campus climate.

He recognizes that his voice is not necessarily the one that needs to be heard and believes in the importance of letting other students have the floor when discussing issues of marginalization and advocacy.

“I may not have been on campus for the moment, but I can be present and supportive for the movement that comes in the aftermath,” Piercey said.