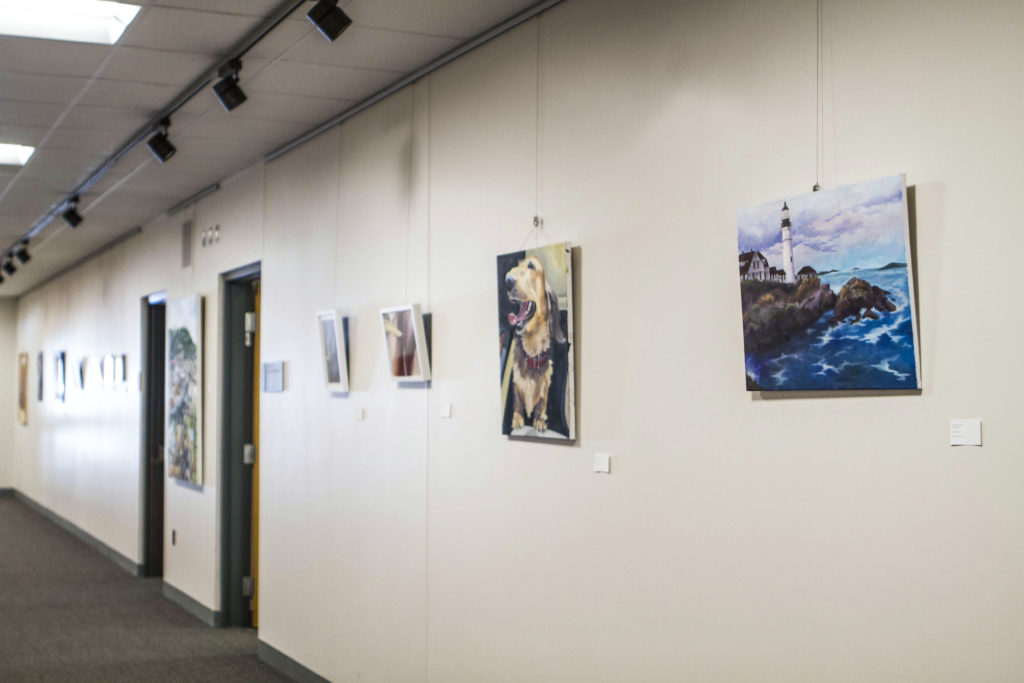 Tucked away in the first floor gallery of Carney Hall, the work of students in Boston College’s Art Club hangs on display. These 13 pieces comprise the entirety of the Art Club’s 2018 Spring Student Art Show. Each piece hangs flat against the wall for viewing two-dimensionally, but there is a variety of mediums present—from photography to painting. The gallery isn’t tied together by a clear theme—aside from the recent creativity of BC students.

Right at the entrance to the gallery, past a clear glass door, is the first work of the Art Club’s display. This piece, titled “HERMXPHRXDYTE” is an oil painting on canvas, surrounded on all sides by a wooden frame. The painting, by Sabel Flynn, CSON ’19, depicts a human figure. This figure stands, backed by large red flowers, alongside a dog. The figure has male genitalia and, on the chest, the artist has accentuated the curve of female breasts. This duality is explained in part by the title, clearly meant to speak to the figure’s nature as a hermaphrodite. The face of the figure does not bely the figure’s sex, clearly painted this way intentionally. Criss-crossing the painting, forming a grid, are thin strings attached on either end to the large wooden frame. In the center, these strings are arranged into the shape of an “X” and a “Y” to show the chromosomes that determine sex. The effect of this joining of painting and thread is quite striking and beautiful. The artwork accentuates the beautiful nature of a person many might consider to be abnormal. In doing so, this painting solidifies itself as one of the more stimulating and interesting pieces in the collection.

Further along the wall—the artwork covers only one wall of the hallway—is a piece called “Spurtle.” This piece, a combination of watercolor and digital print, was created by Emily Zhao, MCAS ’19. It depicts a colorful sea turtle floating in space. On the turtle’s shell, Zhao has painted a stunning and bright half-globe. This is clearly alluding to a planet or other celestial body. The turtle drifts through space, surrounded by the blues, greens, and purples (clear examples of the watercolor aspect of the piece) of the universe. The title, “Spurtle,” is apparently a combination of the “space turtle,” the subject depicted here. While turtles as that which carries worlds through space have been depicted before, Zhao has provided a refreshing take on a classic idea.

In a series of three digital prints hung next to each other, Michaela Mark, MCAS ’21, presents an interesting trichotomy. All three are untitled, but this is where their similarities seem to end. The first print shows a young woman with her head tilted up toward the viewer. Her eyes are closed, and her hair trails out behind her. She appears to be floating on top of water, as parts of her hair seem to be adrift under the surface, while much of her hair and face are dry. Beautifully colorful flowers float on the surface, seeming to get caught in the woman’s long hair. The print conveys a decidedly peaceful feeling of relaxation and drift. The second print is more vibrantly colorful. In the middle of the frame are the bottoms of someone’s feet dusted all over with neon blue and pink colors. As the eye of the viewer moves out from this center, the print becomes less and less focused, as if there was a large distance between the outer edges and center. Mark’s last print is the most realistic of the three. It is also a digital print, but it could easily be mistaken for a photograph. In it, a girl stands, obviously very cold, on a snow-covered bridge. Her hands clutch at her clothing, and her facial expression appears uncomfortable. This print conveys a sense of loneliness and isolation, as the girl stands by herself, the only sign of life, in the snow-covered landscape.

Each of the aforementioned pieces of art are very visually interesting, but they are by no means the best or the only interesting pieces in the gallery. This spring, the Art Club at BC has outdone themselves in this display of artistic creativity. Often, student artwork is overlooked by many BC students as they walk to and from class, or sit and study, but it is galleries like these that give a glimpse into the wealth of artistic talent that exists on campus for those who seek it out. 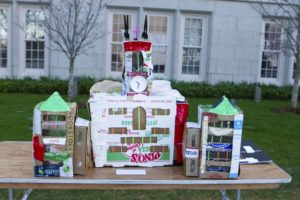 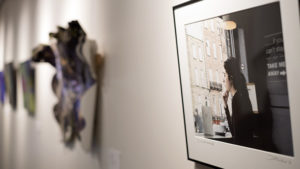