Home » Laughing Medusa, The Music Guild, And The Art Club Share A Date In McElroy 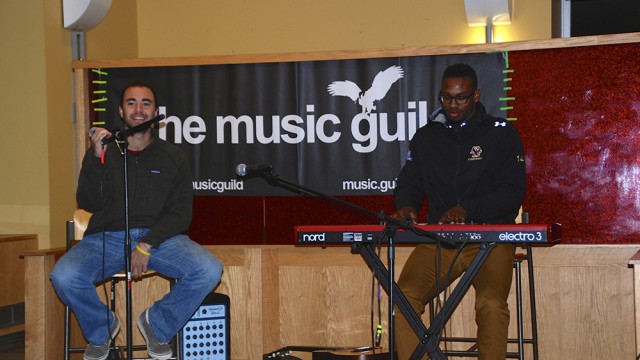 Laughing Medusa, The Music Guild, And The Art Club Share A Date In McElroy

The Yellow Room in Mac turned into a BC hipster’s paradise this past Thursday, as the Music Guild, The Laughing Medusa, and Art Club came together to showcase just what the literary and artistic minds of this campus have to offer.

At the outset, the room was already teeming with a cluster of supporters and a small group of artists ready to take the floor, papers in hand and acoustic guitars strapped to their backs. William Bolton, A&S ’16, was the first artist to perform and he fed off of that anticipatory energy as he delivered a noteworthy performance that set the bar high for the remaining acts. Bolton was one of the few brave souls to perform his own songs, and also one of the few to rap—two distinctions that elevated him from the crowd.

Following Will was budding musician Chris Paterno, A&S ‘17, who followed in Will’s footsteps and played original songs (in his case, “Lover, When You Gonna Come?” and “Your Love”). His sound took a dramatic turn from Will’s—he has the voice of a singer-songwriter, of someone like John Mayer, and puts it to use in folksy selections. A harmonica and harmonized peddle accompanied his guitar, creating a beautiful backdrop to what were, alone, moving lyrics.

As the night wore on, the crowd grew in size as more and more people passed through Mac and found themselves swept up in the performances. The atmosphere felt genuine as peers cheered each other on, offering moral support to those who were nervous and applauding the efforts of all those who were brave enough to share a piece of themselves. Coffee was passed around, a copious amount of sugar was consumed, and people kicked back and enjoyed all the free entertainment.

The good times continued when The Laughing Medusa’s own Kaitlin Astrella, A&S ’16, and Nicola McCafferty, A&S ’17, took the floor to showcase their talents as writers. McCafferty shared a poem with the crowd—one that she’s been working on for the past three years. Entitled “Grounded,” McCafferty’s words took the crowd back to a time when things were simpler and it was okay to be vulnerable. She told the story of intertwined fingers and a single summer night—“Our star-spangled fantasy was bound/by the spine of a single summer night”—and the crowd loved it.

Astrella’s work falls somewhere in vein of fiction—of reverse lawnmowers and tulips. She read an excerpt from one of her short stories. In it, she tells of a man who develops a reverse lawn mower that can produce the most beautiful tulips. His wife loves tulips so she revels in this new discovery, but this soon proves to be to her detriment when her husband accidentally mows over her and she is hence immersed in a bed of flowers. Before he is able to realize what happened, it is already too late and the reverse lawn mower has cranked to a halt. He discovers a wild and voluminous bed of flowers, and can’t seem to find his wife. Quirky, dark, and intriguing, this little story was received strongly by the Mac crowd.

Meghan, LSOE ’16, and Katie Kelleher, CSOM ’18, ended the night on a musical note with another remarkable vocal performance, as they sang a beautiful rendition of “Dreams” by Fleetwood Mac. The two sisters played acoustic guitar and layered their voices on top of one another’s beautifully. After a performance like that, it was clear that these two had won the genetic lottery.

All in all, it was a remarkable night for the arts. The beauty of this event, and other events like it, is that it brought together a broad spectrum of talent—from rap to spoken word, guitar solos to short stories. And, of course, there was free Dunkin.