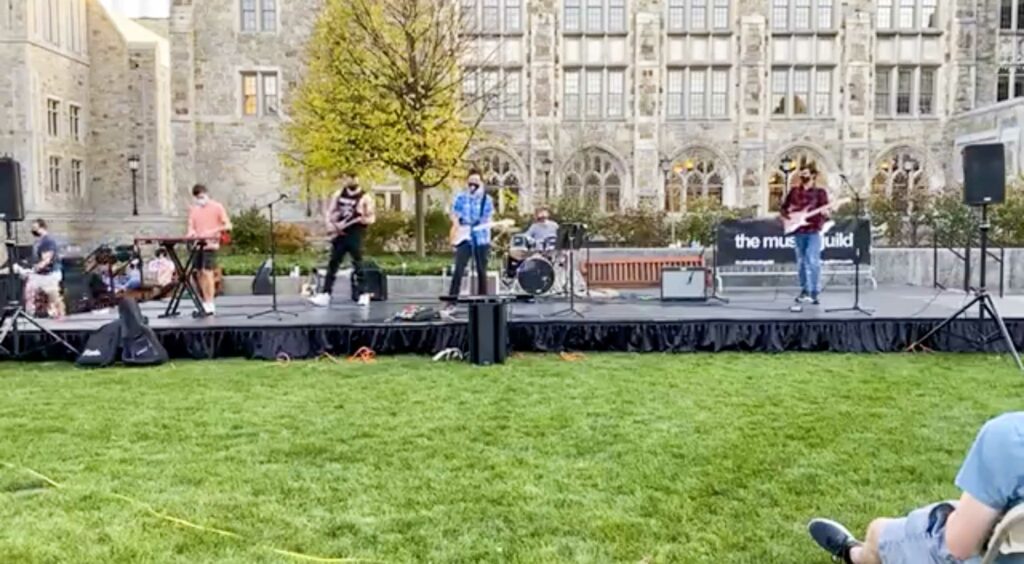 Amid a chorus of guitars being tuned, mics being tapped, and the tolling of Gasson’s bells, the Boston College Music Guild and Campus Activities Board (CAB) teamed up on Saturday to present the Fall Showcase, a live concert featuring student bands and artists.

In a two-act format, five BC musical acts performed to a socially distant audience of about 30 on O’Neill Plaza’s lawn. On a wide stage in front of Devlin Hall, the performers were able to look out into the crowd of friends, family, and fans and become reacquainted with the rush of performing live.

Student band Sleepwalkers opened Act One with a five-song set including guitar-driven covers of The Beatles’ “Come Together” and “Don’t Let Me Down,” as well as Bill Withers’ “Ain’t No Sunshine.” It capped off its performance with two original songs, one called “Movie” and another titled “I Wish.”

Katelyn Ginley, MCAS ’23, followed with a cover of Jack Johnson’s “Upside Down” and two originals titled “Raspberries” and “High School Friends.” Ginley, an E-board member of the Music Guild, found her community working with the Music Guild last year, further fostering her aptitude for performance.

“​Joining the Music Guild club itself and becoming a freshman E-board representative last year helped me make some of my best friends,” Ginley said. “There actually is no better word to describe our E-board than a community. It’s a large board—about 25 people—but it is such an inclusive environment and we all support each other.”

In precedented times, live shows were a common occurrence for the BC Music Guild. Now live shows are few and far between. Matty Hogan, the co-vocalist and guitar player of student band Photo Negative, president of the Music Guild, and CSOM ’22, spoke on the difficulty of actually making the showcase happen this year.

“​Live shows are a big part of what brings life to campus, the way I see it,” Hogan said. “So, campus without live shows definitely isn’t the same. This show is the product of two and a half months of work and meetings I went through, which normally wouldn’t have to happen.”

For the second act of Act Two and the final of the show, Photo Negative opened their 30-minute set with a cover of Drake Bell’s (from Nickelodeon’s Drake & Josh) “I Found a Way,” followed by a cover of The Kinks’ “All Day and All of the Night.”

Next, it played two originals titled “Envy” and “2 AM”—the latter off its 2020 EP A Great Big Hole in the Wall, followed by a cover of Fountains of Wayne’s “Stacy’s Mom” and another original song called “Mess Around.” The five-piece band returned to tracks off its EP to perform “Modset,” and closed the show with a cover of Jet’s “Are You Gonna Be My Girl” followed by its original single “Whatever Floats Your Boat.”

In spite of the restrictions the COVID-19 pandemic has imposed upon the live music industry, the Music Guild is still finding ways to connect students to the arts through writing and performing music. Hogan spoke on the way the Music Guild has provided a sense of community to its members, both pre- and post-COVID-19.

“The Music Guild has been the biggest influence on my BC experience thus far…I love it so much,” Hogan said. “I was welcomed right away my freshman year, instantly as part of the group. From there on out it has been putting on fun events, becoming a better musician, and meeting some of the best people I’ll ever know.”

Screenshot by Grace McPhee / For The Heights

Correction Nov. 12, 9:11 a.m.: A previous version of this article stated that the Sleepwalkers’ final two songs “Movie” and “I Wish” were original songs. They weren’t original songs, rather they were covers. Also, Photo Negative’s song is not called “Envy” but “NBN.”