On Tuesday night, the music department presented an alumni performance in Gasson 100. The three musicians, violinist Grace Ro, BC ’16; cellist Monica Grady, BC ’17; and pianist Alexander Aylward, BC ’17, performed Tchaikovsky’s Piano Trio in A Minor, Op. 50. Through the hour-long performance, they displayed the passion and dedication necessary for a successful musical career.

These performers boast impressive experience both musically and academically. Ro has been playing violin since the age of 7. She performed in the Boston College Chamber Society while studying psychology on the pre-med track. Currently, Ro is attending New Jersey Medical School (NJMS) and directs an acapella group at the school, the NJMS Vocal Chords. Grady began playing cello when she was 9. While pursuing a degree in biochemistry, Grady performed in the BC Symphony Orchestra as first cello, Chamber Society, Cello Ensemble, and Middle Eastern Ensemble. She is now studying at Boston Conservatory for a master’s degree in cello performance and will attend the Chautauqua Institution in Chautauqua, New York this summer on a fellowship. Aylward studied philosophy and classics in the Honors Program at BC. He has furthered his music career at institutions in Cincinnati and around New England. Continuing this commitment, Aylward now performs with the Ars Nova Musicians Orchestra in Buffalo, New York.

The trio was introduced by the assistant chair of the music department, Jeremiah McGrann. Before they began, however, Aylward prefaced the performance with a brief and eloquent explanation of the piece’s conversational nature. “It seems to end on a question with no answer,” he said.

Echoing his words—either because Aylward planted the idea in audience members’ minds or because it was truly that noticeable—short, dialectic exchanges immediately manifested among the instruments as they responded to each other’s expressive phrases in much of the piece. In these sections, as one voice assumed the accompaniment, the remaining two would counter one another in a contrapuntal melody. Although it was often projected distinctly from one instrument, the musicians occasionally played the theme simultaneously with precise cohesion. Each performer displayed great control over their own instrument with distinct dynamics and clear articulation. They maintained such control even as the mood constantly progressed, particularly with key shifts between minor and major. Because of this, their performance exuded distinct sensations in each section, from passion and anger to melancholy and desperation.

The tone was almost always introduced by the piano. As Aylward’s part guided the progression of the piece, he showcased his impressive musicianship with a polished performance. The sections developed, however, to incorporate the other instruments in ways that highlighted each musician’s skill and control. Ro’s violin playing carried much of the melody, displaying emotions from passionate anger to pathetic grief. At times, however, these two voices drowned out the sound of the cello. Still, when Grady played the melody, the piece often took on a sorrowful mood that emanated especially because of the instrument’s human-like tone. Her performance was particularly expressive as her body moved in harmony with the music she played.

The performance otherwise maintained an overall balance among the performers. Ro and Grady demonstrated refined skill on their string instruments with clear vibrato and precise intonation, while Aylward’s even chords, steady scales, and undeterred energy projected clearly throughout the entire performance. The group’s clarity and synchronization indicated that they had rehearsed together often prior to the performance and were comfortable with one another’s playing. With smooth crescendos and decrescendos in addition to consistently controlled articulation, beginnings and ends of phrases were synchronized when the musicians played at the same time, guided only by occasional glances at one another. Their polished performance was obviously the product of many intense individual and collaborated rehearsals—this piece is an immense challenge clearly representative of their musical dedication and talent.

The audience, after a few late arrivals at the beginning, consisted of many students taking notes in addition to parents and professors attentively listening. It was clear, however, through an uncertain pause in between the end of the performance and the final round of applause, that the crowd found difficulty distinguishing the distinct sections of the work. Within the second movement, there are a handful of variations, between which the performers paused. But because the program listed the piece in only two movements, the intended endings were mostly indistinguishable to audience members unfamiliar with the piece

Still, as the piece ended, the violin faded first, followed by the cello, until Aylward’s solitary piano part hauntingly concluded the concert with minor chords that projected a melancholic tone that left the audience tense and uneasy in their seats. 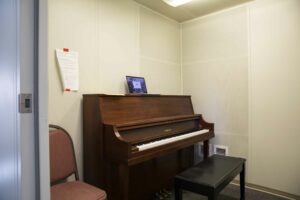 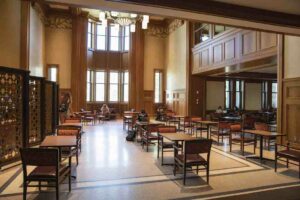