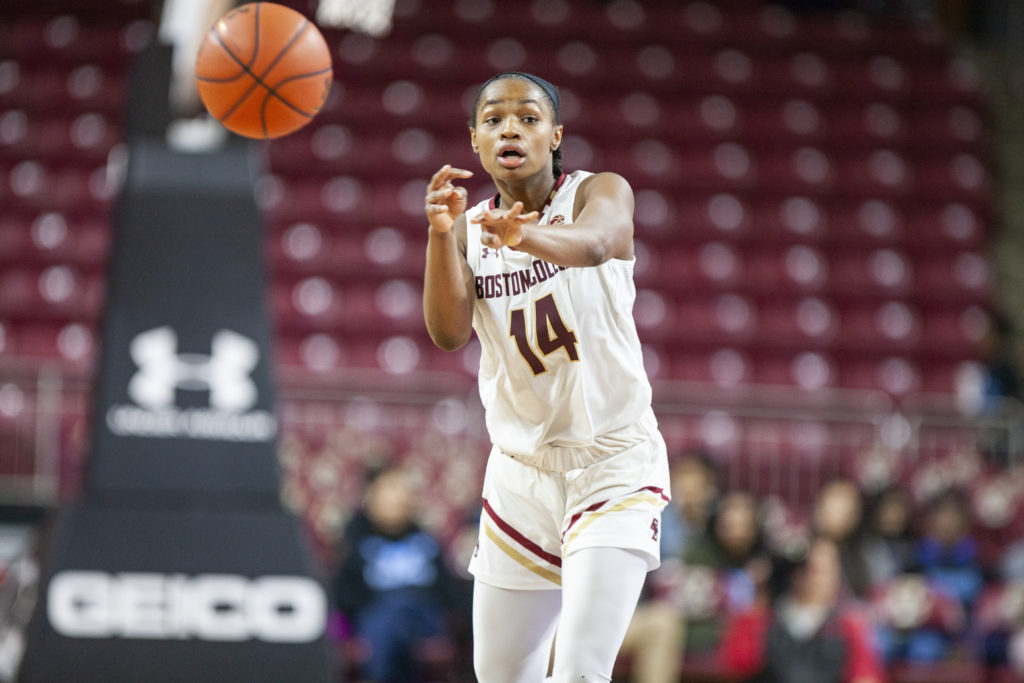 Boston College women’s basketball enjoyed a big mid-week win against Holy Cross, 89-63, pulling away in the second quarter, en route to its third-straight win. The Eagles (3-0) have been playing very well under new head coach Joanna Bernabei-McNamee, but Houston can’t be underestimated. The meeting between the two teams last year was decided by five points in BC’s favor, so the host Cougars will be a tough test. The game has the potential to be an offensive shootout, with the Eagles ranked 15th in scoring offense, while Houston is no slouch at 30th. It’s BC’s first lengthy road trip, having only traveled to nearby Kingston, R.I., this season.

Who is BC playing?
Houston

Where is BC playing?
H&PE Arena, Houston, Texas

How to watch:
The game will be livestreamed on ACC Network Extra and available on WatchESPN.

1) Emma Guy, Makayla Dickens, and Marnelle Garraud are all averaging 14.7 points per game. The combination of Guy’s post presence and Dickens and Garraud’s perimeter shooting has been highly successful—the two freshman guards led the team with 19 points apiece against Holy Cross.

2) The Eagles are averaging 88.7 points per game and are shooting 44.8 percent from the field and 32.6 percent from beyond the arc. While neither of those percentages are particularly high in the national rankings, BC doesn’t hesitate to hoist up shots from distance—it’s fifth in 3-pointers attempted per game.

3) Georgia Pineau is averaging 7.7 rebounds per game, and Guy and Mikayla are close behind with 7.0 per contest. Overall, as a team, the Eagles have a rebound margin of +22, good for eighth in the nation.

2) Houston forced 41 turnovers in its win against Georgia Tech this season, setting a school record. The Cougars boast a +7 turnover margin, forcing 25.3 turnovers per game from their opponents. Harris leads the way with 11 steals in just four games.

3) Houston is averaging 85.2 points per game on the strength of 3-point shooting and its ability to get to the charity stripe. The Cougars, like the Eagles, don’t hesitate to take 3-pointers—they have equaled the Eagles with 115 attempts. Additionally, Houston ranks 18th in the country in free throw attempts and hit at a 63.1 percent clip.

BC and Houston met last season on Nov. 22 at home in Conte Forum, where the Eagles came away with a narrow 79-74 win. Taylor Ortlepp had 21 points and was 10-of-10 from the charity stripe, while Milan Bolden-Morris had 16 points and nine rebounds, just shy of a double-double. BC leads the overall series, 2-1, but this game will be the first matchup in Texas between the two.

The Eagles need to keep up their momentum and continue playing strong. They are dominating the boards and are outrebounding their opponents by a thorough margin. That should be a point of emphasis for BC against Houston, as the host Cougars are 309th in the country in rebound margin (-9.8). If the Eagles can continue to crash the glass and create second-chance opportunities, Houston could quickly find themselves in a game it can’t keep up in. BC could have trouble with the Cougars aggressive defensive style—the Eagles are averaging 17 turnovers per game, which isn’t a good number to carry into a game against a ballhawking defense. Overall, Houston’s not an easy opponent, but BC likely has a slight edge and, if it continues to play strong, the Eagles should have a good chance to get their second win away from home on Sunday afternoon. 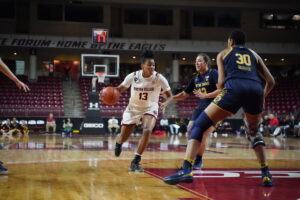