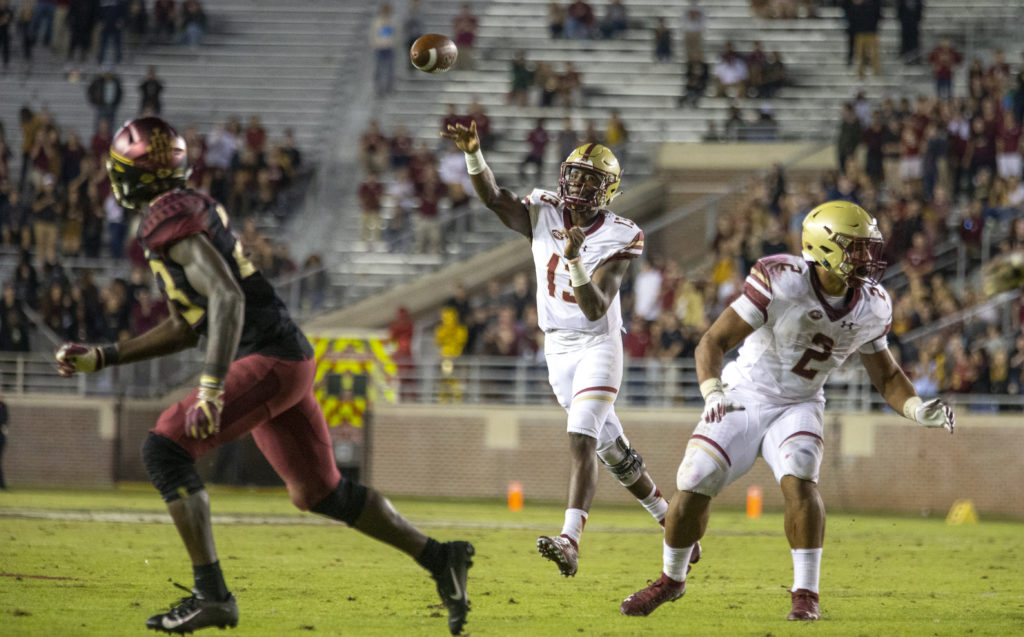 While much of the controversy around Boston College football’s 22-21 loss to Florida State on Saturday afternoon centers around head coach Steve Addazio’s questionable decision to not go for it on fourth-and-1 from the Florida State 45-yard-line with three minutes to go, the game was filled with other notable things—see Anthony Brown’s night-and-day performance, Zach Allen’s soaring NFL draft profile, and a few moves from the Eagles coaching staff that had interesting results.

Allen is already regarded as a late first round or early second round pick in the upcoming NFL Draft, but his performance against the Seminoles will surely see that trend toward the former—if not higher. The 6-foot-5 senior defensive end was a one-man wrecking crew on Saturday afternoon, making the plays he needed to make time and time again. It started on the very first possession of the game, when he got his hand on and blocked Ricky Aguayo’s 45-yard field goal attempt, and continued throughout the rest of the game. FSU’s offensive line knew he was going to be a problem, but its inexperience showed and they committed four false start penalties trying to deal with him and the rest of the pass rush. Three of those penalties came on third downs, too, proving costly for the Seminoles.

He finished with six tackles, one for loss, a sack, and a pass breakup. His most notable sequence of plays was incredibly important for the Eagles, coming at the start of the second half. BC was up, 7-6, and had just failed to convert a fourth-and-3, turning the ball over on the FSU 24—and Allen stepped up when his team needed to avoid losing momentum. On second down, Allen exploded into the backfield for a six-yard sack of FSU quarterback Deondre Francois. After a false start on the Seminoles, Allen knocked down a pass from Francois at the line of scrimmage to force a punt. Overall, he was exactly the player BC needed him to be, and some more.

While much of Brown’s first half left something to be desired, he turned it on the rest of the way. Brown, recovering during the week after a crushing hit in the Clemson game that sent him to the hospital, started to find a flow on BC’s last real drive of the first half. The quarterback completed the Eagles’ first third down conversion, a 21-yard pass to Tommy Sweeney, then found the tight end again for a 16-yard pickup. The tight ends continued to find space, and he connected with Korab Idrizi for 34 yards that set up a touchdown run from A.J. Dillon. He picked up where he left off in the second.

The very first pass attempt in the second went for 42 yards, a good find of Kobay White. That connection would only strengthen the rest of the half, as White went for 121 yards on seven catches and his first 100-plus yard game. After three consecutive incompletions—two that were dropped to the disbelief of the redshirt sophomore signal caller—Brown went 4-for-4 for 62 yards and a touchdown. He had five more throws for double-digit yards, continuing to play the complete polar opposite of his first half. Brown was 8-of-13 for 156 yards and a score in the third quarter alone, and despite throwing three incompletions on the final drive (one was a unexpected drop from Jeff Smith), he turned in a more than respectable line all things considered. He threw for 297 yards and completed 50 percent of his passes, a big turnaround from the 3-for-10 start to the day.

3) Third and Longs and Fourth Down Conversions

The Eagles found themselves with an average third down distance of 8.3, which was far from a plus, but their execution on those third downs was nearly perfect. On third-and-long (9-plus yards) situations, BC went 4-for-6, an impressive conversion rate considering the distance. After going 0-for-6 on third down in the early going, the Eagles went a much better 7-for-13, an impressive mark considering the distance needed. Brown found Sweeney on the aforementioned 3rd-and-10, then also connected with White on three third-and-long situations. Needing distances of 12, 18, and 9 yards for the first, Brown found his classmate for 55 total yards. He would go on to find White in the fourth quarter on a third-and-15 as well.

Outside of Addazio’s questionable decision to not go for it on 4th-and-1 with the game on the line, BC was largely successful on fourth downs. It went 3-for-6, an impressive 50 percent conversion rate. The Eagles converted their first two during a first quarter drive that ultimately ended in a Brown interception, then used a 4th-and-1 conversion in the fourth quarter to set up a crucial touchdown. Up 14-13, Addazio opted to go for it with a yard needed at the FSU 10-yard line. He took a timeout, first, to get his team on the right page. He rolled Brown out, where his quarterback was able to find Michael Walker for a four-yard completion and a much-needed first down.

The first 10 pass attempts from Brown revealed a quarterback who was very out of sync, both with his receivers and in reading pass coverages. He went just 3-of-10 for 12 yards and two interceptions, overthrowing and underthrowing receivers left and right while additionally making poor decisions. Much of the first half was an exercise in futility for the Eagles passing offense and Scot Loeffler even resorted to a pair of trick plays with Jeff Smith passing in an effort to find any success. This wasn’t entirely on Brown—occasionally BC’s receivers seemed to be crowding one space on a given route—but he was far from good in the early going.

The one time early that Brown made the right read—he saw Tommy Sweeney open at the first down marker on a third and long—his pass was batted down at the line. It was that kind of a half from the redshirt sophomore, as he threw a pair of ugly interceptions. The first one, after completing a pass to White for a first down, Brown tried to find Walker on a sideline route. He threw the ball behind the senior, though, and a trailing Hamsah Nasirildeen picked it off. The second was more egregious, however, as Brown stared down Jeff Smith the entire play and FSU’s Stanford Samuels was easily in the right spot to snag the interception. He would start to turn it around the ensuing drive, guiding a 77-yard touchdown drive that featured the team’s first third down conversion and several long completions, but some of BC’s failure to beat a less-superior Seminoles team can be traced to the early offensive struggles.

On the third-to-last play of the third quarter, Dillon came up limping. The Eagles feature back gingerly jogged over to the sideline—a familiar sight to people who’ve tuned in to BC games this season. T plays later, however, Dillon was in the backfield again, and took his 31st carry of the game, running for a gain of two yards through the right side. He would go on to carry the ball six more times before the final whistle, piling up 37 carries. The total was just two shy of his career high of 39 against Louisville last season, but the difference between his performance in both games could not be more stark.

Outside of a few standout carries—his two touchdown runs and a 16-yard run in the first quarter for instance—Dillon was reduced to a shell of how he played against the Cardinals last year. It’s been clear for some time that he is not close to being fully recovered from an injury, even tweeting before the game that it’s “Been six games since I was above 60, don’t worry you’ll see the real me.” The real Dillon—that of 272 rushing yards against Louisville, or his ridiculous 149 yards on six carries against Holy Cross this season—was far from visible against FSU. Remove his longest run, and he averaged under three yards a carry. It was irresponsible of the BC coaching staff to keep pounding the rock with him and not turn to Travis Levy, Ben Glines, or David Bailey, as he was clearly not close to 100 percent—so why use him like he was?

The obvious play to single out is the last offensive snap of the game for FSU. Protecting a five-point lead, BC was tasked with preventing the Seminoles from going 87 yards in two minutes and 45 seconds. After consecutive runs, the first pass from Francois on the drive was an eventual game-winning 74-yard touchdown. The defensive play call was especially questionable, as it isolated Brandon Sebastian—who did have an interception on the game—with Tamorrion Terry, who had already hauled in a 32-yard catch against him earlier in the game. Terry ran a simple route past him and without any safety help, as Will Harris was picking up another streaking wide receiver, caught a good ball from Francois and won the footrace to the end zone.

“We were in quarters press and got beat,” Addazio said, per BCEagles.com.

It was far from the first time in the second half, though, as Francois found success several times He went 3-for-5 for 79 yards in the third quarter, finding Nyqwan Murray on a post for 45 yards before hitting Naseir Upshur for 28 yards on the same drive—one that culminated in a Cam Akers touchdown run. He was largely held in check in the fourth, that is, until the 74-yard breakdown that cost the Eagles the game. Francois completed less than 50 percent of his passes and the pass defense was strong early, but a few missteps in the second half allowed the Seminoles enough room to take the game back.