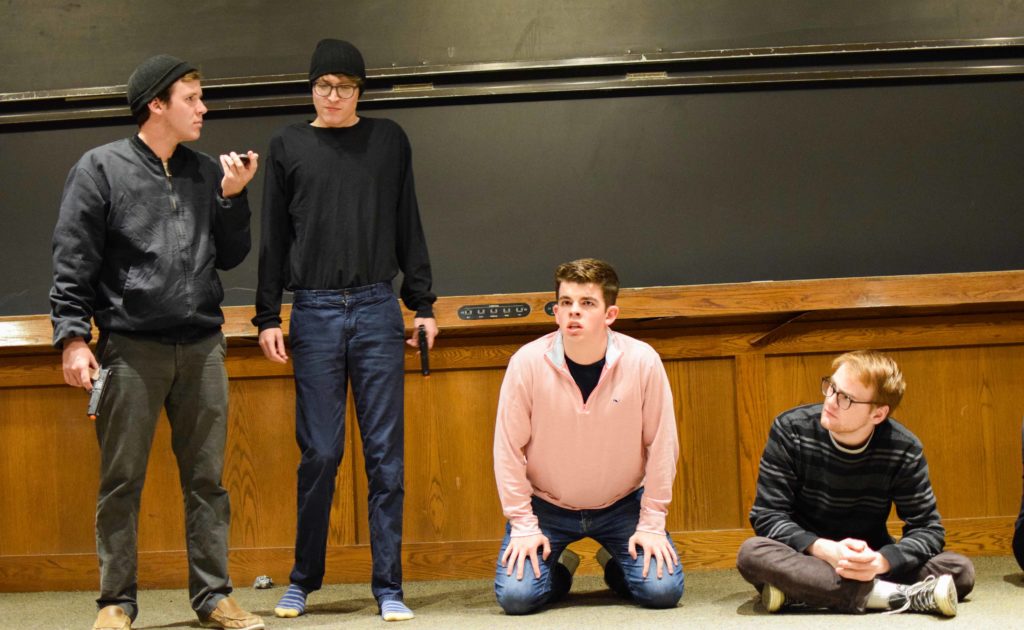 Co-directors Laura Huepenbecker, MCAS ’19, and Rob McCrory, MCAS ’19, took the stage in Fulton 511 to usher in a night of gasps and laughs at Hello…Shovelhead!’s fall show, Hello…Shovelhead! Presents: That Robert Frost Kid. Cannibals, gynecologists, and rhythmic economics teachers were just a few of the characters to make it into the sketch comedy group’s four shows over the weekend.

Shovelhead kicked off the night with a short film about a mystery death in the mods. Two cops (Aba Samaan, MCAS ’19, and Zach Erickson, MCAS ’20) with alternative agendas are tasked with solving the mystery murder. Huepenbecker, McCrory, and Sean McShane, MCAS ’19, act as the lead suspects in the murder of Erin Bucci, MCAS ’19.

The investigation is quickly derailed by the two bumbling cops who seem to be more entertained by each other than the information revealed by the suspects—Samaan and Erickson erupt in laughter when Erickson mutters “discomboobulated” mid-interrogation and share a sensual moment when feeding each other donuts. The cops’ incompetency is not a problem, however, as a plot twist reveals that Bucci faked her own death so she could crack open a cold one at the reservoir in peace.

Shortly after the credits rolled to the sound of laughter from the audience, Huepenbecker assumed the role of a single person looking for love. She took the stage with Matt Wilson, MCAS ’21, for a strange first date, but not just between the two of them: Huepenbecker brought along an urn filled with the ashes of her mother. The dead mother “hugged” Wilson at the end of the skit, at which point Huepenbecker threw the ashes across the stage in the direction of Wilson.

A highlight of the night was the second skit, which centered around a class reunion at the “Harry Truman School for Dumb Characters.” The course included a mute (McCrory) and a friendly cannibal named Joe (Jack Twomey, MCAS ’21). Dana Connolly, LSOE ’22, spent his first show on the stage acting as a too-progressive husband accompanying his wife (Huepenbecker) to her gynecologist appointment, where he greets the gynecologist (Bucci) with “Hillary should have won.”

Jack Tunguz, MCAS ’21, thrived as a hostage-holding criminal in a skit where he demanded cash, a plane, and “a new twist on an old favorite” as a form of compensation from bargaining cops (McCrory and Grace O’Hare, MCAS ’22). Another strong individual performance came from Erickson, who acted as an anxious late-night host. Running from a stage director (Bucci) and timidly asking Elon Musk (McShane)—who revealed his life goal is to “die on mars” during the interview—if he can sit on his lap during the show’s runtime, Erickson brought the perfect combination of nervous energy and childish attitude to the scene.

Employing a diverse cast of characters for the show, Shovelhead encouraged a chorus of laughter in front of chalkboards usually filled with colorless class notes, giving students a lighthearted study break before classes end and finals week ensues. 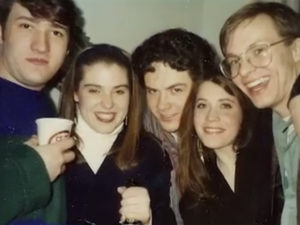