Florida rapper Lil Pump released the highly-anticipated album Harverd Dropout on Friday, and it surpassed expectations. Featuring some of the biggest names in rap alongside several up-and-comers, Lil Pump put together a real album that showed his improvement as an artist.

The album’s first track, “Drop Out,” dips into the rugged underproduction that was a trademark of Lil Pump’s early Soundcloud tracks. A heavy techno beat that is constantly rising and resetting itself is intriguing the first time through, yet it gets repetitive quickly.

“Nu Uh” is the second song, but the first worth listening to. Although the techno beat of the first song is back, Lil Pump brings more lyrical bravado to the second track. Kanye West features on hit track “I Love It,” which sparked headlines when the duo performed it while dressed as Perrier and Fiji water bottles on SNL. Once again, Lil Pump sounds like a real rapper, and although West’s verse is a bit uninspired with the repeated lyric “I’m a sick f—k, I like a quick f—k,” this is one of the most successful songs Lil Pump has released.

On “ION,” Lil Pump has a bouncy sound that gives the track an easy-going ambiance, although the song could have benefited from dragging out Smokepurpp’s verse, a highlight of the track. Lil Pump continues the trend of featuring top-notch artists with “Fasho Fasho,” a track that finds Lil Pump teaming up with Offset. The production outshines Lil Pump on the track with a jolting off-key piano.

The album reaches its peak with the next two songs: “Racks on Racks” and “Off White.” “Racks on Racks” should be the blueprint for every Lil Pump song. Fast and fun, Lil Pump’s lyrics and energy match the production value of the track. “Off White” is a strong follow-up. The lyrics are shockingly deep at one point, as Pump references minority treatment in America, as well as gun violence in a song that will still likely dominate parties for the next six months.

Atrocious production collides with garbage lyrics on “Too Much Ice.” Enlisting a second Migo, Quavo’s verse on “Too Much Ice” falls far short of Offset’s on “Fasho Fasho.” Lil Pump brings back the standard with “Multi Millionaire,” however. The techno beat and fast pace set the stage for Lil Pump, and he executes throughout, with the exception of the chorus—like many others on the album, “Multi Millionaire” quickly becomes repetitive. Lil Uzi Vert brings back his 2016 sound for a nostalgic feature on the track.

If “Racks on Racks” and “Off White” were the two best songs, “Be Like Me” is a very close third. Essentially bringing the same swagger and fun of “I Love It,” “Be Like Me” benefits from the replacement of West’s strange verse with a much more charismatic verse from Lil Wayne.

With features from YG and 2 Chainz—two rappers whose heydays are far in the rearview—“Stripper Name” lacked potential from the start. Although 2 Chainz was better than YG on the track, his overly sexual verse bordered on uncomfortable.

Harverd Dropout stays true to its name: It lacks knowledge. Although the album contains several good songs, its mistakes—repetitiveness and production inconsistency—are glaring and take away from the work as a whole. Considering he is still only 18, there is plenty of room for Lil Pump to re-enroll in the school of rap before fans lose interest. 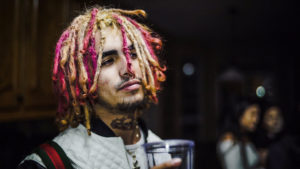