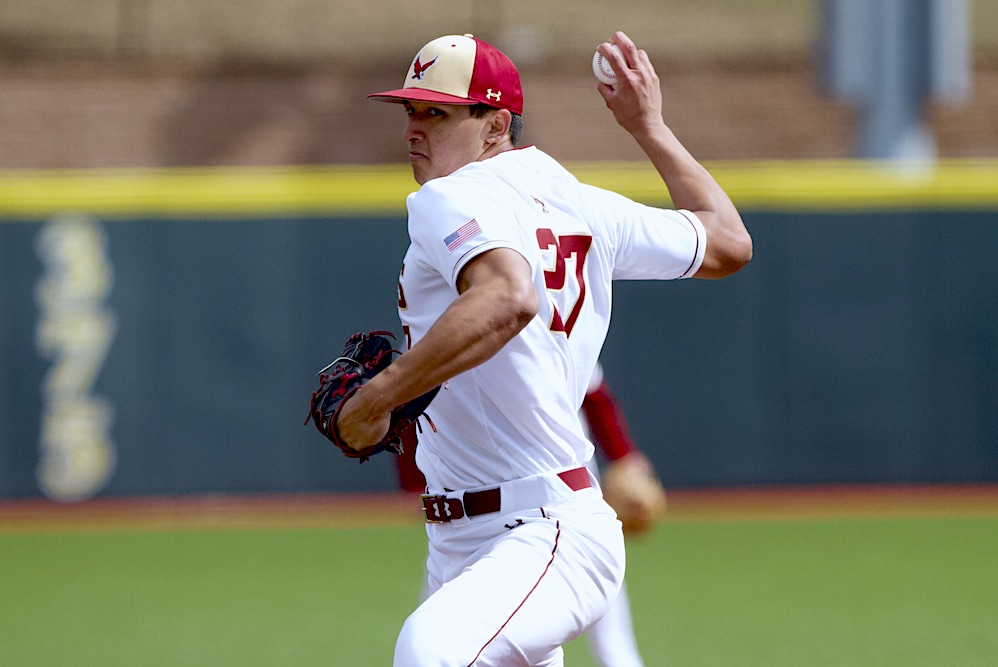 Last season, Boston College baseball left fielder Chris Galland made program history as the first Eagles’ freshman to earn an ACC accolade as prestigious as an All-ACC Third Team nod. This year, with the way Mason Pelio is pitching right now, Galland will very likely have some company. The 6-foot-4 native of San Diego, Calif., is off to an excellent start, and has been making his case as one of the best starting pitchers in the conference.

Through seven starts, Pelio is 4-1 with a 1.64 ERA, and he’s currently on a run of three straight quality starts—a game in which the pitcher completes at least six innings and permits no more than three earned runs. . Remove his two non-conference starts at the beginning of the year—and just consider ACC play, which has featured four top-25 teams thus far—and his numbers are even more impressive. In five starts against conference opponents, the likes of which include No. 3 North Carolina State, No. 21 Florida State, and No. 20 Louisville, Pelio is 3-1 with a 1.36 ERA and is holding opponents to a .143 batting average. That ERA is the second best among starters in league play, with a fellow first-year star in Clemson’s Davis Sharpe holding a slight 20-point edge.

Put simply, Pelio is doing something in his first year on campus that few Eagles have done before. While BC still has 23 games remaining and Pelio will likely pile up five more starts, his current numbers are worth a historical comparison. If you look at BC’s single-season record books for ERA, you’d find that his current 1.64 mark slots in at third—trailing Steve Langone, who set the record as a senior in 2000 at 1.54, and Doug MacNeil, who posted a 1.60 mark in 1989 as a sophomore. If you consider the top 10, you’d find just one freshman: Jacob Stevens (2016).

While it’s hard to forecast what’s ahead, Pelio likely has starts remaining against No. 17 Georgia Tech, No. 21 North Carolina, Duke, Virginia Tech, and Notre Dame. The first two are tough matchups, but the hard part of his schedule is largely over. The Yellow Jackets will be arguably his biggest test on paper, as they boast a .301 batting average in conference play, and the Tar Heels are patient—they lead in ACC play in walks and strike out the the fourth-fewest times per game—but the final three games offer him a chance to finish strong.

His latest start, against a potent Wolfpack lineup that entered averaging 8.6 runs per game—a full run more than second-place Wake Forest—was a prime example of just how good he can be when he’s on. Pelio’s only mistake was a home run surrendered in the fourth on an 0-1 grooved fastball, but otherwise he was effective and had N.C. State hitters struggling. He’d retired eight straight before the home run, then responded by retiring eight more in a row. Pelio set down the last three batters he faced, the final out being a harmless groundout to second base on his 114th pitch of the day.

“He doesn’t look like a freshman out there, does he?” head coach Mike Gambino said after the game. “He loves it. He loves the chance to pitch in a big spotlight. He’s a special one. Moose is going to be really special the next couple years.”

Pelio was described in the team’s announcement of the Class of 2022 as a “great worker” who has the “ball jump out of his hand,” and he hasn’t disappointed. Scouting reports out of high school described the Rancho Bernando H.S. product as someone who “attacks hitters” and is capable of “throwing a lot of strikes as he works to get ahead of hitters with quick tempo.”

Still, this dominance wasn’t necessarily expected—especially after his trial run in the New England-based Futures Collegiate Baseball League this past summer. Playing for the Nashua Silver Knights, Pelio made three tough starts before being moved to the bullpen for his fourth and final appearance of the summer. Facing off against collegiate talent, Pelio never got past the third inning in any of his starts and was tagged for 13 earned runs on 13 hits in just 6 2/3 innings. Still, his lone relief appearance on Aug. 5 offered signs of growth, as he faced one batter over the minimum in two innings of work and registered a strikeout. It’s safe to say now, though, that he was just getting adjusted to the collegiate level.

Now, he’s further developing an arsenal of pitches that has wowed the likes of area scouts. Stu Murray, a college baseball podcaster and editor, was in attendance for his latest start and tweeted that “Mason Pelio looks real.” He clocked the righthander with “dynamic 91-95 mph gas with legit cut” and also was impressed by his feel with his curveball and changeup.

“It all starts with fastball command,” he said. “He changes speeds of his fastball and he can locate both halves of the plate. Then it’s that changeup, curveball, cutter mix. He’s got that cutter now, and that makes him really dangerous.”

Overall, Pelio has helped his team avoid series sweeps against highly-ranked foes and has just two starts—one his first outing with the Eagles—where he failed to make it to the seventh inning. He’s the staff ace and is keeping pace with some of the best individual seasons in program history. The last time BC made a postseason run—back in 2016—it did so on the strength of aces Justin Dunn and Stevens, who combined for a 2.31 ERA across 140 innings of work. With Pelio firmly solidifying his place in that category, the Eagles are halfway to forming a similarly dynamic duo.