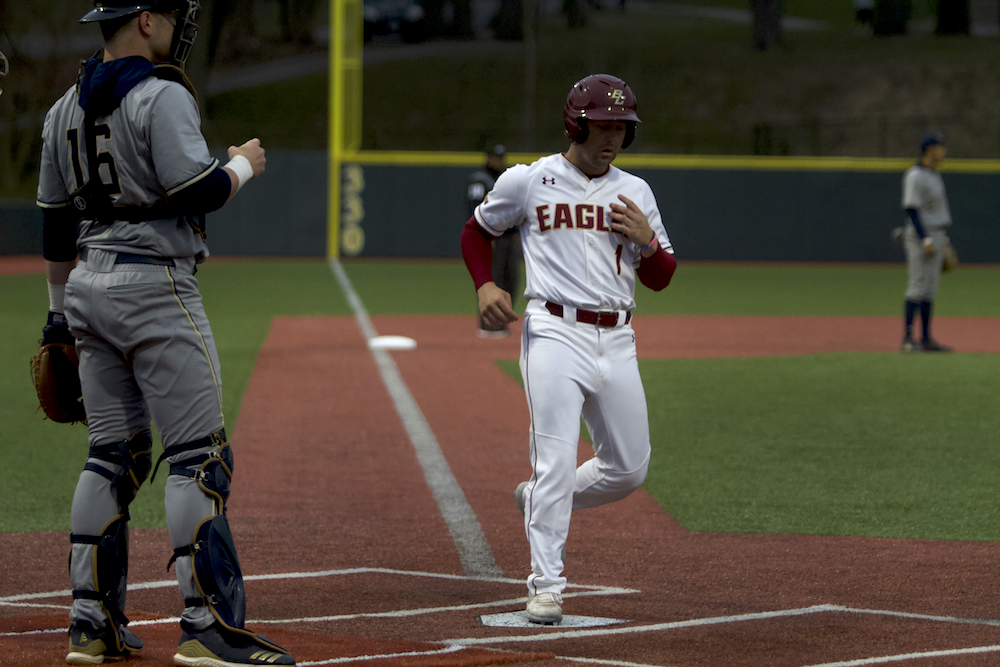 Eagles’ Bats Stay Hot in Win Over No. 17 Georgia Tech

In the bottom of the first inning, Boston College baseball third baseman Jake Alu swung on a 2-2 pitch and sent the ball rolling down the right field line. It just veered fair, and the entire Georgia Tech team paused in a state of confusion before realizing the ball was still in play. Right fielder Baron Radcliff finally went after it, but not before Alu strode into second with a double. Two batters later, Sal Frelick beat out an infield single to bring in Alu, and Alu’s double was the first of a number of plays that bounced the Eagles way, resulting in a comfortable 9-2 win over the No. 17 Yellow Jackets—the team’s sixth ranked victory of the year..

“It wasn’t the coaches doing something special, it was these guys being locked and having really good at-bats,” head coach Mike Gambino said after. “[They’re] doing what we believe they can do.”

BC (18-17, 7-9 Atlantic Coast) southpaw Dan Metzdorf was on his game, spinning a quality start for the third time in as many outings. He went 6 2/3 innings, striking out six—the fifth start in a row reaching that number. It was evident at times that Metzdorf was toying with GT (22-12, 9-7) batters. The middle of the plate was open all day and batters were striking out left and right. Metzdorf would continue to provide clean punchouts throughout the majority of the game, and he only issued two walks while allowing four hits.

He more than outdueled his counterpart in Xzavion Curry, who gave up 11 hits and seven runs—four earned—in five innings of work. Curry entered averaging over a strikeout per inning, but he found it tough to shut down a dynamic BC lineup, which was free swinging and making plenty of contact. He wasn’t backed up by a clean defensive effort, as the Yellow Jackets committed two errors and also couldn’t manufacture much when it was at the plate.

The top of the second was a prime example of the Yellow Jackets’ offensive struggles. Outfielder Carter Hall appeared to reach on a fielder’s choice, as Tristin English was tagged out going to second, but the the ball was sent to first to tag Hall as well. The outfielder looked to be safe, but the double play was completed, due to interference by the runner.

The bottom of the third began with Curry striking out catcher Peter Burns with three straight pitches to the outside corner. The Eagles were not to be deterred, however, and Chris Galland had a huge swing on a 2-2 count to send the ball right over left fielder Luke Waddell’s head. Waddell leapt into the air and watched as the ball went sailing just over the tip of his glove, allowing Galland to get to first. The great hit would shortly be marred by the fact that the Yellow Jackets got their first pickoff of the year on Galland. A scuffle near the base occurred when Galland was just nearly off base and English at first caught the toss from Curry and wrapped himself around Galland’s back to keep from falling in the attempt.

All would be righted by the star of the day in Alu, who finished 3-for-5 with three runs scored out of the leadoff spot. Alu had a huge triple when the ball was sent straight for Radcliff, but it dipped just below his extended glove. It should have been an easy out, but Alu got to third and then scored another run on the day on the very next pitch when Brian Dempsey singled to right field as well. It was a mirror image of the previous play, but this time the ball dropped even shorter to allow for Dempsey’s RBI single and bring the score to 2-0.

The bottom of the fourth was another huge inning for the Eagles. Cunningham singled to right field, further exposing Radcliff, who again could have had another very easy out. Ramon Jimenez then exposed Waddell yet again, who lost the ball right over his head. Jimenez reached second on the double, and Cunningham scored to further extend the lead.

Cody Morissette was then up at bat, and he split two Yellow Jackets, with Waddell scooping up the ball but bobbling it, allowing Morissette to reach safely. Dante Baldelli, in what must have been the best pure baseball play of the day, laid down a perfect sacrifice bunt, bringing Jimenez in.

A very scary play occurred during the top of the fifth. While Galland, who had a tough go of it and finished 1-of-4 at the plate, was chasing a foul ball, he was not looking out for the incoming outfield wall. As he charged toward it with all of his power, his body was rocked on impact. He was able to bounce back up but it definitely took a toll on him. His pain would shortly be alleviated, though, when the Eagles got a clean double play to end the inning.

During the bottom of the fifth, none other than Alu had another incredible hit. He doubled yet again, on a ball that was just nearly fair. Alu would then get home off Frelick’s hit, which perfectly mirrored the nearly foul ball that Alu had just hit. This brought the game to 5-0 and, shortly after, two more Eagles scored when Radcliff lost the ball that dropped right in the middle of him and Nick Wilhite, leaving the Eagles with a healthy seven-run advantage.

The Yellow Jackets finally got on board in the seventh, but they were staring at a crooked number on the scoreboard. Metzdorf was chased after giving up a RBI single to Radcliff, and a fielder’s choice brought in another run, but the BC bullpen was up to par. Thomas Lane finished off the win, going 2 1/3 scoreless innings with five strikeouts while working around three hits.

GT finally turned to its bullpen, but it had different results. Jake Brace took the mound and, on his first pitch, he nearly drilled Dempsey, who then singled to right field. Wilhite leapt after the ball on an extreme dive and slammed his fist into the ground in frustration. He then laid on the ground in anger—his actions summed up the entirety of the game for the Yellow Jackets. Morissette capped the scoring for the hosts with a two-run single, punctuating a decisive victory over a top-25 team.

The win was a big one for the Eagles, who have responded from earlier season setbacks—namely letdowns after previous ranked wins—with a healthy winning streak. BC has won four straight, including another win over then-No. 3 North Carolina State, and the offense is firing on all cylinders. It’s scored 20 runs in the last two games combined, but has also proven it can win pitching duels, taking 3-1 and 4-0 decisions in the two before that. This team has shown flashes of potential throughout this season, and the chance to take a series against a top-20 team reflects that.

Notre Dame Brings Women’s Tennis Back to Earth With Comfortable Win
Saturday Starter Struggles Plague BC in Loss to No. 17 Georgia Tech