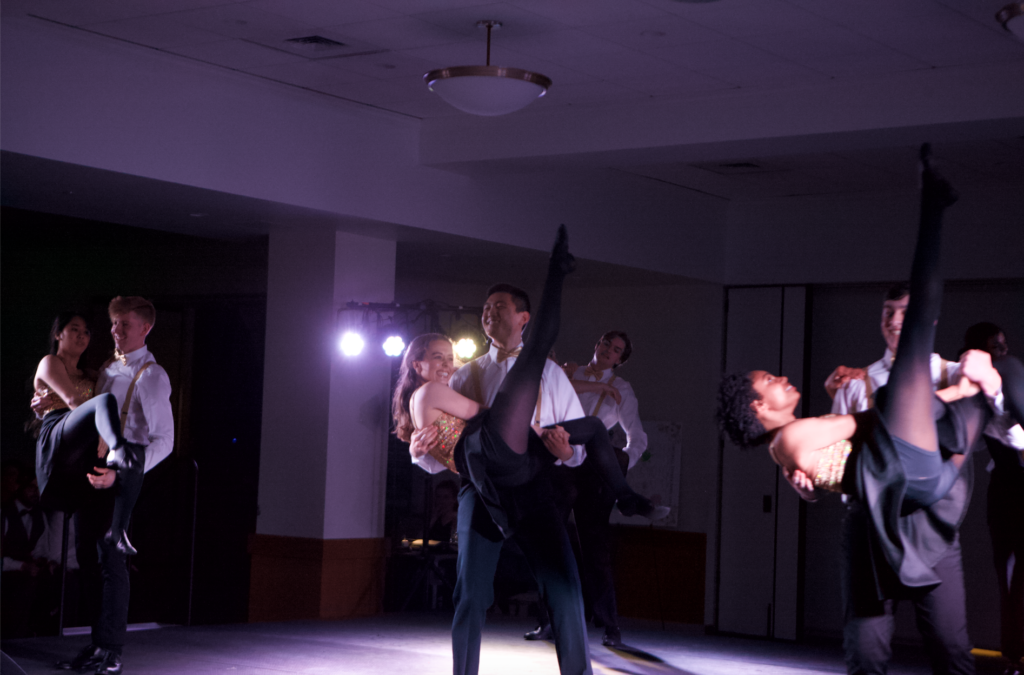 A bunch of 20-something-year-olds swing dancing in a dining hall that used to be a bar is a spectacle to behold, and at least part of the reason Full Swing, Boston College’s swing dance group, was able to dub its spring show on Friday the ‘Swing Spectacular.’

Jason Rothstein, current president of Full Swing and CSOM ’19, kicked off the event by informing the packed Rat that $1 from every ticket sale would be donated to the American Cancer Society. Rothstein also lamented his amazement at the group’s recent achievements, which include hosting its first Swing café in collaboration with the Campus Activities Board (CAB) and BC bOp!—a jazz ensemble on campus—during the fall semester, as well as competing in Showdown on March 31.

“I think it’s safe to say Full Swing is back on the map where it belongs in this Boston College community,” Rothstein said.

Green light flooded the stage as the sound of waves crashing against a shore filled the room before dancers took the stage for a Great Gatsby-themed routine titled “A Little Party Never Killed Nobody,” set to the song of the same name by Fergie, Q-Tip, and GoonRock. True to the theme, the female dancers donned shimmering flapper dresses that shone like fireworks across the stage as their male counterparts, who wore cheeky suspenders, lifted them in various formations. The crowd clapped along to the beat before the music cut and a fedora-wearing dancer ran to the front of the stage to shoot Gatsby with a fake gun.

An all-girl choreographed dance set to MisterWives’ “Not Your Way” followed. Prefaced by an explanation that the club often attracts many more female dancers than male dancers, three dancers took the stage to prove that they didn’t need male partners to put on a dazzling display of tricky partner work. The female dancers came together on center stage for a Rockette-style kick line.

Full Swing welcomed Boston College Irish Dance (BCID), which took second place in the competition category at this year’s Showdown, for a fiesty collaboration set to Florence + The Machine’s “Kiss With a Fist.” Lighthearted laughter erupted in the crowd when some of Full Swing’s members tried their hand, or feet rather, at Irish dance. The routine took on a theme of female-empowerment when it culminated with the female dancers kicking their male partners to the ground and physically lifting each other up.

Full Swing rounded out the event with two final original routines set to Lou Bega’s “Mambo No. 5” and Bruno Mars’ “Treasure.” Female dancers elicited screams from the crowd when they shimmied down to the ground in front of their male partners, but the group of dancers more than backed up their more risqué moves with fancy and fast footwork.

Schettino described the final routine as having “classy and sexy choreography” before the dancers took the stage. Rotating lifts evoked screams from the crowd before the male dancers dipped the girls during the routine’s sultry breakdown. For one last spectacle, the male dancers showed off their strength with a move that entailed swinging their female partners around by their arms and legs, their faces just inches from the ground.

Featured Image by Bridget Clark / For The Heights

showdown full swing
‘The Silence’ Shakily Follows in Footsteps of ‘A Quiet Place’
Eagles Swept for First Time at No. 12 UNC 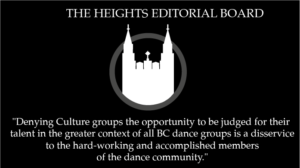