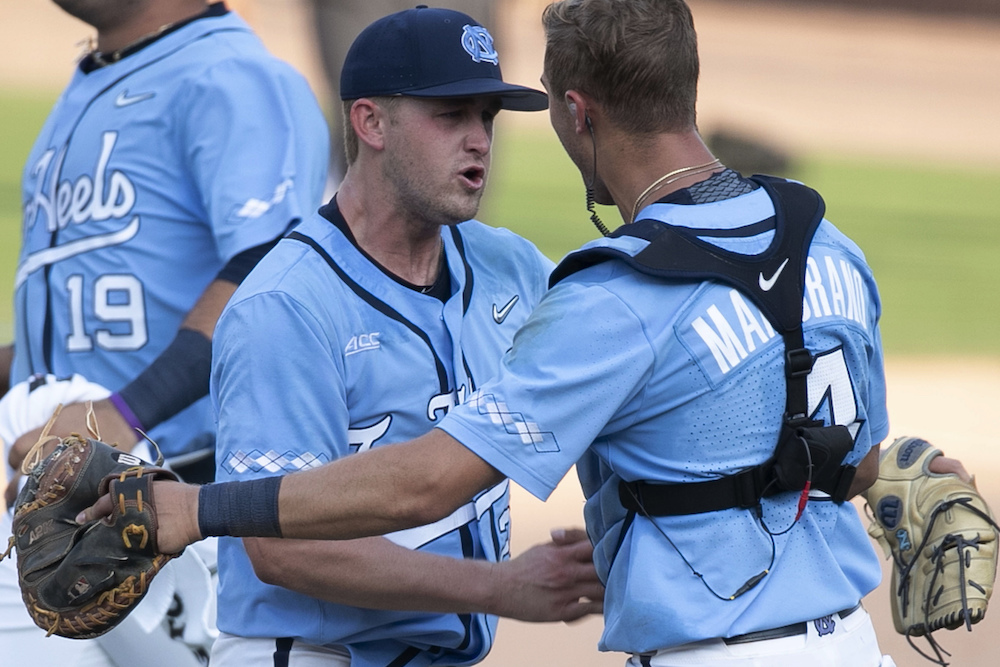 For a bit, there was hope. Boston College baseball trailed North Carolina, 7-1, heading into the sixth inning of Saturday afternoon’s ACC Championship semifinals. The Eagles’ bats woke up in that frame, though, striking for four runs—kickstarted by a solo shot from Jack Cunningham—on six hits in the inning alone. Suddenly losing by just two runs, there was momentum and a chance that BC could continue to call its way back.

Head coach Mike Gambino turned to his reliable senior reliever Thomas Lane in the sixth, aiming to hold the Tar Heels off the board after they struck for three in the previous frame, but it wasn’t in the cards. UNC’s formidable offense—which had the leadoff runner reach in each and every frame—struck for three more against the likes of Lane and reliever Matt Gill, extending what became an insurmountable lead en route to a comfortable 13-5 victory.

The Tar Heels (41-17, 17-13 Atlantic Coast) racked up 13 hits and worked their way through seven BC (31-27, 12-18) pitchers over the course of the four-hour game. First baseman Michael Busch reached base five times, going 4-for-5 with four runs and a two-run home run, and he was one of four UNC hitters to register a multi-hit game. After watching a comfortable six-run lead slip back to two, Busch led off the sixth with a single and was the first of six straight Tar Heels to reach in the frame.

That three-run sixth put enough distance between the two teams, as UNC’s bullpen rose to the occasion. Josh Dotson was chased with the bases loaded in the seventh, but the duo of Hansen Butler and Andrew Grogan closed the door on the Eagles’ run in the tournament. Butler got a lineout to preserve the five-run lead, set down the side in order in the eighth, and Grogan worked around a two-out single with a pair of strikeouts in the ninth.

While BC reliever Michael Marzonie turned in an inspired effort. He entered with the bases loaded and nobody out and got three quick outs to send the game to the seventh. However, he was still eventually chased in the eighth. After leaving two runners on in the seventh, Marzonie gave up an RBI single to Dylan Harris before Busch homered over the wall in left field to cap off an explosive day at the plate.

The final score wasn’t a good indication of just how close the game was in the early going, though. Eagles starter John Witkowski walked the first two batters he faced and both scored—via a Danny Serretti groundout and an Ike Freeman single—but BC quickly answered. In the top of the second, Cunningham was hit by a pitch, stole second, and eventually scored on an RBI single from Peter Burns.

The Tar Heels would get to Witkowski again in the third, though, forcing Gambino’s hand. Busch doubled to right and Aaron Sabato singled to start the inning, and freshman Emmet Sheehan trotted out of the bullpen. He almost immediately hurled a wild pitch to bring in a run, then walked both batters he faced before turning the ball over to Joey Walsh. The redshirt sophomore gave up a run on an Ashton McGee sacrifice fly, but got two quick outs after to keep the Eagles within three.

That set up the most controversial call of the tournament. BC got to the UNC bullpen, as starter Will Sandy exited with runners on first and third—Gian Martellini doubled and Joe Suozzi singled—and Caden O’Brien entered. O’Brien got Galland to fly out to Busch in foul territory, and he alertly threw home. Suozzi saw his opportunity and sprinted to second, where he beat the throw, and Martellini took off for the plate. Serretti, the shortstop, threw back to UNC catcher Brandon Martorano, who attempted to make a lunging tag of Martellini. The umpires ruled the Eagles’ catcher safe but it went under review, and although there didn’t appear to be conclusive evidence to suggest otherwise, he was ruled out. It was a momentum killing double play for BC, and UNC pounced on it.

Two innings later, in the fifth, Walsh quickly ran into trouble. With two outs and the bases loaded—via a single, fielders choice, and walk—the Tar Heels’ number nine hitter Dallas Tessar stepped to the plate. He entered the day with just two RBIs to his name, but laced a single through the left side. An overeager Chris Galland in left tried to do too much at once and muffed the ball, allowing Tessar to trot into second having cleared the bases and given the Tar Heels a 7-1 lead.

For a lot of teams, that might’ve been the dagger. A questionable call going against you followed by a three-run inning is a lot to overcome, but Cunningham led a furious BC charge. He homered down the right field line off of O’Brien with one out, and that sparked a run from the Eagles. Martellini and Suozzi both singled to bring in Dotson, but the hits kept coming. Galland singled to load the bases, then Burns brought in a run with a groundout. Dante Baldelli and Alu followed with RBI singles, and while BC would leave two runners on, it seemed like it’d gained its momentum back as it trailed by just two.

That proved to be false hope, though, as Busch and the Tar Heels answered with three runs of their own. The Eagles would threaten at times the rest of the way, but the bullpen’s inability to put scoreless innings on the board was too much to overcome. BC walked nine batters and allowed 13 hits on the day, far from the recipe for success, and it likely saw the end of its season in a disappointing manner.

Still, the run was nothing short of impressive. BC was the lowest seed in the tournament, but through five and a half innings on Saturday, it was hanging with another highly-regarded opponent with a shot at the ACC Championship. The Eagles closed the year with wins in nine of their last 12 games and managed to do so without All-ACC Second Team selection Sal Frelick anchoring the lineup. There’s been a lot of youthful talent on display that will step up in lieu of the likes of Dempsey, Alu, Martellini, and Dan Metzdorf, and that bodes well for another run next year under Gambino’s watchful eye.