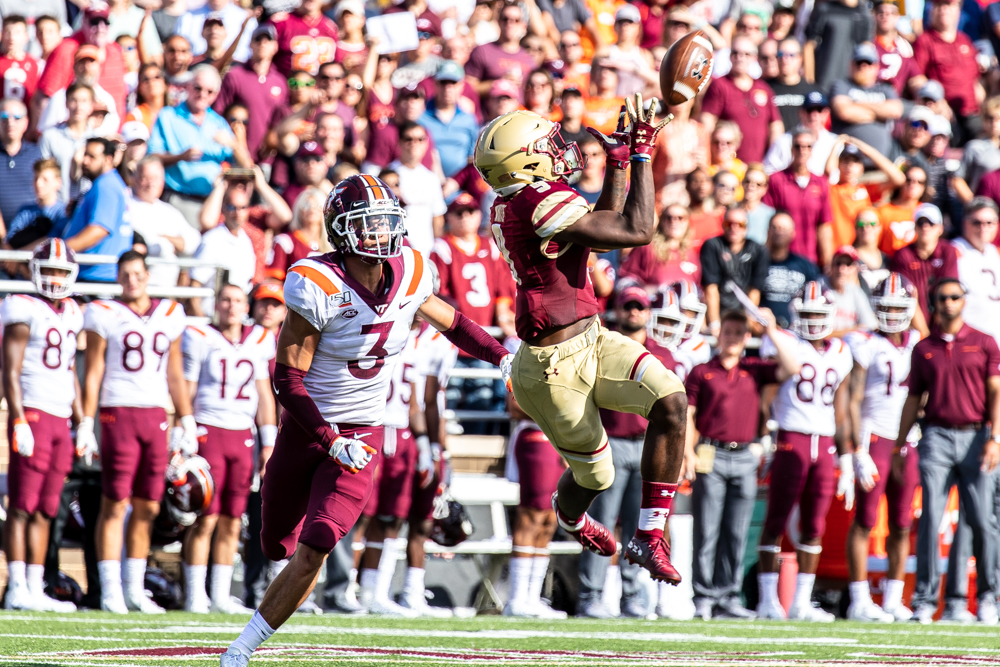 In the fourth quarter of Saturday afternoon’s season opener against Virginia Tech, Boston College football found itself in a pivotal moment. Protecting a seven-point lead, the Eagles’ defense had just stopped a Hokies offense, and BC was desperate to reverse the fortunes of its previous four drives since the half—which had ended in three punts and a turnover.

Ten plays, nine runs, and 56 yards later, sophomore running back David Bailey was powering his way into the end zone for a one-yard touchdown run. It was just enough insurance, as the Eagles outlasted the visiting Hokies, 35-28, to start 2019 in the win column and claim their first ACC season-opening victory since 2007.

“So to me, it’s a statement game because, A, we’re 1-0,” head coach Steve Addazio said. “B, we got a conference win. And, C, we got battle tested out here against a really quality football team and a really, really quality defensive football team. So that’s what I’m excited about.”

Eagles (1-0, 1-0 Atlantic Coast) quarterback Anthony Brown threw for 275 yards and two touchdowns while running for another, and BC piled up 28 points and 356 yards in the first half alone. The early push was enough to offset a tough third quarter in which the Eagles totaled zero yards, while the defense came away from the game with four total turnovers in support.

The Hokies (0-1, 0-1) grappled with injuries and inconsistency throughout. Along with several gutsy scrambles, quarterback Ryan Willis racked up 344 yards and four touchdowns in the air, but he also threw two interceptions—two in the red zone. With star wide receiver Damon Hazelton out, Willis scattered his targets, and five players caught at least four passes. Virginia Tech’s run game was practically nonexistent, though, as the team finished with 98 yards and a measly 2.3 yards per carry.

BC didn’t get off to a promising start, as it went three-and-out right off the bat, but it quickly picked up the pace. On the second drive of the game, Brown rolled out and launched a deep ball to true freshman wide receiver Zay Flowers, who hauled it in for a 33-yard touchdown. It was the first of two lengthy receptions for Flowers, who finished with 116 all-purpose yards.

“It felt unreal at first, but after that first run, A.B. (Anthony Brown)  just told me to play my game after that, and that’s what I did,” Flowers said. “For now, I’m just going to keep doing what I’m doing and working hard, listening to my coach, let A.B. teach me new things, and keep grinding.”

BC’s new kicker Aaron Boumerhi, a transfer from Temple, would miss a field goal on the ensuing possession, and that prompted an answer from the visitors. Virginia Tech’s Hezekiah Grimsley took advantage of a busted coverage, running past Tate Haynes and Nolan Borgersen and catching a perfectly-placed Willis throw for a 55-yard touchdown.

In the second quarter, the Hokies took their first and only lead of the game. It was the product of a prolific passing stretch from Willis, who completed 5-of-6 passes on a nine-play, 88-yard drive that was capped with a 20-yard reception for Tayvion Robinson.

But the Eagles answered. Brown settled in the pocket and found Hunter Long for a trio of double-digit gains, and that set up A.J. Dillon. He’d largely been quiet—totaling 11 carries for 28 yards to this point—against a nine-man box that Virginia Tech was using. He finally got free, though, spinning out of a crowded middle and waltzing 17 yards for his first score of the game.

BC took the lead for good, less than two minutes later after the defense came away with a huge play. Haynes came flying in on a cornerback blitz and strip sacked Willis, and teammate Marcus Valdez was right there to fall on it. Two plays later, Brown found Kobay White on a fade to the left sideline and the junior wide receiver made a phenomenal catch that stood up on review.

The Eagles took advantage of another turnover near the end of the half, stretching their lead to 28-14 after a botched punt. With two minutes left on the clock, Brown opted to keep it himself on a zone read with Dillon and had more than enough space to score from 28 yards out.

The third quarter was drastically different for BC’s offense, though. Even with two of the Hokies’ defensive starters out with injuries, the Eagles couldn’t manufacture anything and finished without a yard to their ledger in the 15 minutes. They only had the ball for three minutes, and Virginia Tech made the most of its extended possession: Willis connected with James Mitchell for an 11-yard touchdown.

Back within a score, it seemed like Virginia Tech had a chance to even it up—and the Eagles weren’t taking advantage of mistakes. Tanner Karafa made a diving interception of Willis to stop a potential drive, but BC promptly gave the ball right back when a trick play with White as the passer went wrong. White, throwing off his back foot, hurled an interception. The Hokies ended up punting, however, and the next drive was finished off with Bailey’s eventual game-winning touchdown.

That’s not to say the drama was over. Virginia Tech embarked on a lengthy 83-yard drive that took over five minutes and featured not one, but two fourth-down conversions—both by Willis, the durable and tough senior quarterback. Willis eventually found Kaleb Smith with a little over two minutes on the clock, but the Hokies didn’t leave enough time. On the ensuing drive, Dillon converted a massive 3rd-and-9 with a bruising 11-yard run, and the rest was history.

“Virginia Tech played a great game, and they’re tough competitors, but it’s a huge win for us, and it’s a statement win for us,” Karafa said. “We’re going to try to take that momentum going forward. That’s definitely the best opener I feel like I’ve been a part of.”

All things considered, it was a statement win for the Eagles. With seven first-time starters—and five on the defensive side of the ball—BC rose to the occasion. Much was made in the offseason about the inexperience on the defense and while the unit did make mistakes, it forced four turnovers and largely impressed against a talented Virginia Tech team.

“It was a battle, as you all saw,” said Addazio. “Really proud of our defense, man. Five turnovers. We held them to under 100 yards rushing, [and] played a bunch of new faces out there.”

The ability to close out a game is one of the harder things to learn, too, and the Eagles were able to even after stumbling out of halftime. The path gets easier, as BC begins a stretch of three straight games against opponents coming off of shaky 2018 campaigns. This might very well be the biggest opening win in Addazio’s tenure, as it showcased a talented team that has plenty of room to grow, especially with a potential 4-0 start ahead of them.