Vampire Weekend opened its Sept. 3 set at Agganis Arena with “Ladies of Cambridge,” a deep cut that hasn’t always made the setlist on the band’s Father of the Bride tour. But after the band’s six-year hiatus from performing in Boston, the song—which happens to be the first song the band ever recorded and released—was a warm introduction for an arena filled with fans whose devotion clearly stood the test of time.

Appeals to the unruly pride of New Englanders were plentiful during the set, but they weren’t contrived: Dancing along to the breezy bongo beat of “Cape Cod Kwassa Kwassa” and rounding out the night with a climactic showing of “Walcott,” the crowd received the Columbia University alumni as if they had spent their college years down the road in Cambridge.

“To this day sometimes—even in other countries—people think we’re from Massachusetts,” Ezra Koenig, the band’s stately frontman, told the crowd.

Koenig toggled effortlessly between bouts of warm charisma and theatrical seriousness. The singer graciously indulged a fan’s request for the formidable—and frankly unperformable—“Hudson” before joking that the band would have to “work on it” after attempting the first verse.

Vampire Weekend also revived “Arrows” and “M79” after they were requested by individual fans, who Koenig called upon during the encore. Earlier in the set, the singer let loose for an extended guitar face-off with touring guitarist Brian Robert Jones during “Sunflower,” which broke into a “Seven Nation Army”-style chant that cemented Vampire Weekend’s status as a premier guitar band.

But really, Vampire Weekend is an everything band. Following the harpsichord-heavy Victorian instrumentals that played after the opener’s set, a breeze of preppy pomp swept through the arena for the performance. The band exhibited its musical breadth with zippy keyboard progression changes in “Diplomat’s Son” and a bongo-synth hybrid breakdown during “Sympathy.”

Vampire Weekend’s catalog, although marked by contemplative brooding, lends itself to lively performances. Fans screamed the lyrics to “A-Punk” and danced along to “Unbelievers,” a song that’s upbeat tempo belies its existential questions. With conviction seething through every lyric, Koenig and Co. created an environment comfortable enough for a choir of strangers to scream “I don’t wanna live like this / But I don’t wanna die” in unison during “Harmony Hall.” Vampire Weekend made what often sounds heavy through headphones feel trivial for a night.

When I first read Mike Powell’s 8.0 Pitchfork review of Father of the Bride in May, I was jarred by the comparison of Vampire Weekend to Phish. Phish is an ’80s jam band known for garish instrumentals and its inexplicably cultish fanbase, while Vampire Weekend is a band of Ivy League-educated millenials who romanticize Peter Gabriel and dignified ottoman couches over harpsichord and violin flourishes. In other words, Phish is a warm tuna fish sandwich from a deli with a B rating, and Vampire Weekend is a hearty sweetgreen salad. At the band’s Agganis show, however, I began to understand the offbeat comparison.

Watching Vampire Weekend perform is like watching Phish—or the Grateful Dead, for that matter—in that the fans are surprisingly devoted. When you go to a concert, you expect fans to sing along to the songs with the punchy chrouses: the “Diane Young”-s and “Oxford Comma”-s of the world. People who pay money for concert tickets are people who know the words to the songs.

Even so, bearing witness to a room of thousands reciting a clunky string of city names that include “Mechanicsburg, Anchorage, and Dar es Salaam” during the first verse of “Step” was both wonderful and eerie. Vampire Weekend lyrics tend to be a mouthful, but Boston fans proved they were up to the task of sinking their teeth in for a few hours. 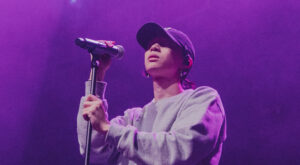