In Week 1, Boston College football’s offense was downright explosive in the first half. The Eagles scored 28 points in the opening two quarters, paving the way for a big win over Virginia Tech to open the season. In Week 2, the Eagles once again looked like they couldn’t be stopped at the beginning of the game. Against an opponent in Richmond that, granted, is nowhere near the Hokies’ talent level, the Eagles scored not four, but five touchdowns in the first half, and cruised from there, moving to 2-0 with a 45-13 victory that was largely problem-free. Here are some thoughts from the easy win.

Dillon out of the Backfield

Coming out of training camp, BC offensive coordinator Mike Bajakian mentioned that the Eagles would like to get AJ Dillon more involved in the passing game. When asked about the opportunity to give Dillon more touches through the air, Bajakian said “I think the philosophy is always the more ways you can get your playmakers the ball, [you] find ways to do it,” he said. “AJ is obviously one of the playmakers. The more different ways we can get him the ball and get him involved, the better.”

Through two games this season, Bajakian has certainly kept true to his word. Dillon caught just one pass in Week 1 against Virginia Tech, but certainly flashed as a receiver on Saturday. First, he caught a screen pass from Anthony Brown before smoothly turning upfield for a 12-yard gain and a first down. Then, early in the second quarter he ran a simple out route into the flat, nabbing another Brown throw before swinging his body around and tiptoeing along the sideline for a 42-yard touchdown. Certainly, expecting Dillon to start churning out 40-yard touchdowns on a regular basis is unrealistic, but getting him even one or two catches per game makes the Eagles a lot more unpredictable on offense. It also gives Dillon the opportunity to use his strength and dynamism in new ways, and against defensive backs, rather than linebackers.

After Bailey carries the ball four times in a row and picks up a pair of first downs, Brown rolls out and finds Dillon for a 42-yard touchdown.

Perhaps most importantly, it seems Dillon is fully engaged with developing his role in the passing game. “His confidence is just through the roof,” quarterback Anthony Brown said when asked about Dillon’s development catching the ball. “He feels like he can catch anything. He’s actually asking for passing plays now.”

Back to the Ground

Last weekend, BC struggled to open holes on the ground against the Hokies for most of the afternoon. The matchup with Richmond, an FCS opponent, offered the Eagles the chance to work on run blocking, and build some confidence in their running game, and it certainly worked. BC finished the game with 346 yards on 50 carries as a team, and gained those yards in every way possible. Dillon (17 carries for 86 yards) and David Bailey (13 carries for 97 yards) both picked up tough yards up the middle and on the edges, and when BC needed to stretch the defense, it turned to Zay Flowers, the dynamic true freshman.

Flowers again demonstrated his athletic ability on the jet sweep, recording a total of 92 yards on three carries, and taking one of his touches all the way to the house for a 46-yard touchdown. The freshman also displayed impressive patience on his runs, waiting for blocks to develop. Even Patrick Garwo—a freshman who was a four-star recruit out of high school—contributed, logging 28 yards on four fourth-quarter rushes.

First touch of the game for Zay Flowers? A 46-yard touchdown on a jet sweep around the right side. This freshman is something else.

The amount of depth BC has in the tight end room is well-documented and was on full display against the Spiders. First it was Korab Idrizi. The senior opened up a big hole with a great block on Flowers’ 46-yard touchdown and caught a seven-yard touchdown pass in the first quarter off an Anthony Brown rollout. Then, it was Jake Burt, who got open across the middle on a play-action pass and dove across the goalline for a 55-yard touchdown reception. Chris Garrison also got involved, making an 11-yard grab on a deep out route.

After Brown scrambles for a first down on 3rd-and-8, he finds an uncovered Jake Burt for a 55-yard score. Just barely got to the end zone with Richmond safety Daniel Jones hot on his heels.

Some Struggles with the Option

Offensively, Richmond and quarterback Joe Mancuso posed a different kind of threat than the one the Eagles faced last weekend against Virginia Tech. Mancuso, a 6-foot-4 passer, has the ability to hurt defenses with his legs, and that skill was exemplified against BC’s defense. Mancuso finished as the Spiders’ leading rusher, with 10 carries for 70 yards, and hurt the Eagles both on quarterback draws and option keepers. All in all, the option game was Richmond’s most effective form of offense.

Xavier Goodall broke a 17-yard run off an option play on the Spiders’ first offensive possession of the game, and repeated the feat with an 18-yard carry two drives later. Goodall finished with 36 yards on seven carries, and Savon Smith, another Richmond back, broke free for 66 yards on 10 carries. As a team, the Spiders finished with 215 yards rushing and averaged 4.9 yards per carry. While the Eagles certainly won’t face an option-based rushing attack every week, the amount of space Richmond earned on the ground is something head coach Steve Addazio and his staff will want to take a look at.

Against VTech, BC’s defense demonstrated an opportunistic streak, forcing five turnovers and picking off Hokies quarterback Ryan Willis in the end zone twice. The Eagles weren’t quite able to match the five-turnover performance from Week 1 on Saturday, but still displayed a knack for taking the ball away. First, it was Nolan Borgersen who read Mancuso’s eyes with just under four minutes remaining in the opening quarter. The graduate safety jumped on a slightly overthrown ball near the sideline, going airborne to secure his first career interception. BC would capitalize on the turnover, punching the ball in with a two-yard AJ Dillon touchdown run to go up, 21-0.

Another game, another acrobatic interception. This time it's Nolan Borgersen, who skies up to snag his first career pick. pic.twitter.com/IZgvC67s4X

Later in the first half, it was Tate Haynes’ turn to pick off Mancuso. The redshirt junior rolled out and threw an errant pass while on the run. Haynes showed impressive reflexes to nab his first career interception at the Richmond 17-yard line, though the turnover unfortunately amounted to nothing after the Eagles failed to convert on fourth down four plays later. Nevertheless, it was the second straight week that Haynes—who also forced a fumble with a cornerback blitz in Week 1—was responsible for creating a turnover.

With the game out of hand, both Dennis Grosel and Matt Valecce—the two quarterbacks listed behind Brown on the depth chart—got a chance to see game action. Neither got an opportunity to throw much—Grosel was 1-of-2 for nine yards, while Valecce had no recorded pass attempts—but Grosel was first off the bench, seemingly indicating that he is the backup quarterback for the time being. 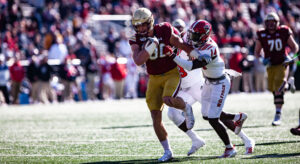