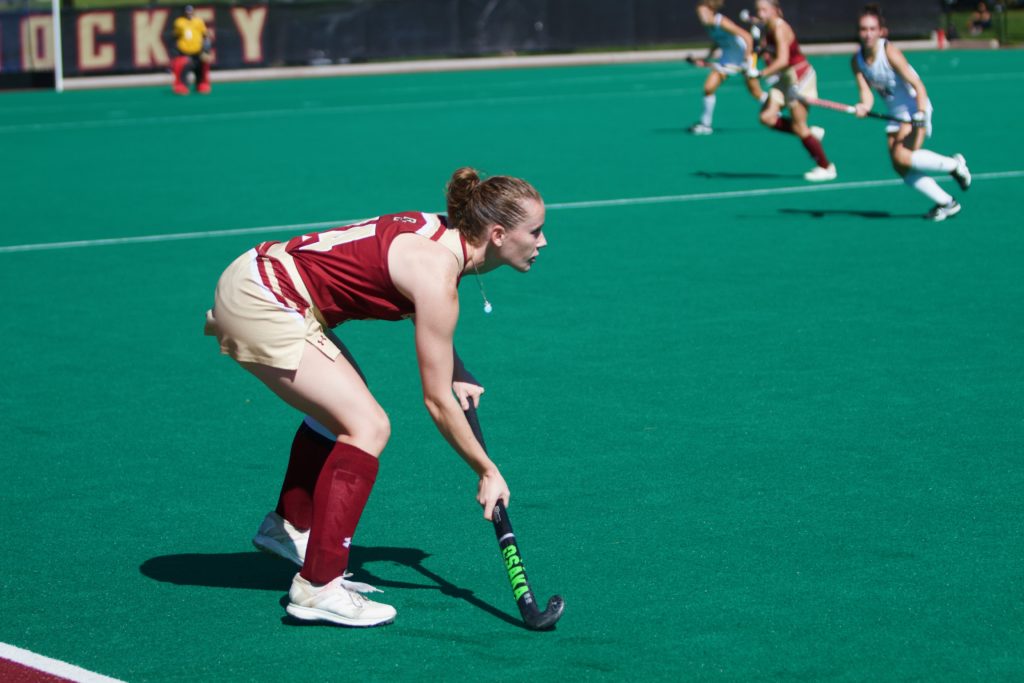 Boston College field hockey entered Sunday’s game with No. 11 Saint Joseph’s aiming to avoid the defensive breakdowns that plagued them in Friday’s loss to No. 6 Louisville.

Instead, the Hawks scored three times with less than a minute remaining in a quarter, eventually tucking away the game-winner with 46 seconds left on the clock as they handed the Eagles a second straight loss, 5-4, in a back-and-forth game that came right down to the final buzzer.

Penalty corners were a significant factor for both sides in Sunday’s match, yet Saint Joe’s (8-1, 1-0 Atlantic 10) got the best of BC (4-5, 1-1 Atlantic Coast) in that department. The Hawks won nine penalty corners on the day, converting three for goals, whereas the Eagles were awarded five and failed to convert on all of them.

“I don’t think we played terribly—Saint Joe’s did a great job of executing on some corners and we made some mental mistakes that allowed them to put some points on the board,” head coach Kelly Doton said. “[But] if you score four goals in a field hockey game you should be able to win that, and our defense certainly let us down today.”

Despite eventually spelling BC’s doom, the Eagles’ defensive shortcomings weren’t prevalent in the early stages of the game, as both teams’ defenses withstood several scoring chances in the outset of the first quarter. BC freshman Charlotte Von Huelsen ended the scoring drought off a rebound with 5:44 left in the first quarter, firing a shot past Hawks keeper Victori Kammerinke. St. Joe’s answered, though, as it forced a penalty corner three minutes later that led to a conversion by Tonya Botherway to even things out—immediately after which Emily Sayre took a centering pass from Sara Hayes and slipped the ball past Eagles keeper Jonna Kennedy to give the Hawks a 2-1 lead going into the second quarter.

The first half of the second quarter again provided a number of opportunities for both teams, including a rush by junior Jaime Natale that ended with a shot that went just wide. Senior Brigid Wood broke away and recorded BC’s equalizer, though, with just under six minutes to play in the half. It looked as if Saint Joe’s might have had a response, as the Eagles gave them another penalty corner with 47 seconds left in the half, but the defense cleared the ball, and the teams went into the second half with a brand new game ahead.

The Eagles’ offense got off to a good start in the back half of play, as freshman Margo Carlin extended her scoring streak to six games, stealing the ball from a Hawks defender in the circle and sending a shot past Kammerinke to give BC a 3-2 advantage. The Eagles had a chance to extend that lead even further within the next minute as they were awarded a penalty corner, but the pass was mishandled and St. Joe’s broke out of the zone.

Shortly after BC’s missed corner chance, the Hawks were awarded one of their own, and Kathrin Bentz scored to even things out once again. Following several more scoring opportunities for both sides, Carlin tapped in a pass in the circle from Natale for her second goal of the game and team-high 10th of the season. It looked as if BC might hold a lead going into the final quarter, but Saint Joe’s rallied again and created a rebound chance that Kacie Patton finished to once again tie it up and set the stage for a dramatic final 15 minutes.

The fourth quarter presented a myriad of opportunities on both sides of the field right up until the final buzzer. Both teams took penalties that resulted in man-advantages for the opposition, but neither resulted in goals. The Eagles also gave the Hawks four penalty corners, one of which resulted in a player hitting the post, and others where Kennedy made huge saves.

As it turned out, the fifth penalty corner of the quarter was the charm for Saint Joe’s, with just 48 seconds to go—and Pepa Serrano fired what would be the dagger into the cage to hand the Hawks a 5-4 lead. The final seconds would see Doton pull Kennedy in a last-ditch attempt to force overtime, but Saint Joe’s shut BC down to wrap up the Eagles’ heartbreaking loss..

BC competed and nearly defeated a streaking Saint Joe’s team but was ultimately outdone by penalty corners and defensive lapses that tipped the scale in favor of the Hawks.

“It’s about everyone getting on the same page right now [defensively],” Doton said. “If you want to be successful in this league, the consistency at defense has to be there.”

BC needs to find that page quickly, as the conference features some of the country’s more explosive offenses. As Doton pointed out, a four-goal output should be more than enough to secure a win, but struggles to contain resulted in a second straight loss that drops the Eagles back below .500 on the season.