Home » Almagro Lectures on Democracy in the Americas 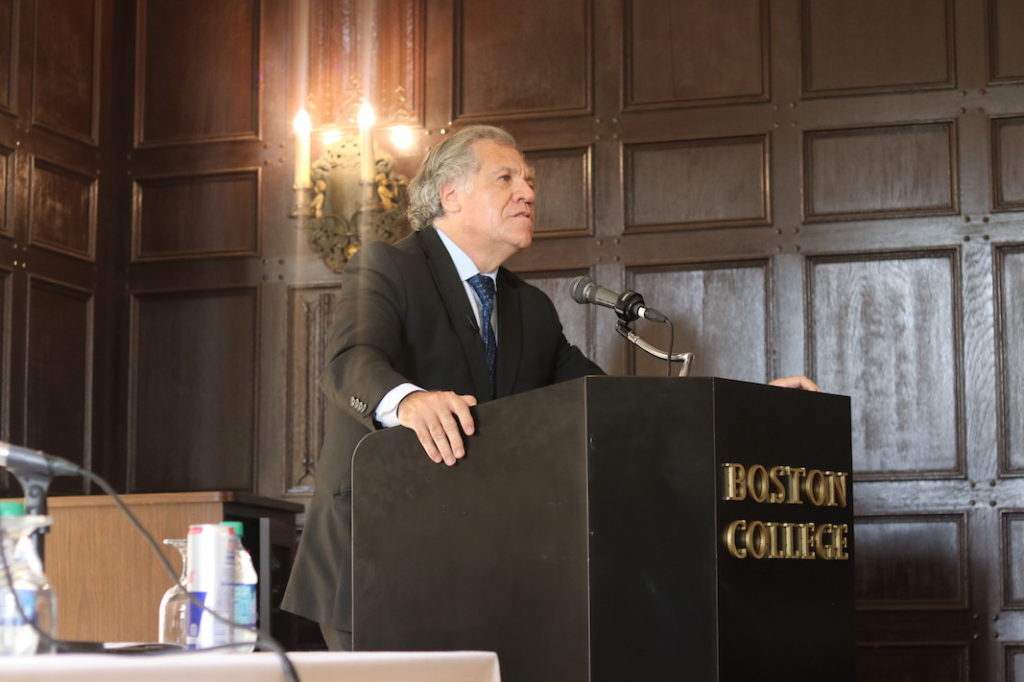 Almagro Lectures on Democracy in the Americas

Secretary General of the Organization of American States (OAS) Luis Almagro spoke about the importance of democracy in the Americas today and his organization’s role in facilitating that democracy at an event hosted by the Boston College Law School’s Clough Center for the Study of Constitutional Democracy on Monday.

Paulo Barrozo, an associate professor at BC Law, gave an introduction highlighting Almagro’s distinguished career in diplomacy. Before being unanimously elected secretary general of the OAS in 2015, Almagro worked as a diplomat for Uruguay in both Germany and Iran, Uruguay’s ambassador to China, and Uruguay’s foreign minister.

Barrozo’s introduction also noted the significance of institutions such as the OAS, which promotes the achievement of peace, justice, and democracy.

“[During] times of crisis, we are reminded of how much we owe to the institutions and the practices and the culture that sustained our practices,” he said. “The Organization of American States is one such institution.”

Almagro began his lecture by stating that the OAS, which was preceded by the International Union of American Republics, has become the leading organization in handling the Western Hemisphere’s affairs and promoting causes to help its people in the past 130 years.

“It is not in vain that the OAS have the center role in dealing with the [Western Hemisphere’s] policy agenda,” Almagro said. “It has a solid … basis to support democracy and human rights. It has a solid basis for protecting people.”

Though some have challenged its mission, the organization has been able to continue fighting to promote its ideals across the Americas, according to Almagro.

“No oppression, no dictatorship, no torture, no assassination was ever able to stop us,” he said.

Almagro explained the necessity of having democracy in the Americas, and in turn, organizations such as the OAS to facilitate such democracy.

One challenge Almagro’s organization faces while trying to improve the lives of people living in the Americas, he said, is the tyrants and dictators who often stand in the way of democracy.

“Silencing people is the strongest way to break people’s serenity,” Almagro said. “We cannot stand by and feel comfortable … witnessing this reality, while at the same time, dictators use new tools to more effectively repress and [to] censor and to hide deprivations that [they] carry out on a daily basis.”

The OAS has taken steps to document instances of human rights violations and has made these documentations available to the public. These documented instances include ones of sexual violence; executions on the basis of race, ethnicity, and gender; and violences against indigenous people, according to Almagro.

The way dictatorships operate has also changed in modern times, Almagro said. Dictators used to independently control their respective governments, but now they are no longer the sole actors in their regimes.

“Their operations are far more complex and more sophisticated than in the past, as they involve the participation of … criminal non-state actors, such as drug cartels, terrorist groups, and transnational crime organizations,” Almagro said.

Almagro then discussed today’s situation in Venezuela, highlighting just how brutal the country’s dictatorship has become. The dictatorship, said Almagro, has destroyed every element of democracy according to the Inter-American Democratic Charter, an OAS agreement that spells out what democracy entails and how it should be defended.

“[The dictatorship in] Venezuela is a prime example of all possible human indecency in one place,” Almagro said.

The international community needs to do more to pressure the dictatorship in Venezuela to change its ways, he said. He added that it is the dictator, not the country’s punishments and tariffs, who is hurting the people.

“We need more sanctions, not less,” Almagro said. “Children are malnourished and were already starving way before the sanctions were applied to the Venezuelan dictator.”

But solving the problems associated with Venezuela also means dealing with the Cuban dictatorship, according to Almagro.

“Cubans have been intervening in Venezuela for years—managing intelligence activity, conducting training in torture, and managing the civil registration system,” he said. “The Cuban way of doing things … has been the system that’s true in Venezuela.”

The dictatorship in Cuba has been overlooked for far too long, and now is the time for the international community to treat Cuba like the ruthless dictatorship it is, Almagro said.

“For far too long, the Cuban dictatorship has enjoyed international impunity,” Almagro said. “The OAS is working to end this shameless impunity. Cuba is not special, and it should not be an exception to Inter-American values and principles that are applied to all member states.”

Almagro ended by assuring the audience that, in the future, people can look toward the OAS as a moral leader and one that will always stand up for human rights and democracy.

“We can rely on [the OAS],” he said. “You can rely on it to have the appropriate responses to justice, to recognize and fight for human dignity, to counter the abuses of power.”

Featured Image by Aneesa Wermers / For the Heights