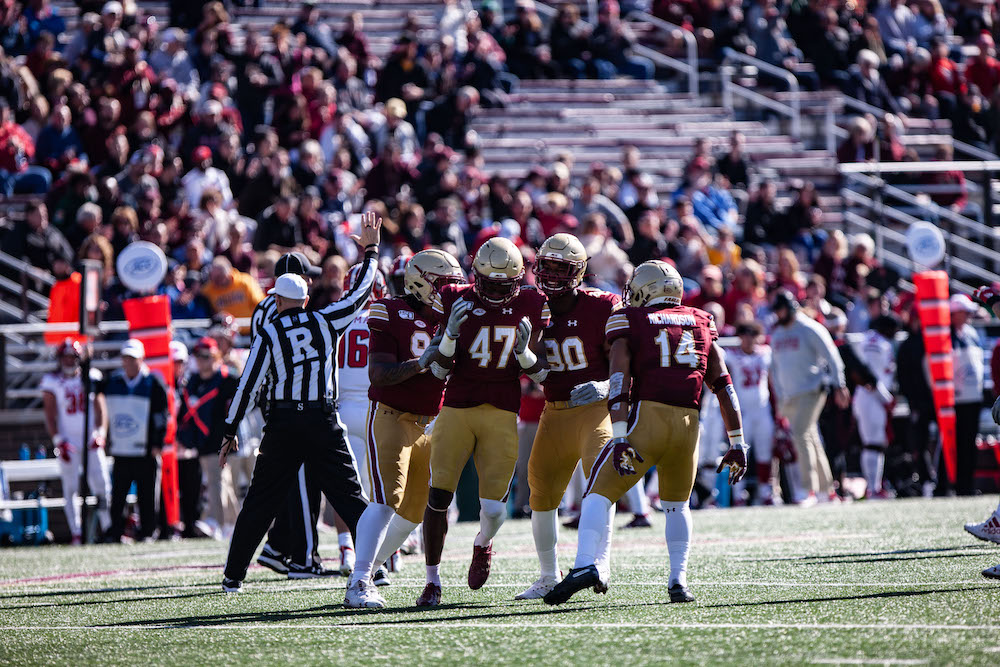 All week, the talk centered around North Carolina State’s run defense, which ranked first in the ACC and fifth in the nation. Although the Wolfpack had yet to face a top-70 rushing attack, it had allowed just 400 yards on the ground all season—head coach Dave Doeren’s team was giving up 66.7 rushing yards per game and 2.4 yards per carry. But come Saturday, Boston College football’s usually porous defense was the one drawing praise.

The Eagles entered the weekend having conceded an average of 476.2 yards per game, and were two weeks removed from allowing Louisville to rack up 664 total yards, the most BC’s given up in a single game—ever. Defensive coordinator Bill Sheridan’s secondary struggled in Kentucky, but the horrid performance started with the run defense, which couldn’t seem to plug holes or even wrap up, a consistent trend throughout the 2019 campaign. Against N.C. State, though, that same run defense looked completely different.

Led by Max Richardson, John Lamot, and Shitta Sillah—a true freshman defensive end playing in his first game since Week 1—the Eagles shut down the Wolfpack’s rushing offense. In fact, N.C. State only gained a total of two yards on the ground through three quarters of play. By that point, AJ Dillon, David Bailey, and the rest of BC’s rushing attack had already gashed the Wolfpack’s stout front seven for 342 yards. After a garbage time-filled fourth quarter, N.C. State ended the game with 56 rushing yards.

To put that in perspective, BC came into the game ranked 101st in the nation in run defense. The Eagles were giving up 191.8 rushing yards per game. And, all in all, Sheridan’s crew limited the N.C. State offense—albeit one of the weaker units in the ACC that’s yet to settle on a quarterback—to just 366 total yards, 115 of which came in the final frame. So how did BC do it?

Getting Out of the Blocks Fast

For the first time all year, an Eagles opponent didn’t find the end zone in the first quarter. The Wolfpack would have to wait till the third quarter to do that. There were no backbreaking coverage breakdowns or egregious missed tackles in the opening stanza. Instead, BC stitched together its most impressive defensive sequence of the season.

The Eagles kicked off the game by forcing back-to-back N.C. State three-and-outs, thanks to Sillah’s first career sack and, on the ensuing drive, Richardon’s ability to read a Wolfpack screen and tackle Thayer Thomas 11 yards short of the first-down marker.

Then, three plays after BC downed a Grant Carlson put at the N.C. State 1-yard line, Richardson pressured Wolfpack quarterback Bailey Hockman, causing the redshirt sophomore to throw an ill-advised pass in the direction of Devin Carter. BC’s Jason Maitre was all over it. The redshirt freshman cornerback made a play on the ball, and sprinted into the end zone for an eight-yard pick-six. Just like that, the Eagles were on the board with their ninth interception of the year, tied for 11th-most in the nation. Sheridan’s defense had set the tone, and Dillon and Bailey carried things from there.

Getting into the Backfield

The N.C. State rushing offense is far from spectacular. The Wolfpack only averaged 96 yards on the ground in its first two ACC games of the season. So, BC holding the tandem of Zonovan Knight and Jordan Houston to just 51 yards isn’t necessarily a season-defining achievement. That said, it was a dominant and promising performance nonetheless. And that’s because BC made a home for itself in the backfield—both in defending the run and the pass.

Before Saturday, the Eagles had an ACC-worst five sacks on the season. But they brought down Hockman in the first quarter, as well as his replacement—Devin Leary—in the second frame. Just like against Wake Forest in Week 5, Sheridan found success dialing up blitz packages for his defensive playmakers to shoot up the gut for momentum-shifting sacks. Both cost the Wolfpack at least seven yards.

In terms of defending the run, the Eagles were quick off the edge, typically forcing the Wolfpack inside and swarming ball carriers before they got back to the line of scrimmage. A lot of BC’s missed tackles this season have come at the second and third level, but N.C. State’s running backs hardly ever got there on Saturday. Here’s one such example:

With about five-and-half minutes to go in the game, Leary received the snap and handed it off to Houston. The problem was, as soon as Houston took the ball, Sillah was about a yard away from him. In no time, the athletic defensive end tackled the N.C. State running back behind the line of scrimmage. Time and time again, pressure off the edge and subsequent containment resulted in success for Sheridan’s defense.

Anyone that’s watched BC this year knows how bad the Eagles have been defending third down this season. Prior to Saturday, head coach Steve Addazio’s team had allowed opponents to convert 48.5 percent of the time. Remember, against Wake Forest, BC allowed the Demon Deacons to move the chains on 17 of their 24 third downs. Heading into their matchup with N.C. State, the Eagles were ranked near the bottom of the FBS in third-down defense, but they moved the needle in the right direction on Saturday.

For just the second time this season, BC held a Power Five team under a 44 percent third-down conversion rate (also did so at Rutgers). The Eagles only allowed the Wolfpack to move the sticks 23.5 percent of the time (4-of-17), the lowest conversion rate of any BC opponent this year. The Eagles’ success was rooted in their early-down plays.

Even though BC has done a good job bringing up third downs in 2019, most of them have been more than manageable for opposing offenses to convert. On Saturday, however, N.C. State faced an average distance of 8.4 yards to go on third downs, in large part because of the Eagles’ much-improved run defense. When backed up, the Wolfpack squandered, converting just 1-of-7 3rd-and-Longs (nine-plus yards or more).

Before Saturday, BC had allowed its first six opponents to score, on average, on 95.7 percent of their red zone trips, ranking 125th nationally in that department—more simply, the fifth-worst red zone defense in the country. On paper, it looked like a rough matchup for Addazio and BC, considering that N.C. State was incredibly inefficient inside its opponents’ 20-yard line. Although the Wolfpack has been offensively challenged at times this year, it came into the weekend 24-of-25 on its red zone opportunities.

But, like the other stats heading into the Atlantic Division matchup, the ones pertaining to the red zone hardly mattered. BC buckled down inside its own 20, and the Eagles came up with two red zone stops—one more than they had all year—both of which occurred on the goal line.

In the first quarter, the Eagles strung together three straight stops within their 6-yard line, making Hockman throw on 4th-and-Goal. His pass sailed out of bounds, and BC took over on downs.

One quarter later, the Eagles once again held, this time within their own 7-yard line. Leary received a snap out of the shotgun on 4th-and-Goal, dropped back, and rifled a pass intended for Emeka Emezie to the bottom corner of the end zone. The attempt was on target, but Brandon Sebastian was there to break it up—one of a season-high seven passes defended by BC on the day.

The Eagles very nearly staged two more goal line stands, but a pair of 4th-and-Goal touchdown passes from Leary in the fourth quarter made the score a bit more respectable.

After Saturday, the N.C. State offense now ranks just 11th in scoring in the ACC, and the Wolfpack has already tried out three quarterbacks this season. It looks like Doeren might have his guy in Leary, but the drop-off from N.C. State’s Ryan Finley-led offense is clear. Still, BC brought the pressure, stopped the run, and upped the ante in the red zone, and that’s a recipe for success against any opponent. Of course, the Eagles will have to do all of that and more against No. 3 Clemson next Saturday.