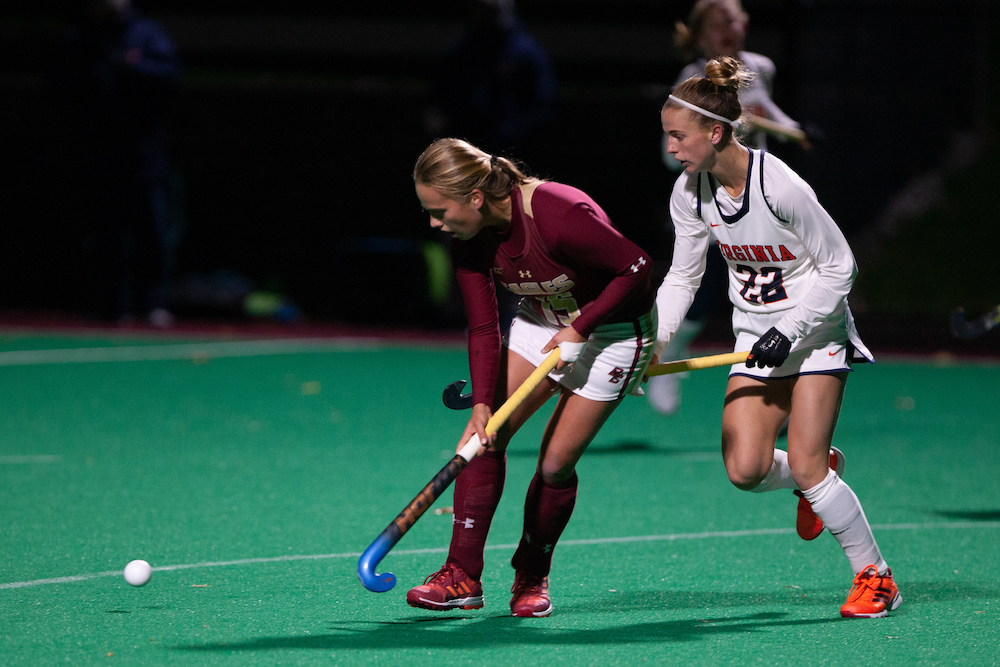 Boston College field hockey made history on Friday evening, and it did so in dramatic fashion.

Facing off against No. 4 Virginia in the ACC Championship semifinals, the ninth-ranked Eagles and goaltender Sarah Dwyer stood tall on their home field through a scoreless regulation. Then, just under five minutes into overtime, BC’s Fusine Govaert broke through a pair of Cavalier sticks and unleashed a bullet of a backhanded shot that soared into the back of the cage and handed her team a thrilling 1-0 victory.

The win advances the second-seeded Eagles (13-6, 4-2 Atlantic Coast) to their first ACC Championship game appearance in program history. BC will play undefeated and top-ranked North Carolina in Sunday’s title matchup at 11 a.m. in Newton.

Govaert scored the game-winner after a scramble for the ball. Teammate Margo Carlin broke into the circle and played it to Govaert, who took a touch and somehow managed to get the ball free from the UVA (16-4, 4-2) duo of Amber Ezechiels and Erin Shanahan. Shanahan kept up the pressure, but Govaert took one more touch near the end line before loading up for the backhanded finish.

It was the junior’s eighth goal of the season as she only continued to prove she’s not afraid of the big stage. In the regular season finale against No. 5 Duke—who fell to the Cavaliers in the ACC quarterfinals on Thursday night—Govaert scored the decisive goal in the 50th minute of a 1-0 victory. She didn’t just impress offensively, though. Govaert came up with one of the biggest saves of the game on UVA’s only penalty corner of the first half, standing tall next to Dwyer and batting a would-be goal out of the game with her stick.

Dwyer was nothing short of dominant throughout the match, extending her shutout streak to an astounding 186 minutes. The reigning NFCHA D-I Defensive Player of the Week, Dwyer was on her game throughout, and she had to be—the Eagles’ offense struggled to generate many chances on frame. Dwyer withstood a second-quarter surge from UVA in which the visitors racked up five shots on goal but they were all swallowed up by the senior goalkeeper.

After being deadlocked at the half, the two teams came out with the sun setting in the third quarter. The drop in temperature—it was estimated that, with wind, the “feels like” temperature was 23 degrees—saw several players come up slowly after absorbing hits.

Both teams passed more sharply out of the break, but nothing much was going offensively. BC had a pair of penalty corners deflected away and then Eagles defender Sky Caron came up with a big clear in the final four minutes. Jaime Natale had a good look near the close of the quarter for the hosts, but whiffed from the right of the goal.

In the fourth quarter, scoring opportunities started to come more easily. The Cavaliers had a good look on a penalty corner just two minutes in. After inserting the ball, Anzel Viljoen stood in front of Dwyer and nearly deflected a shot in but instead it soared high. Then, UVA’s Rachel Robinson mirrored Govaert’s goal-line stand with one of her own, dropping her stick down to deny a low shot from Govaert.

The final five minutes were largely devoid of action, and it was fitting that the game went to overtime. While BC had managed just two shots on net, it had several opportunities that went just wide and was nearly equal in overall shots with eight to UVA’s 10.

The NCAA removes four players for overtime, resulting in 7-on-7 action that is played at a much quicker pace than regulation. With frequent substitutions, the teams traded runs for the first few minutes. The Eagles had the first real chance, with Govaert streaking up the middle of the field, but she tried to find Elizabeth Warner and her teammate couldn’t keep her balance, breaking into the circle. Just two minutes later, though, BC was celebrating Govaert’s stunning goal and its second win in as many days.

The significance of the victory—both for the players and head coach Kelly Doton—can’t be understated. Before this year, the Eagles had gone just 1-14 in the annual postseason tournament, and that lone win came under Doton back in 2015. It’d been three straight first-round exits, but now, with the tournament on the Eagles’ home field, they’ve won back-to-back games and have a chance to clinch their first conference championship—and the first for BC since men’s soccer won in 2007. BC already has an NCAA berth locked up but now have the potential to become automatic qualifiers with a legitimate chance of making serious noise in a crowded field.