Home » In Response to: “To Compete with Top-Ranking Institutions, BC Should Take Koch Foundation’s Funding”
Opinions, Letters To The Editor

In Response to: “To Compete with Top-Ranking Institutions, BC Should Take Koch Foundation’s Funding”

We live in an era of outsize influence of the ultra-wealthy in our institutions. Lobbying has never been so profitable and so widely used. A single large donation to a politician’s campaign often is enough to make said politician make a 180-degree turn on a policy issue. Our regulatory agencies have been captured and regularly side with big business against consumers and workers. Washington works with unimaginable efficiency and diligence for the wealthy, and for the wealthy only. And we see the results of this: our political economy is upside-down. Income inequality is at a 90-year high, and millennials and Gen Zers are expected to have a worse quality of life than their parents—something that had never happened before in American history. In short, we are fast approaching a postmodern version of the Gilded Age.

The intellectual justification for most of the policies that set us on this path—the embrace of the dogma of making every market as unregulated as possible, no matter its structure—comes largely from the work of University of Chicago Professor Friedrich Hayek and his disciples. It turns out that Hayek only got his chair at the University of Chicago, from where he built his movement of free market fundamentalists, because he was sponsored by a libertarian millionaire, William Volker. Or said in a less euphemistic way, Volker bought Hayek a chair in a prestigious university so that Hayek could influence the American political economy in a way that would explicitly benefit Volker and his peers to the detriment of everyone else.

This kind of debasement of academic standards is common today—a rot that threatens good social science to the benefit of a privileged few. Boston College, as a Jesuit liberal arts college, has a duty to reject the Kochs’ offer of academic bribe. But BC should also reject it because it does not need the Kochs’ money. For one, accepting a bribe that actively hurts good academic practice will not, in the end, result in a better standing for BC in an era where increasing emphasis is (finally!) being put on the methodology of the social sciences. Furthermore, BC has talented alumni who gained a lifelong concern for society as a result of their Jesuit education, and who’d be more than willing to give to the political science department should the University ask them so, but who would likely feel less compelled to donate to an academic department they’d (rightly) feel is corrupt.

And lest we forget: the Kochs would be responsible for much of the damage that would ensue should we lose the fight against climate change—from tens of millions of climate refugees to cities underwater. All of the good the Kochs have done through charity pales in comparison to the value of damage they have done by corrupting our institutions. In the end, accepting a donation from the Kochs is no different from accepting a donation from Harvey Weinstein or from Jeffrey Epstein’s estate. Our morals and our academics are not for sale. 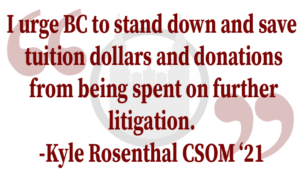