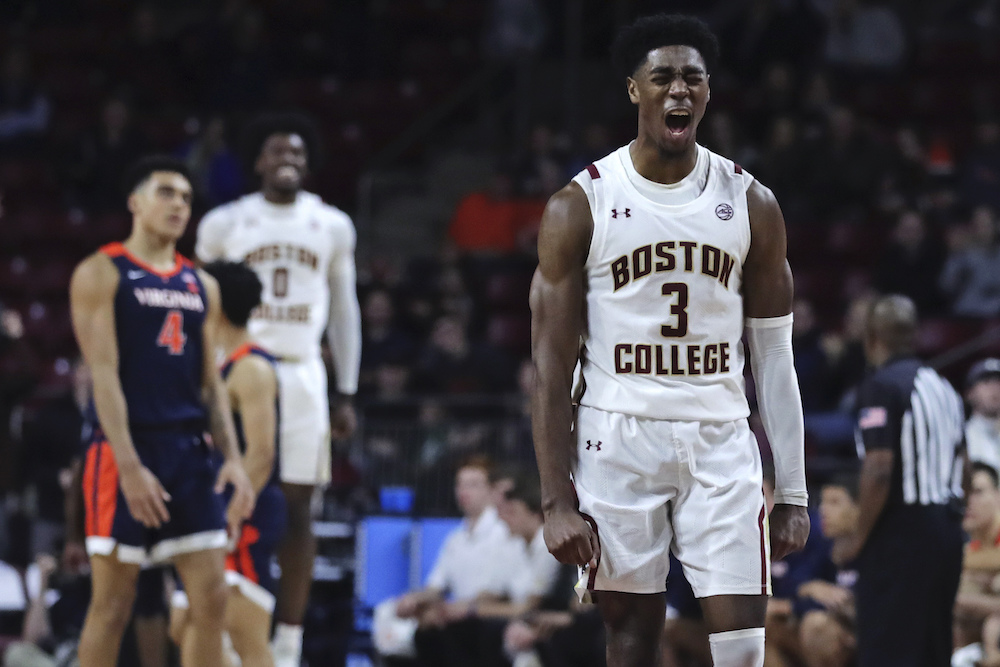 Freshmen Shine as BC Stuns Virginia, 60-53

It was just last April that then-No. 1 Virginia won it all in the national championship game against Texas Tech, after enduring a heartbreaking loss in the first round to No. 16 UMBC the year before. Then, fast forward to this year’s first matchup between the No. 18 Cavaliers and Boston College men’s basketball. Following a blowout loss to Duke in their previous ACC match, the Eagles faced another top-25 conference rival, and BC was on the hunt for an upset. The Eagles managed an incredible bounce-back victory, handling Virginia 60-53.

With Nik Popovic and Derryck Thornton out for the game with back and ankle injuries, respectively, much of the weight fell on the shoulders of the team’s newcomers. As a first-year guard, Jay Heath had much to prove against the veteran Virginia defense, and he by no means shied away from the challenge. Heath finished the night with an impressive 17 points and a clutch performance to close out the second half.

Heath picked apart the Cavaliers’ defense over and over again, and the freshman rose to the challenge at every scoring opportunity. Early in the game, Heath brought the Eagles to a 10-point lead when he nailed his second 3-pointer of the night with a Virginia defender’s hand in his face.

The other freshman to come in clutch was C.J. Felder. The big man’s offensive stat lines didn’t reflect his play, but he consistently went at the nation’s top defender, Mamadi Diakite, forcing him to commit two fouls early and be taken out of the game.

In the second half, Felder took advantage of the then-cautious Diakite by using his first step and getting past the defender to finish with a well-executed layup at the rim. A couple drives later, Felder again drove right at Diakite and side-stepped him to finish his layup and avoid the charge. Yet again, Diakite committed the foul and was pulled from the game.

The climax of the game was a true barn burner. The Hamilton brothers, Jairus and Jared, put up numerous off-kilter shots that miraculously found the net. One of the more notable attempts came from Jared Hamilton as he spun around and shot a no-look left-handed heave that perfectly swished through the rim. This shot came on the tail-end of a 10-point Virginia run that began when BC held a 12-point lead.

With the score within two, UVA’s Kody Stattman, who had gone on a bit of an offensive tear in the second half to give the Cavaliers a much needed boost in scoring, had an impressive floater shot of his own as he bodied up the BC big men in the paint.

After an impressive defensive standing by BC, UVA’s Kihei Clark knocked down one of the few threes all night for the Cavaliers as the shot clock expired. UVA struggled find a 3-point rhythm all game, ending up going a measly 3-16 from beyond the arc.

With BC down three, the Eagles’ freshman hero, Jay Heath, rose to the occasion once more. He went right at his defender and narrowly managed to get his shot off and draw enough contact for an and-1 call. With the game tied, Heath had one last moment of heroism, although this time it would be his court-vision that would save the day.

Heath, with defenders draped all over him, cut down the lane and, realizing he did not have an open shot, kicked to a wide open Jared Hamilton in the corner. Much like his other shots all night, Hamilton was ready and waiting, and he notched another perfect bucket to bring his total to 16 on the night.

With a bad offensive possession by UVA ending in a turnover, the Eagles would head to the line two more times, and both Jared Hamilton and Steffon Mitchell would convert on their foul line attempts to ice the game and give the Eagles a seven-point victory.

Tuesday’s game was truly an impressive win for the Eagles. Only three teams (now including BC) have put up 30 points on UVA in a half, and all those teams have beaten the Cavaliers this year. The matchup was also just the third time that Virginia had trailed by 10 or more points this season.

Eagles fans have not seen a 3-1 start in the ACC for a long time. With their one loss coming in a blowout against Duke, the look Christian’s squad will take on in subsequent ACC play remains in question. For now, however, the Eagles are flying high in the ACC standings, and a big win against last year’s national champions is another great victory to boost morale and momentum.